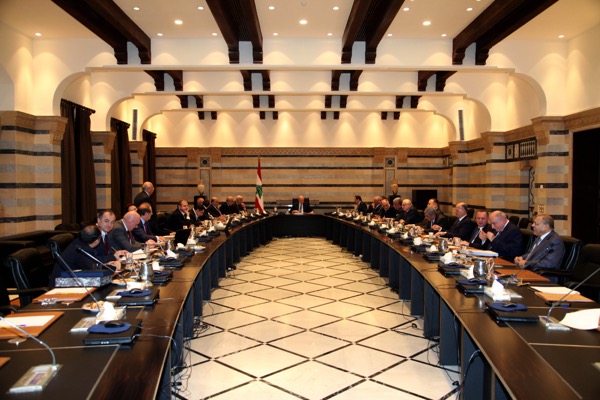 The cabinet on Monday approved a plan to export the garbage as a “temporary” measure to the waste disposal crisis, despite the objections of the ministers of the Free Patriotic Movement and the Phalange  Party.

“We have overcome a huge burden that was pressuring Lebanon and the Lebanese,” Prime Minister Tammam Salam announced after the session.

“The garbage exportation solution was reached amid procrastination and obstruction in the country and amid a tense political situation. It was reached after a several  disputes and disagreements that led us to the current situation,” Salam added.

“This is a temporary and transitional solution and I hope it will be a lesson to everyone on the need to avoid political bickering … We are amidst organic, household and municipal waste, but we are also suffering from ‘political garbage’,” the PM said.

Noting that the country needs a “sustainable waste management solution,” Salam pointed out that Lebanon must “use garbage to produce electricity.”

The resolution was passed despite the objections of the ministers Elias Bou Saab of the FPM and Sejaan Qazzi and Alain Hakim of Kataeb. Kataeb’s minister Ramzi Jreij voiced reservations.

Foreign Minister and FPM leader  Gebran Bassil  did not attend the session.

“Bou Saab told Salam that passing such a decree despite the objections of two main parties must not become a rule that governs cabinet’s work or a reason to change the current mechanism,” MTV said.

According to Agriculture Minister Akram Shehayyeb, exportation will cost $212 per metric ton. This is more than 5  times what Jordan pays

Amman, Jordan reportedly pays $38 per ton to manage its garbage.

“During the cabinet debate, Salam intervened several times, demanding decisiveness and criticizing the rejection of all solutions,” LBCI television said.

Prior to the session, Finance Minister Ali Hassan Khalil told reporters that he does not support “increasing  gasoline prices” to fund the garbage exportation plan.

Bou Saab for his part noted that he would raise “many questions about the funding sources, especially regarding public funds and the municipalities’ revenues.”

The session was accompanied by a protest outside the Grand Serail by civil society activists.

Denouncing the manner in which the government has handled the waste management file, the activists warned authorities against “approving the exportation of garbage or hiking gasoline prices.”

“This would mean that corruption has not ended,” the activists noted.

They had long called for an eco-friendly solution to the garbage crisis that involves more recycling and composting to reduce the amount of trash going into landfills and a bigger role for municipalities.

Lebanon has been suffering from a waste management crisis since July when the Naameh landfill that receives the trash of Beirut and Mount Lebanon closed.

The government’s failure to find alternatives led to the piling up of garbage on the streets and in random locations, which raised health and environmental concerns and sparked unprecedented street protests against the entire political class.