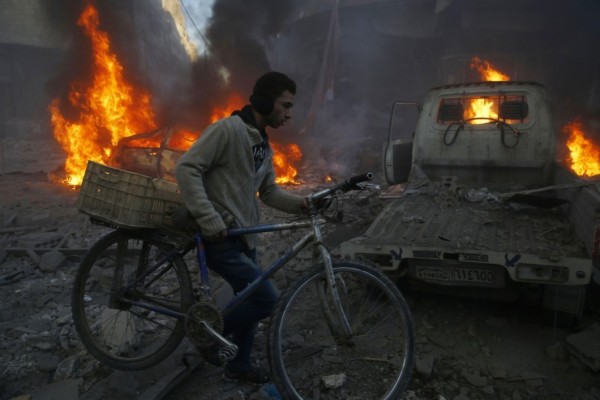 The aftermath of an attack in the town of Hamouria in a rebel stronghold east of Damascus on Dec. 9. The Syrian Observatory for Human Rights reported at least 11 civilians, including four children, were killed in strikes on the town but said it was unclear if they were carried out by Russian or regime aircraft. (Sameer al-Doumy/AFP/Getty Images)
Share:

By Hugh Naylor
The latest images depict a tragedy that repeats itself over and over again in the rebel-held suburbs of Syria’s capital.

Terrified children are seen crying amid the dust-covered rubble caused by government air raids that struck last Sunday and Monday. Men carry the limp bodies of victims — people who only moments earlier could have been heading to the market or walking children to school.

Residents of Douma, a community just a few miles northwest of Damascus, are no strangers to indiscriminate bombings by President Bashar al-Assad’s warplanes. In August, more than 100 people were killed in a single day by airstrikes that targeted a crowded outdoor market in the area.

On Sunday, the grisly routine struck Douma and neighboring communities yet again, this time killing children, a school principal and many others, according to activist groups that monitor Syria’s nearly five-year-old crisis. At least 49 people were killed, but the death toll probably climbed after what activists and residents said were raids on the community the following day by Assad’s helicopter gunships.

The latest round of violence appears to have been triggered by rebel groups in the area firing an unusually intense salvo of mortars at government-held areas of the capital. State media said those attacks killed three people and wounded 30.

In Syria, where more than 250,000 people have been killed since the conflict erupted in 2011, such carnage has become commonplace. But the constant stream of photographs and video images posted on social media continue to reveal to the world just how extraordinary the suffering of civilians in places such as Douma has become.

That suffering included a group of children who were purportedly filmed in the direct aftermath of the attacks on the suburb earlier this week. In one image, a little girl covered in dust is crying. A civil defense worker then carries her to cover in the back of vehicle.

Moments later, a young boy emerges from a cloud of debris, running toward them and pleading for help. “I want my mother!” he yells.

His mother is nowhere in sight.