‘Dean of Lebanese Prisoners’ killed by an Israeli airstrike in Syria 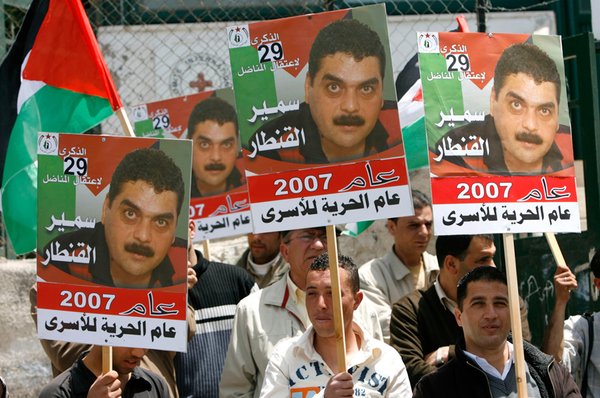 In this 2007 file photo protesters are holding posters of Samir Kuntar . The posters call for his release from Israeli jail . He was released a year later in a prisoner swap with Hezbollah
Share:

Samir Kantar, a Lebanese who was convicted of carrying out one of the most notorious attacks in Israeli history and spent nearly three decades in an Israeli prison, has been killed by an Israeli airstrike near the Syrian capital, the Lebanese Shiite Hezbollah group said Sunday.

Hezbollah said Kantar, known in Lebanon as “The Dean of Lebanese Prisoners” for being the longest-held prisoner in Israel, was killed along with eight others in the strike in the Damascus suburb of Jaramana Saturday night.

Hezbollah’s Al-Manar TV said two Israeli warplanes that violated Syrian airspace fired four long-range missiles at the residential building in Jaramana. It aired footage of what it said was the building, which appeared to be destroyed. Kantar’s brother, Bassam, confirmed his “martyrdom” in a Facebook post on Sunday.

Syrian state news agency SANA said Kantar was killed in a “terrorist and hostile missile attack on a residential building.” SANA did not mention Israel in its report on the strike, which it said killed several people.

Israeli Cabinet minister Yuval Steinitz said he was not sorry about Kantar’s death but could not comment on the accusations that Israel was behind the killing.

“If something happened to him I think that no civilized person can be sorry. But again I learned it from the reports in the international media and I can make no concrete reference to it,” he said.

Israeli Prime Minister Benjamin Netanyahu did not comment about the strike in his weekly Cabinet meeting.

Al-Mayadeen said that Farhan al-Shaalan, a senior commander with the anti-Israeli “resistance” movement in the Golan Heights, was also killed in the air raid together with an aide to Kantar.

Israel possesses long-range air to surface missiles that conceivably could have been fired from Israeli-controlled airspace. The Golan Heights are only about 40 kilometers (25 miles) from Damascus.

Israeli warplanes have struck targets inside Syria several times during the country’s nearly five-year conflict although it has rarely confirmed its involvement.

Kantar’s killing, however, would mark the first Israeli assassination of a senior figure inside Syria since Russia launched its military operations in Syria on Sept. 30 in support of President Bashar Assad.

Israel’s defense minister has said that Russia and Israel have worked out an open communication system “to prevent misunderstandings.” That raises the question of whether the Russians would have been informed by Israel about the operation to assassinate Kantar.

The Russian Defense Ministry declined comment on the airstrike.

The Lebanon-Israel border was quiet but tense on Sunday afternoon. Lebanon’s state-run National News Agency said Israeli forces were on high alert near the border with Lebanon and moved patrols far from the border fence. NNA added that U.N. peacekeepers have intensified their patrols in the border areas.

Hezbollah legislator Ali Ammar vowed that Kantar’s death will not go unpunished adding that military commanders will decide how to avenge the killing.

Kantar and four Hezbollah guerrillas were freed in 2008 in exchange for the bodies of two Israeli soldiers captured by Hezbollah in 2006, whose capture sparked a 34-day war between Israel and Hezbollah. His release was highly controversial in Israel, where he is believed to be the perpetrator of one of the most grisly attacks in Israeli history.

As a teenager, Kantar joined a Palestinian militant group known as the “Palestine Liberation Front” at the height of Palestinian-Israeli violence in the Middle East and at a time when most Palestinian groups were based in Lebanon.

Kantar was imprisoned in 1979 in Israel and sentenced to three life terms after he and three other Lebanese infiltrated the Jewish State in 1979 and staged an attack in the northern coastal town of Nahariya, killing a policeman and then kidnapping a man, Danny Haran, and his 4-year-old daughter and killing them outside their home.

Israel says Kantar, who was 16 at the time, beat the girl to death by bashing her head with a rifle butt. He denies this, saying the girl was killed in the crossfire. As the attack unfolded, the girl’s mother, Smadar Haran, hid inside a crawl space inside their home and accidentally smothered their crying 2-year-old daughter, fearing Kantar would find them.

Israel held on to Kantar for decades, hoping to use him as a bargaining chip to win new information about an Israeli airman whose plane crashed in Lebanon in 1986. It ultimately traded him in 2008 along with four other Lebanese prisoners in exchange for the bodies of two of its soldiers.

Hezbollah leader Sayyed Hassan Nasrallah insisted at the time that Kantar be included in any swap.

Kantar, 53, received a hero’s welcome upon his return to Lebanon. Assad awarded him the country’s highest medal during a trip he made to Damascus that year.

Soon afterward, Kantar, a Druze, joined Hezbollah, his role growing quietly within the group’s ranks particularly following the group’s involvement in the civil war in Syria in support of Assad’s forces.

In September, the U.S. State Department added Kantar to its Specially Designated Global Terrorist over his work with Hezbollah.

Kantar is the most high profile Hezbollah fighter to be killed since last year.

Lebanon-based Al-Mayadeen TV said Kantar had been living in the targeted building for a year. The station, which is close to the Syrian government and Hezbollah, said Kantar and one of his aides were killed.

Several of Hezbollah’s allies in the region condemned Sunday the assassination of Kantar
Syrian Prime Minister Wael Halaqi condemned the attack, saying targeting Kantar was equivalent to “targeting the axis of resistance,” referring to Syria and its allies.

Iran, a close ally of Hezbollah and the Syrian regime, called it an “assassination” that was a “violation of an independent country’s national sovereignty and territorial integrity.”

In Gaza, Palestinian group Hamas condemned what it called “the Israeli assassination crime” against Kantar.

“Apart from our political differences with regard to the Syrian crisis, we denounce targeting Samir al-Kantar with an Israeli air raid in Jaramana that led to his death. He will continue to be a symbol of struggle and steadfastness”, said Jumblatt in a statement.

“The martyr Kantar has devoted his life to confront the Israeli occupation, and had spent decades in solitary detention without backing down on his positions and principles,” added the PSP chief.

For his part, MP Marwan Hamadeh also denounced the act, he said: “Israel’s criminal act in Jaramana is but a continuation of the Israeli approach based on murder, treachery, destruction.”

“Through this crime, the Zionist enemy aimed to raise the morals of its soldiers, and has therefore made a grave mistake and will bear its consequences.”