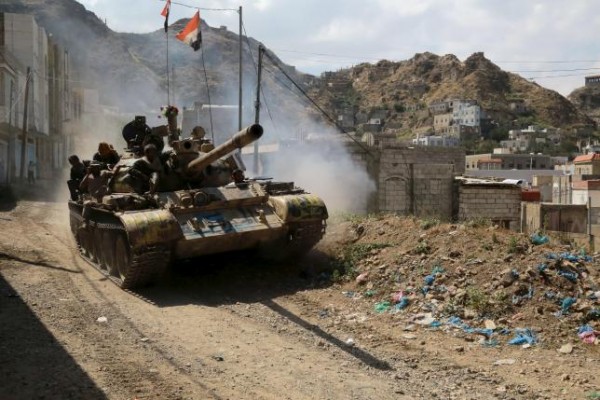 Soldiers loyal to Yemen’s government ride atop a tank in the country’s southwestern city of Taiz December 16, 2015. REUTERS/Stringer
Share:

The one-week truce was declared to aid the chances of success of peace talks that were expected to resume in Switzerland on Friday, in an effort to end the civil war that erupted in Yemen last year.

Al-Hazm, capital of the northwestern al-Jawf province, had been under the control of the dominant Iranian-allied Houthi group until the pro-Hadi forces captured it after two days of fighting.

The sources said the Hadi loyalist troops had also gained control of al-Labnat military base near al-Hazm, which had been under the control of the Houthi militia and their allies, fighters loyal to former President Ali Abdallah Saleh.

The impoverished country was plunged into war when the Houthis seized the capital Sanaa and marched south, triggering a Saudi-led military intervention in March.

Saudi state news agency SPA cited the Saudi-led coalition of mainly Gulf Arab states as saying two missiles had been fired from Yemen toward Saudi Arabia in the latest fighting.

The coalition said the first was repelled and fell inside Yemeni territory near Marib and the other fell in a desert area east of the Saudi city of Najran.

“The leadership of the coalition asserts that while it is committed to the success of the negotiations in Geneva … it will not abide by the ceasefire for long in the shadow of this threat to the kingdom’s territory,” SPA said.

Each side has accused the other of repeated violations of the truce, which was supposed to begin on Tuesday.

The U.N.-sponsored peace talks began away from television cameras on Tuesday in the hope of ending nearly nine months of conflict that have killed almost 6,000 people and displaced millions.

Sources close to the talks said direct talks between Hadi’s government and the Houthi group had been suspended since Wednesday evening, after the Houthis rejected demands for the release of detained senior officials, including Defense Minister Mahmoud al-Subaihi and Hadi’s brother Nasser.

In Geneva, U.N. spokesman Ahmed Fawzi said on Friday: “We expect the talks to continue. We continue to work with both sides. Sometimes we are working in separate sessions, sometimes together, based on what we think is more effective.”

On Thursday, the U.N. Special Envoy for Yemen, Ismail Ould Cheikh Ahmed, said the third day of peace talks had produced “a major step forward” on the humanitarian front – agreement on aid for the war-torn city of Taiz – that would pave the way to further agreements on aid and other issues in coming days.