Even Putin jumps on Trump’s bandwagon, singles him out as an ‘absolute leader’ 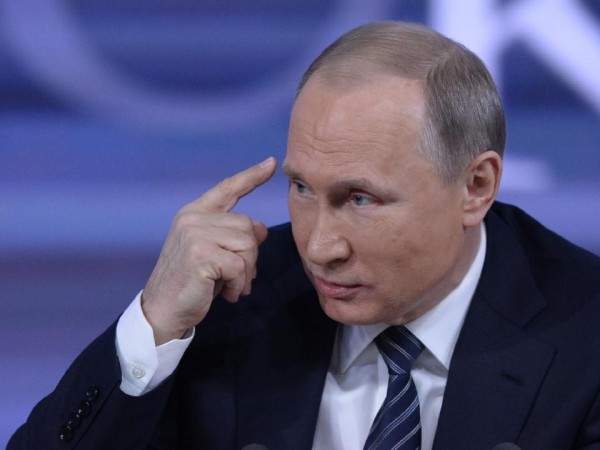 Russian President Vladimir Putin praised the then Republican presidential hopeful Donald Trump during his annual press conference in Moscow, on December 17, 2015. singled him out as an absolute leader. (AFP Photo/Natalia Kolesnikova)
Share:
By Andrew Roth

Russian President Vladi­mir Putin ranged from conflict zones to U.S. politics Thursday in a news conference that tried to close gaps with Washington over Syria, noted that Moscow remained engaged in Ukraine and gave a nod to Donald Trump as the “absolute leader” in the White House race.

Putin — over three hours of questions and some overtime remarks — also touched on Russia’s battered economy and tense relations with Turkey over the downing of a Russian warplane.

Many of Putin’s comments circled back to relations with the United States, including a bit of look-ahead musing on the White House race. Putin said Russia would work with “whomever the American voters choose,” but singled out Trump.

“He’s a very lively man, talented without doubt,” Putin said according to the Interfax news service after the three-hour news conference. He added that Trump is the “absolute leader in the presidential race.”

“He’s saying he wants to go to another level of relations, closer, deeper relations with Russia,” Putin continued. “How can we not welcome that? Of course we welcome that.”

Trump in October gave a similar assessment of Russia’s leader, saying he could “get along very well with” Putin despite differences.

During the news conference, Putin denied once again that regular Russian forces were in Ukraine, where pro-Moscow rebels began clashes with the Western-backed government in 2014. But Putin hinted that Russian military advisers or security forces were active in that country, a fact that he and senior Russian officials have sharply denied that in the past.

“We never said that we did not have people there who are dealing with certain issues,” Putin said of southeast Ukraine, the base for the separatists. “But there are no regular Russian troops there. Feel the difference!”

Putin’s statement came after a Ukrainian journalist “passed on a hello from Capt. Erofeyev and Sgt. Alexandrov,” two alleged Russian servicemen captured by Kiev whom Russia said quit the army before going to Ukraine.

The format of the yearly news conference is a spectacle in itself: Nearly 1,400 journalists jostle with one another on national television for the opportunity to pose a question to Putin.

Putin answers questions in monologues that can stretch as long as 10 minutes, making follow-up questions difficult.

Asked about Russia’s intervention in the civil war in Syria, Putin said that Russian forces would remain there at least until a democratic process is launched.

“There is a plan,” Putin said. “In its key aspects, it coincides with the American plan: working on the constitution, preparing elections in Syria and the recognition of their results. But for now we are going to launch strikes and support the Syrian army in its offensive.”

But the United States and Russia differ sharply over Syrian President Bashar al-Assad. Washington and its allies insist Assad has no role in Syria’s political future. Russia and Iran, however, are key backers of Assad and will likely resist any outcome that lessens their influence in Syria.

Russia began airstrikes to back Assad in September, but recently Russian analysts and government officials have expressed frustration with the slow speed of the offensive and ineffectiveness of the Syrian troops.

In a closed-door meeting before parliament on Wednesday, Russian Minister of Defense Sergei Shoigu declined to put a time limit on the intervention, but said that Russia “can’t count on a quick conclusion to the operation,” the RIA Novosti state news agency reported.

A day earlier, Putin met with Secretary of State John F. Kerry, where an agreement was struck to hold talks on a political settlement on Friday in New York that may then be formalized in a United Nations resolution.

Putin largely reiterated Russia’s anger over the downing of its warplane by Turkish jets last month.

“Life has shown that it is difficult to us, practically impossible, to come to terms with the incumbent Turkish administration,” Putin said. “Even when and where we say that we agree they stab us in the side or in the back, for absolutely unclear reasons.”

He also did not discount the suggestion that Turkey may have given the order to shoot down the Russian jet with the goal of pleasing the United States.

Putin also addressed Russia’s economy, which has been hit with high inflation and plunged against the dollar and euro as the price of oil has fallen drastically in recent months. While the dollar was worth 35 rubles two years ago, it now trades at more than 70 rubles.

Putin said that he was satisfied with the leadership of Russia’s Central Bank, which steeply hiked interest rates in order to prevent inflation, despite the pain that has dealt to businesses and borrowers. He said that he wanted to lower interest rates, but said that would only happen when Russia could do so “in a natural way.”

In a personal moment, Putin was asked about the identity of his daughters, after a series of investigations in the Russian press revealed a woman named Katerina Tikhonova had attained a prominent position overseeing millions of dollars in investment at a high-tech business incubator at Moscow State University.