26 Qataris including members of ruling family, kidnapped by gunmen in southern Iraq 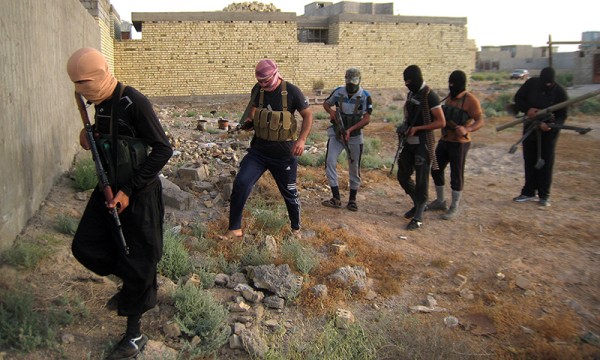 Unidentified gunmen kidnapped 26 members of a Qatari hunting party in southern Iraq . Some of the kidnapped Qataris are reportedly members of the ruling family
Share:

Gunmen kidnapped at least 26 Qatari hunters in southern Iraq, officials said on Wednesday, the second high-profile abduction of foreigners in the country in three months.

Turkey, which like Qatar is at odds with various Iraqi groups over regional issues, had 18 of its citizens abducted in Iraq in early September. They were eventually released unharmed.

Dozens of gunmen “kidnapped 27 Qatari hunters… when they were in a camp near the Bassiyah area,” Faleh al-Zayadi, the governor of Muthanna province where they were seized, told AFP.

“All of those kidnapped are Qatari and a number of members of the ruling family in Qatar are among them,” Zayadi said, adding that the kidnappers used more than 50 vehicles mounted with machineguns.

Two Iraqi officers providing security for the party were also taken but later released, he said.

Other officials put the number of people kidnapped at 26.

“Twenty-six Qatari hunters were kidnapped at about 3:00 am (0000 GMT) by unknown gunmen,” a police major from Muthanna said.

A local council member from the province gave the same number, saying that the kidnappers were in dozens of pick-up trucks.

Qatar’s foreign ministry has contacted the Iraqi government to obtain “details about the kidnapping of the Qatari citizens and to work to release them as quickly as possible”, it said in a statement carried by the official QNA news agency.

Assistant Foreign Minister for Political Affairs, Mohammed al-Rumaihi, has been dispatched to Baghdad to coordinate with Iraqi authorities “to ensure the safety of the Qatari nationals”, it said.

The hunters entered Iraq with an “official permit” from the interior ministry, the Qatari statement said.

Wealthy citizens of Sunni Gulf states venture to countries including Pakistan, Afghanistan and Iraq to hunt with falcons without the bag limits and conservation measures restricting the killing of certain species that they face at home.

There is significant hostility in Iraq, especially in the Shiite-majority south, over the Gulf countries’ policies on the Syrian civil war and perceived complicity in the rise of the Islamic State group.

Qatar, which has financially backed rebels fighting to overthrow Syrian President Bashar al-Assad, is especially reviled on this front.

Iraqi militia groups, which have a major presence in Shiite areas of Iraq including the south, have sent members to Syria to fight alongside Assad’s regime.

The kidnappings come a little over three months after gunmen seized 18 Turks in Baghdad. Turkey, like Qatar, has close ties to Syrian rebel groups and is accused by some of not doing enough to combat IS.

The Turkish workers were later freed unharmed, two of them in the southern province of Basra and the other 16 on the road to Karbala, also south of Baghdad.

Iraqi security forces clashed with fighters from the powerful Ketaeb Hezbollah militia during the search for the kidnapped Turks.

Baghdad turned to mostly Shiite volunteer forces for support as IS advanced towards the capital in June 2014. Those groups have played a key role in halting and then reversing the jihadists’ gains.

In doing so, the government empowered Shiite militias, some with chequered human rights records, and spurred the creation of new ones, allowing them to act with near impunity despite the fact that officially they fall under government command.