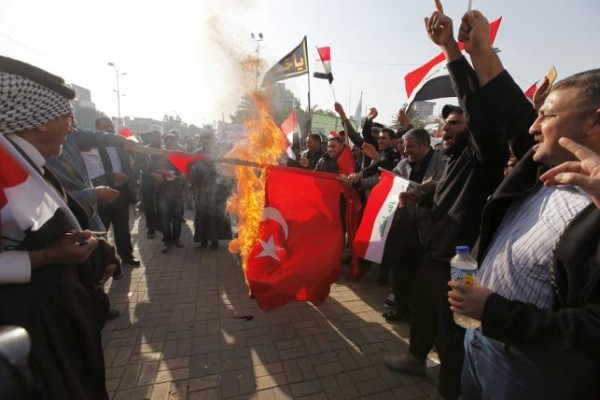 Protesters burn a Turkish national flag during a demonstration against the Turkish military presence in Iraq, at Tahrir Square in central Baghdad, Iraq, December 12, 2015. The rallies were organized and led by Shi’ite militia groups, REUTERS/Ahmed Saad
Share:

Thousands of Iraqis protested on Saturday against Ankara’s deployment of troops to a base near the northern city of Mosul, with some burning Turkish flags and threatening violence against the soldiers for what they see as a violation of sovereignty.

News of the deployment of 150 Turkish soldiers earlier this month triggered a crisis between Ankara and Baghdad, which has appealed to the United Nations Security Council to demand their immediate and unconditional withdrawal.

Ankara has refused, saying the troops were part of an international mission to train and equip Iraqi forces to fight Islamic State, which still controls a large part of the country. Baghdad denies inviting such a force.

As tensions smolder between Moscow and Ankara over Turkey’s downing of a Russian warplane last month, Russia labeled the Turkish deployment an “unlawful incursion”.

At least 4,000 demonstrators gathered in Tahrir Square in central Baghdad on Saturday, and several thousand more in the oil city of Basra in the south, including Shi’ite militia members who held up banners reading “Death to Turkey. Death to Erdogan”.

“We consider any military presence on Iraqi land as foreign aggression which we should stand against using all possible means,” Hadi al-Amiri, a Shi’ite lawmaker who heads the powerful armed Badr Organisation, told protesters in Baghdad.

Cwhich have threatened to use force against Turkey unless it withdraws.

Pointing his pistol towards an image of Erdogan, Amjad Salim, a local commander in the Badr Organisation in Basra, said: “We are on high alert now awaiting orders from our commanders to set fire to the ground beneath the feet of Turkish soldiers.”

In Baghdad, Reuters reporters saw angry protesters trample on the Turkish flag and hit a caricature of Erdogan with slippers in a mark of disrespect.

“If Turkey thinks Iraq is busy with fighting Daesh and it can seize the opportunity to deploy troops then it should think twice before making such a mistake,” said Abu Muntathar al-Moussawi, a local commander in Iranian-backed Asaib Ahl al-Haq paramilitary group.

“We can target Turkish soldiers and coming days will prove it.”