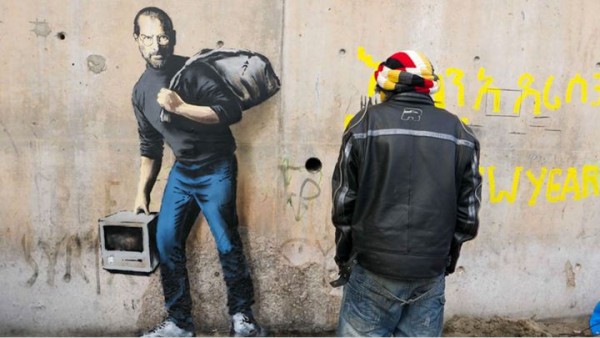 Banksy depicted Steve Jobs as a Syrian refugee in a new series of works created at a French migrant camp banksy.co.uk
Share:

Street artist Banksy has taken on the migrant crisis in a new mural at a migrant camp in France.

The elusive graffiti artist has depicted the late Apple guru Steve Jobs — whose biological father was from Syria — carrying a black garbage bag and an early model of the Macintosh computer.

The artist best known for his subversive street art has never disclosed his identity. His publicist, Jo Brooks, confirmed Saturday that the work found at the encampment in Calais is genuine.

Jobs was adopted. His biographer, Walter Isaacson, has described the computer genius’ biological father, Abdulfattah Jandali, as a graduate student who came from a prominent family in Syria and studied in the United States.

Banksy has traveled the world to comment on war, child poverty and the environment.