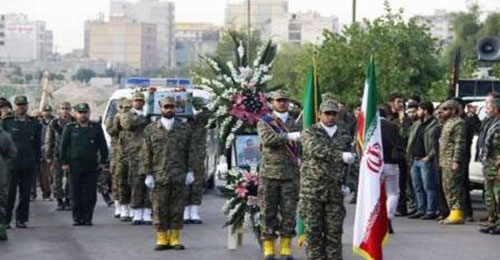 Funeral of Iranian Revolutionary Guard officer Syed Mujtaba Abu Al Qassimi who was killed by mistake by a Russian airstrike in Syria. He is from the Basij militia and was buried in Dezful on Saturday Dec 12,2015
Share:

Iranian opposition media reported that four Iranian revolutionary guards were killed in Syria by a Russian airstrike “by mistake”.

“The dead 4 Iranians were identified as Syed Asghar Garghandi, officer Ihsan Fathi ( both belong to the Hasan al-Mujtaba” brigade of the Iranian guards) , plus police officer Syed Mujtaba Abu Al Qassimi, a Basij militia leader who hails from the city of Dezful, who was buried Saturday in Dezful in the presence of several Iranian officials . The fourth is an officer from Ramhermez, but his name was not made public .

According to the report about 70 Iranians have been killed in Syria during the past week.

The Russians reportedly blamed the mistake on the Syrian army which reportedly gave the Russians the wrong information about the position of the Iranians.