Iran recruits Pakistani Shiites to fight the Sunnis in Syria 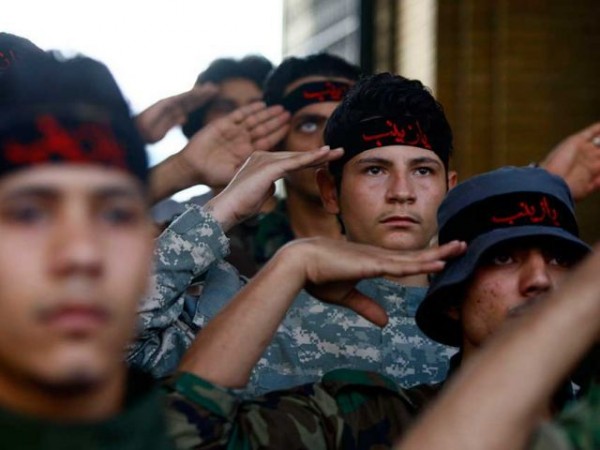 For years, websites linked to Iran’s Revolutionary Guard have posted articles eulogizing Shiite fighters who die in Syria. But two men heralded last month for dying to defend a shrine near Damascus were different from most martyrs given such treatment in the past: they were Pakistanis.

The men were part of the Zeinabiyoun, a unit of Pakistani fighters named for a granddaughter of the Prophet Mohammad (pbuh) buried in the shrine, the latest contingent in an Iranian drive to recruit Shiites from the region to fight in Syria.

The increase in the number of “martyrdom” notices of fighters from the group this year indicates they are taking a more active role in the conflict. A posting in mid-November on a Twitter account bearing the group’s name displayed the pictures of 53 men, described as fighters killed in battle.

While there has been no official announcement of their total numbers, a regional source familiar with the issue said there were hundreds of Pakistanis fighting in Syria, many stationed around the shrine of Prophet Mohammad’s (pbuh) granddaughter Zainab.

Iran’s recruitment of the Pakistani fighters adds yet another international dimension to Syria’s 4-year-old civil war, which has deepened sectarian divisions across the Muslim world and drawn in most regional and global powers.

Shiites  in Pakistan are helping to defend the government of Tehran’s ally, President Bashar al-Assad, who is also supported by Russian air strikes and fighters from Lebanon’s Hezbollah militia, against an array of Sunni rebels backed by Turkey and Arab states. The United States, Turkey, Arab and European powers are also participating in a coalition bombing Islamic State.

A Facebook page bearing the name of the Zeinabiyoun showed pictures of what was described as a funeral in Iran in late November, with members of Iran’s Revolutionary Guard standing next to men in shalwar kameez, the traditional dress worn in Pakistan.

“The Zeinabiyoun are a Pakistani Shiites’ outfit that’s run by the IRGC,” said Phillip Smyth, a researcher at the University of Maryland and adjunct fellow at the Washington Institute for Near East Policy who has done extensive research on Shiite groups fighting in Syria, using an acronym to refer to Iran’s Islamic Revolutionary Guard Corps.

“There is a large pool to draw from,” said Alex Vatanka, a senior fellow at the Middle East Institute in Washington and the author of a book on relations between Pakistan and Iran.

“There are pockets within that Shiite community that have been willing to pick up arms to fight for their Shiite identity, their sectarian identity. And that’s what the IRGC is tapping into.”

They are only the latest Shiites recruited by Iran to fight in Syria, after Hezbollah fighters from Lebanon, members of Iraq’s Shiite majority and members of Afghanistan’s ethnic Hazara Shiite  minority. All have been deployed to support Assad, whose own Alawite sect is an offshoot of Shiite Islam.

Videos and pictures posted on social media sites say Zeinabiyoun fighters have been active around Aleppo as well as at the shrine near Damascus in the last month.

Based on material posted online, the Zeinabiyoun could have up to 1,000 fighters, estimated Smyth.

Attempts to get comment from a public relations news office of the Revolutionary Guard were unsuccessful.

The Zeinabiyoun have drawn on the symbols of their fellow Shiite fighters to brand themselves: their logo, a fist holding a machine gun set in green and yellow, is an almost identical copy of that of Lebanon’s Hezbollah. They are occasionally referred to as Hezbollah Pakistan online.

The group is open about its affiliations: its Facebook pages praise Iranian Supreme Leader Ayatollah Ali Khamenei and talk about a sense of duty to defend the Sayyida Zeinab shrine.

A Zeinabiyoun image posted on Instagram shows the crosshairs of a gun on the back of a man with the slogan “I will kill any takfiri Wahhabis I can find,” in Farsi. Wahhabism is a strict form of radical Islam and the state sect of Iran’s main rival in the region, Saudi Arabia. Takfiris are hardliners who brand other Muslims heretics.

“The message Iran is recruiting with, like it or not, is a sectarian message,” said Vatanka. “That is a message that is inherently dangerous and can get out of hand.”

According to the group’s postings on the internet, some of the Pakistanis fighting in Syria were already residing in Iran, while others come from a community of Pashtun Shiites in the town of Parachinar in the tribal areas.

The Zeinbayioun started out as part of a unit of Afghan fighters called the Fatemiyoun, Smyth said. The Fatemiyoun have taken heavy losses in Syria and there are regular postings about their casualties on hardline Iranian sites.

At least some of the Afghan fighters have been lured to fight through promises of Iranian citizenship or steady monthly income. Advertisements aimed at Pakistanis online suggest similar inducements.

One recruitment ad posted on Facebook last week said any physically fit man between 18 and 35 should apply to fight in Syria. It offered 45 days of initial military training along with six months of further training in Syria, a salary of Rs120,000 per month and 15 days of holiday every three months.

If the recruit is killed in action, his children’s education will be paid for and the family will be given pilgrimage trips to Iran, Iraq and Syria every year. Any willing recruits should make their way to Iran’s holy city of Qom, the ad said. A phone number was provided. There was no answer when Reuters rang.

“It’s clear that they (Afghan and Pakistani recruits) had to accept that role from the Iraqi Shiites who were pulled out,” Smyth said.

Vatanka described the mission as an “ideological project” for the Revolutionary Guard, promoting Shiite solidarity in other countries in the region.

“Given the limitations of how much it can recruit at home, the Revolutionary Guard needs to shore up support in like-minded communities, which they have been pretty good at in the course of the Islamic Republic’s history.”