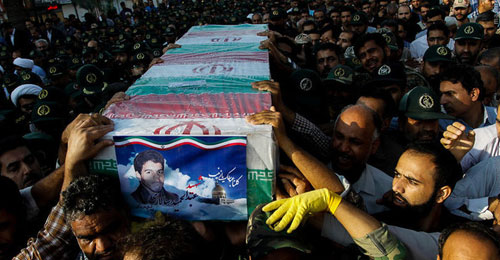 Funeral of Iran Revolutionary Guard commanders ( in Isfahan , Iran ) that were killed this week in Syria, according to Iranian media reports. U.S. officials are reportedly seeing significant numbers of Iranian Revolutionary Guard Corps troops retreat from the Syrian combat zone in recent weeks, following the deaths and wounding of some of top officers in a campaign to retake Idlib Province and other areas lost this year to opposition force
Share:
By:Eli Lake

Iran is beginning to withdraw its elite fighters from the Russian-led military campaign in Syria, according to U.S. and other Western military officials, suggesting a fissure in what President Barack Obama derided last month as a “coalition of two.”

U.S. officials tell me they are seeing significant numbers of Iranian Revolutionary Guard Corps troops retreat from the Syrian combat zone in recent weeks, following the deaths and wounding of some of top officers in a campaign to retake Idlib Province and other areas lost this year to opposition forces supported by the West and Gulf Arab States. As a result, the Russian-initiated offensive that was launched in September seems to be losing an important ally.

On Friday at the Saban Forum at the Brookings Institution, Israeli Defense Minister Moshe Ya’alon said that Russia’s initial plan was to take back Idlib and other cities that had fallen under rebel control within three months. “It’s not going to happen because of the military difficulties,” he said, adding that the campaign to date looked to be a “failure.” He cited the “incompetence” of Syria’s army as well as “the lack of determination of the Iranian Revolutionary Guard Corps.”

This is a surprising turn of events. A number of Western media outlets reported this fall that Qassem Suleimani, the leader of Iran’s elite Quds Force, and Russia’s defense ministry had negotiated an infusion of Iranian forces into Syria over the summer, shortly after the conclusion of the nuclear negotiations between Iran and six other world powers. That surge was supposed to change the tide of the Syrian war that the dictator Bashar al-Assad was losing, as more of his territory fell to a coalition of rebels supported by the U.S., Saudi Arabia, Qatar and others.

In October, the Wall Street Journal reported on experts’ assessments there more than 7,000 Iranian Revolutionary Guard Corps members and other militia volunteers were aiding the Syrian regime. In late October, General Joseph Dunford, the chairman of the Joint Chiefs of Staff, testified there were 2,000 Iranian troops in Syria leading the fight to save Assad.

Today that number has dwindled, according to U.S. and other Western officials. One estimate shared with me by a senior Western defense official said there were only 700 Iranian Revolutionary Guard Corps members now fighting in the Russian-led offensive. (That estimate does not include Iranian military advisers who have embedded with the Syrian armed forces since 2012.)

One reason Iran is now withdrawing from Syria, according to U.S. officials, is that many officers have been killed or wounded in the heavy fighting this fall. The U.S. intelligence community is still trying to verify reports that Suleimani himself was injured in late November in Aleppo, Syria’s largest city.

Robert Ford, who served as U.S. ambassador to Syria between 2011 and 2014, told me reports from the region suggest that guard corps members are in the very thick of the warfare. “They are losing lieutenants,” he said. “When you lose lieutenants it means you are losing people fighting on the front lines.” Iran has started acknowledging some of those losses in its official press.

Ford said the fierce combat the Iranians and Russians have encountered is an indication that the Western and Gulf Arab support for the Syrian opposition may be having a significant effect.

The question for U.S. policy makers is what an Iranian withdrawal will mean for Russia’s campaign. Both countries remain steadfast that Assad should remain in power for the foreseeable future. Russia’s president, Vladimir Putin, even mused this week about using nuclear weapons against the Islamic State, which has declared a caliphate in territory it has conquered in eastern Syria and western Iraq.

Meanwhile, some press reports say Russia is planning to open a second air base near Homs in central Syria, in addition to the facility at Latakia on the Mediterranean coast, suggesting that Moscow has decided to escalate the air war. (The media site Russia Today contradicted those reports.) In the last week, U.S. officials say they have seen an increase in the Russian air campaign in Aleppo.

Nonetheless, some U.S. policy makers stress that the Kremlin cannot continue its air campaign indefinitely. Deputy Secretary of State Antony Blinken made this point last week at a forum hosted by Foreign Policy Magazine, saying that while Russia’s military intervention in Syria increased its leverage over Assad, it also “increased the conflict’s leverage over Russia. Russia cannot afford to do what it’s doing in Syria for a long period of time.”

The conflict has also increased its leverage over Iran. “If the Iranians feel over the long term they need a deal, if the cost of maintaining the Assad government is too great for them, then these developments are a positive,” Ford, who is now a scholar at the Middle East Institute, told me. “If they feel the costs of the battle can be sustained for months, if not years, they may be able to pay that price. They put a high value on maintaining the Assad government as it is now.”

Since 2011, when the Syrian people began the uprising against Assad, Iran and Russia have been willing to pay that increasing price to keep their client in power. And yet even with a new Russian air campaign and an infusion of Iranian fighters, Assad has been unable to take back his country. The Obama administration now hopes the withdrawal of Iranian forces is an indication that at least one of Assad’s benefactors may decide to cut its losses.