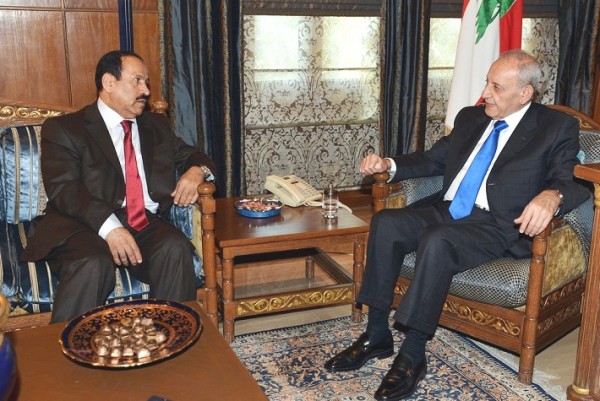 The invitation comes at a time of intense consultations among Lebanese officials to resolve the vacuum in the presidency .

In his weekly meeting with a number of lawmakers Wednesday, Berri was quoted as saying on Tuesday that “the best case-scenario is for an agreement between General Michel Aoun and Marada chief Suleiman Franjieh to take place.”

For over 18 months, Christian parties have failed to reach a compromise over a presidential candidate to succeed former President Michel Suleiman who left office in May 2014.

A political settlement that calls for nominating Franjieh for president was reportedly proposed by former Prime Minister Saad Hariri and endorsed by both Speaker Berri and Progressive Socialist Party leader Walid Jumblatt.

Hariri’s Christian allies within the March 14 alliance have voiced reservations over Franjieh’s nomination, casting further doubts over the likelihood of his election without Aoun or Hezbollah’s clear support.

Aoun and Franjieh met Wednesday but no signs of any breakthrough over the presidential deadlock emerged out of their meeting , suggesting the Marada chief was unsuccessful in rallying his March 8 ally behind his presidential bid.

Hariri’s move received the blessing of Asiri on December 3 after he held talks with Phalange Party chief MP Sami Gemayel.

The ambassador said however that the kingdom does not interfere in Lebanon’s internal affairs, but “supports any candidate who enjoys the backing of the Lebanese people, especially the Christians.”