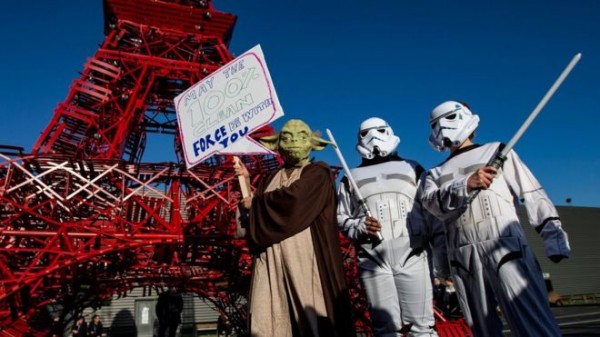 Protesters have been raising climate change awareness at the COP21 climate conference
Share:

By: Matt McGrath
The latest draft version of a potential world changing agreement represents a substantial improvement on previous versions.

It’s much shorter, with the key text of the actual agreement running to just 14 pages – the number of square brackets, indicating areas of disagreement, has reduced significantly to around 300 from more than 900.

But the deal is far from done. Here’s my guide to the five key questions that still need to be answered if the Paris deal is to live up to the hype.

What’s it all about?

You would think that this late in the game, people would have a clear idea about the purpose of the agreement. Alas not quite. There is still a significant question over whether the deal will look to limit warming to 1.5 degrees or 2 degrees C.

It mightn’t seem like much of a difference but it’s hugely important for island states and very vulnerable countries. For several years the idea of having 1.5 in the text was seen as just a platitude to these nations. But when the national plans for climate action, submitted by more than 180 countries were submitted, they added up to warming of around 2.7 degrees.

This has prompted negotiators here to re-visit the idea of 1.5 and it has gathered some political momentum. But expect the final text to “accommodate” the idea, rather than commit people to achieving it. If it was the goal of a legally binding treaty and temperatures went above this level, small island states might seek redress through the courts.

How do we get there?

Whether the target is 1.5 or 2 degrees, the world’s use of fossil fuels will need to be reduced. In the text right now, the undecided question is how much of a reduction and by what date.

One option asks for specific amounts of carbon cuts (70-95% of 2010 levels by 2050) or alternatively, a “long term global low emissions [transformation toward [climate neutrality][decarbonisation]. The square brackets mean the words are not agreed.

Some scientists say that more effort and more clarity are needed.

“The mention of the necessity to achieve net zero carbon is great as that’s essential to limit the warming at any level,” said Prof Corinne Le Quere from the University of East Anglia.

“Still it is only an optional text at this point, and could be replaced by a far more nebulous ‘climate neutrality’.

COP President Laurent Fabius highlighted the lack of progress on finance – and everyone knows that this is one of the most intractable issues.

In the current text it takes up more than one page of the 14-page agreement. While rich nations have promised $100bn a year from 2020 and are on course to meet that target, the issue is actually much broader.

Developing countries want more money from 2020 and they want more of it in the form of grants rather than loans. But there are other key questions, such as what that money should be spent on (should more of it go on helping countries to adapt or helping them to greener energy sources?) and how the money will be tracked and measured.

Observers believe that getting the money right will unlock the door to the deal.

“Countries are looking for that fuel in the system, the finance and investment to achieve their ambitions,” said David Waskow from the World Resources Institute.

“Finance is one of the key spurs to having an upward cycle in the negotiation dynamic that will help unlock a high ambition deal.”

Can I trust you?

If money is a key, then what’s termed transparency in these talks is one of the locks. Transparency means a method of measuring, reporting and verifying that countries are doing what they commit to do. Right now there are quite a few options and the text almost runs to two pages.

Related to the issue of transparency is a global stock take and review of what countries are doing. In the text right now this is pencilled in for 2023/4 and every five years after that.

The outcome of the stock take shall inform and guide the future carbon cutting plans of the parties. Many countries feel that this is both too late and too lax.

Can I go home now?

It may seem trite but this is one of the most crucial questions. Many of the 40,000 plus people involved here have been following the process for decades. After so many false dawns and the desperate disappointment of Copenhagen in 2009, there is tremendous war weariness and an almost pathological desire to get to the finish line.

This desire for an end has combined well with a strict approach to time adopted by the French as well as significant political pressure for a deal from a whole host of political leaders. The hosts seem determined to get it all done by close of play on Friday. So far it seems to be working.

COP21- the 21st yearly session of the Conference of the Parties