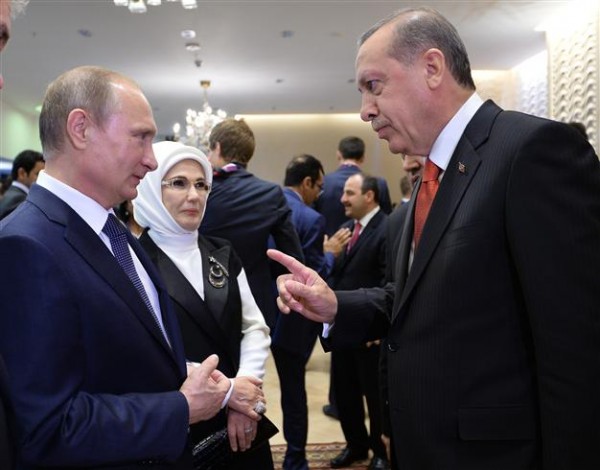 The IS oil business is, however, virtually irrelevant on the global market. Saudi Arabia, for example, brings in more in oil revenues in one day than IS makes in an entire year, using even the highest estimates of IS’s oil capacity. In spite of that fact, the charge of “making money off Jihadi oil” is quickly becoming a geopolitical bludgeon.

On Wednesday, Russian military officials held a press conference where they claimed to be in possession of “hard evidence” that Turkey was complicit in funding the group through oil purchases. “We presented evidence how the illegal oil trade is carried out to finance the terrorist groups,” Russian Deputy Defense Minister Anatoly Antonov said. “The highest political leadership of the country — President Erdogan and his family — are involved in this criminal business.”

Not to be outdone, Turkish President Recip Tayyip Erdogan shot back on the same day. “No one has the right to slander Turkey,” he said. “Turkey has not lost its moral values to buy oil from a terror organization.” If those Russian accusations could be proven, he said, he would resign from office.

And then, on Thursday, Erdogan leveled some accusations of his own. “Who buys oil from Daesh? Let me say it: George Haswani, holder of a Russian passport and a Syrian national, is one of the biggest merchants in this business,” he said, using the Arabic term for the Islamic State.

It’s true that the US. Treasury Department announced sanctions against George Haswani last week, calling him “a Syrian businessman who serves as a middleman for oil purchases by the Syrian regime from ISIL.” (That’s yet another name for IS.) But the US government offered no evidence linking Russia to the money trail.

The accusations are of course about much more than who buys oil from whom. Last week Turkey shot down a Russian jet that it said crossed over into its airspace. That jet was part of a Russian force sent to Syria at the end of September to prop up President Bashar al-Assad. Turkey funnels support to many of the rebel groups bent on Assad’s ouster.

The obsession with oil, however, overlooks some basic facts about the Islamic State’s fossil fuel portfolio, and how it factors into the group’s overall financing.

The group’s oil assets are incredibly small by any international standards. IS is in control of some modestly productive fields in the Deir Ezzor province, that, according to David Butter, a Middle East energy expert at Chatham House, peaked in the 1990s.

The Islamic State has neither the refining capacity, technical know-how, or capital to bring those modest fields up to full production. In fact, the fields are operating, at most, at half their capacity, Butter said. IS then sells that oil at the wellhead itself, for a bargain price. “I wouldn’t be surprised if they are selling at $5 or $10 a barrel,” Butter said in October. On the international market, oil goes for around $40-50 a barrel.

The most optimistic estimations of IS oil revenue are around $500 million annually, about one-quarter-of one percent of the yearly revenue of Chevron.

Since the US and France started bombing IS oil assets in earnest after last month’s Paris attacks, those fields around Deir Ezzor are producing less and less crude. At the same time, IS is having to throw down more money to keep the pumps flowing. The New York Times reported on Tuesday that IS is raising salaries for oil engineers, as many of the skilled technicians flee its territory.

What’s more, IS gets most of its cash from seizing the assets of civilians under its control, a practice that Russia and Turkey have no hand in.

So is there any truth to the charge that Russia and/or Turkey are producing the demand for the Islamic State’s oil? Aymenn al-Tamimi, a fellow at the UK Middle East Forum who has studied the only budget document to leak out of the Islamic State, is adamant that obsession with oil revenues is misplaced. The traders who buy oil at the wellheads, he said, are not members of the Islamic State, they are smugglers who peddle small quantities of oil and keep the local economy alive. “I believe the assumption that all aspects of the oil industry are affiliated with IS is mistaken,” he said.

According to al-Tamimi, the $500 million number vastly overstates the IS oil capacity, because it relies on oil prices of around $20 a barrel. “II have seen receipts with prices lower than that,” he said.

That’s not to say that both Turkey and Russia don’t bear some responsibility for the success of IS.

Russia’s spent the last six weeks bombing many of IS’s most potent enemies, including the not-so-savory Al Qaeda affiliate the Nusra Front, and US-backed Free Syrian Army forces. For its part, Turkey is waging a bombing campaign against the Kurds, whose fighting forces are the only ones that have proven capable of beating IS on the ground. Taken in that light, the oil-buying accusations on both sides are more likely a lame diversionary tactic, aimed at distracting from both countries’ complicity in the Islamic State’s vexing durability.