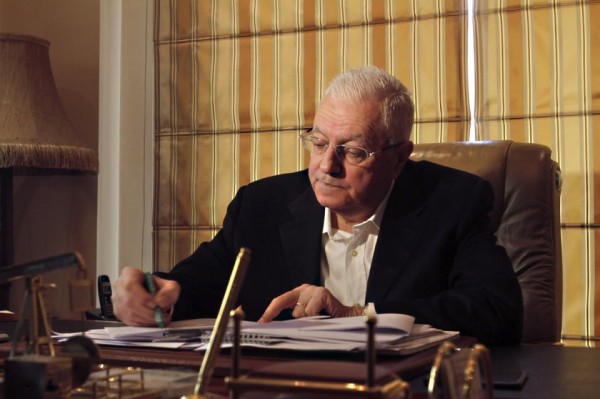 Syrian- Russian businessman George Haswani. US Treasury imposed sanctions on Haswani, who was also placed on an European Union sanctions list, for serving as a middleman for oil purchases by the Syrian regime from theIslamic State ( Daesh)
Share:

President Recep Tayyip Erdoğan on Thursday said Turkey had proof that Russia was involved in illegal oil trade with the terrorist organization Daesh in Syria, countering Russian allegations that Ankara was importing oil from the terrorists.

The Russian defense ministry on Wednesday accused Erdoğan and his family of involvement in the illegal oil trade with Daesh after Ankara’s downing of one of Moscow’s warplanes last month which plunged the two countries’ relations into a crisis.

“In recent days a fashion led by Russia has emerged. Actually, Russia does not believe this either,” said Erdoğan, referring to the alleged oil trade with Daesh.

“Look, Russia has to prove that the Turkish republic buys oil from Daesh, otherwise this is a slander,” he said, while repeating that he would resign if Russia was able to prove their claim.

“Who buys oil from Daesh? Let me say it. George Haswani, holder of a Russian passport and a Syrian national, is one of the biggest merchants in this business,” Erdoğan said.

In November, the US Treasury imposed sanctions on Haswani, who was also placed on an European Union sanctions list, for serving as a middleman for oil purchases by the Syrian regime from the Daesh group.

Erdoğan said Thursday “a famous Russian chess player” was also involved in the oil business with Daesh, without giving a name. “He’s also in this race,” he said.

The new US sanctions also apply to Kirsan Ilyumzhinov, a wealthy Russian businessman and long-standing president of the World Chess Federation (FIDE) who was formerly president of the southern Russian region of Kalmykia.

Josh Earnest, the assistant to the president and press secretary in the White House has also dismissed claims and blamed Assad for exploiting Daesh oil.

The Russian defense ministry officials showed the journalists yesterday what they said were satellite images depicting thousands of trucks carrying oil from IS-occupied areas in Syria and Iraq into Turkey. They did not, however, provide any evidence to back up the claims of personal involvement of Erdogan and his family in the illegal oil trade.

According to a 2014 report by Lebanese NOW website George Haswani is a Greek Catholic businessman from the town of Yabroud, near the Syrian border with Lebanon. Haswani “was able to forge a relationship with the group that led to an understanding to transport crude from the fields it took over to ( Syrian ) regime areas, in return for financial and cash transfers, which he himself handled.”

Haswani’s name surfaced in late 2013/early 2014 in another mediatory role, namely the negotiation over the release of nuns then held by Jabhat al-Nusra in Yabroud. Reports at the time described Haswani as a businessman with “close ties to the Assad regime,” and “strong ties” to Assad personally.

The report adds that a Syrian rebel commander told NPR’s Deborah Amos in 2013 that Haswani “runs an oil and gas construction business with ties to Moscow.” In March, the Syrian pro-opposition website All4Syria provided more data on Haswani’s business and ties to Russia; information it said it obtained from someone who worked with him. Haswani was deputy general manager of the Banias refinery. He had studied in Russia, where he married his first wife. While in Russia, Haswani made contacts, “some of whom,” according to the website’s source, “had gone on to assume high-ranking positions in the Russian security establishment.” As a result, Haswani’s firm, HESCO Co., “secured contracts with Russian oil and gas firms, as well as in importing spare parts for Russian military vehicles and oil wells.” Haswani’s son-in-law, Yousef Arbash, runs his Moscow office. There, All4Syria’s report added, he works closely with Amjad Douba, nephew of former Military Intelligence chief Ali Douba, who has long been established in Moscow.

The report adds that HESCO is the subcontractor for Russian company Stroytransgaz. In an interview in June of 2013 , Arbash explained that HESCO has been “strategic partners” with the Russian firm, working on joint projects in Sudan, Algeria, the UAE and Iraq. Back then, HESCO had started working with Stroytransgaz to build a gas processing plant in Palmyra ( Syria) , which is supposed to have been completed in the second half of 2014. The Russian company also signed a deal with the Syrian regime in June of 2014 for the first phase of an irrigation project for northeast Syria. The deal, valued at SYP30 billion ($194 million), is for the construction of a main pumping station in the Ain Diwar area, near the Turkish and Iraqi borders, to draw water from the Tigris River. Haswani was present at the signing, and confirmed moving forward with the Russian company as its subcontractor “on vital projects in Syria despite difficulties in implementation.”

The report adds that All4Syria claimed that Haswani’s second marriage was to an Alawite woman from Lattakia “connected to the Assad family.” This could further explain his privileged status and closeness to the ruling family, as well as Assad’s confidence in him as a middleman.