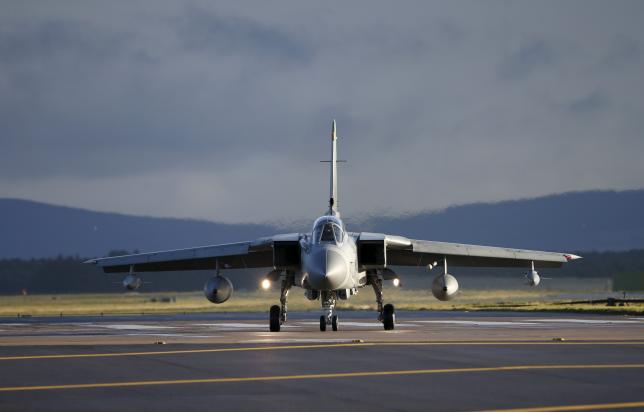 Britain’s parliament voted on Wednesday to launch bombing raids against Islamic State in Syria, supporting Prime Minister David Cameron’s case that the country needs to help destroy militants who are “plotting to kill us”.

After more than 10 hours of tense debate, lawmakers voted in favor of air strikes, by 397 to 223. Hours after the vote, four British fighter jets took off from the RAF Akrotiri airbase in Cyprus, a Reuters witness said. The destination of the jets was not immediately clear and there was no comment from British authorities.

The victory hands Cameron the chance to restore Britain’s standing in global affairs. He had urged lawmakers not to turn their back on allies such as France in their time of need.

“Britain is safer tonight because of the decision that the House of Commons has taken,” Foreign Minister Philip Hammond told Sky News.

Many British voters are wary of being dragged into another war in the Middle East. Some view Western intervention in Iraq and Libya as a failure that sowed chaos across the region. News of the vote was met by howls of disgust by dozens of anti-war protesters demonstrating outside parliament.

But the Nov. 13 attacks on Paris that killed 130 people and were claimed by Islamic State have stiffened the resolve of some lawmakers and divided the opposition Labour Party, which convinced Cameron he could win the support of parliament for extending air strikes beyond Iraq.

Cameron said the more than four-year Syrian civil war could not be resolved by military action alone, but that the strikes would “degrade” Islamic State militants – which he said should be called Daesh.

Daesh is the pejorative word used by opponents or people who do not support Islamic State to refer to the jihadist group.

“These terrorists are plotting to kill us and to radicalize our children right now. They attack us because of who we are, not because of what we do,” Cameron told a packed House of Commons, where many lawmakers sat on steps or stayed standing.

“The question is this: Do we work with our allies to degrade and destroy this threat, and do we go after these terrorists in their heartlands, from where they are plotting to kill British people, or do we sit back and wait for them to attack us?”

“Since the beginning of the counter-ISIL campaign the United Kingdom has been one of our most valued partners in fighting ISIL,” Obama said in a statement, referring to Islamic State by an acronym.

“We look forward to having British forces flying with the Coalition over Syria, and will work to integrate them into our Coalition Air Tasking Orders as quickly as possible,” Obama said.

Germany’s parliament is expected to vote on Friday in favor of joining the campaign against Islamic State, although only to provide military support for air strikes, not actually to take part in them.

British air strikes are unlikely to change the military balance, given the United States is already involved, but the vote handed Cameron the chance to show Britain’s willingness to add to a Western consensus for taking the battle to militants in Syria.

France and the United States are already bombing Islamist militants in Syria, while Russia has bombed mainly other rebels, according to conflict monitors and Western officials, in an intervention launched on Sept. 30 to bolster its ally, Syrian President Bashar al-Assad. The West says Assad must go.

The vote also boosts Cameron after he suffered a humiliating 2013 parliamentary defeat over plans to bomb Assad’s forces.

But it is a blow to the leader of Britain’s main opposition Labour Party, Jeremy Corbyn, who was against launching the air strikes.

Corbyn, a veteran anti-war campaigner who argued the bombing would be ineffective and kill civilians, was forced to allow his lawmakers to vote according to their conscience in order to quell a rebellion in his party over the military action.

Corbyn had hoped media reports that Cameron told Conservative lawmakers at a meeting late on Tuesday not to vote with the Labour leader “and a bunch of terrorist sympathizers” would harden opposition to the action.

But many in his party voted with the prime minister, a move which may bring into question Corbyn’s leadership.

The British public is divided over launching the strikes, with a YouGov opinion poll showing voter support for action in Syria had fallen to the lowest level since September 2014, with 48 percent of respondents supporting strikes and 31 percent against.

Those opposed to air strikes recalled the events of 2003 when Britain helped the United States to invade Iraq after asserting – wrongly, as it later turned out – that Saddam Hussein possessed weapons of mass destruction.

Julian Lewis, Conservative chairman of the Commons Defense Committee and a critic of extending air strikes to Syria, said the government was in denial about the effectiveness of bombing without deploying viable ground troops.

Lewis compared Cameron’s assertion that there are as many as 70,000 moderate opposition fighters in Syria with the “dodgy dossier” on Iraq’s military capabilities.

“Instead of dodgy dossiers, we now have bogus battalions of moderate fighters,” he said.