Turkey preparing to hand over remains of pilot to Russia: PM 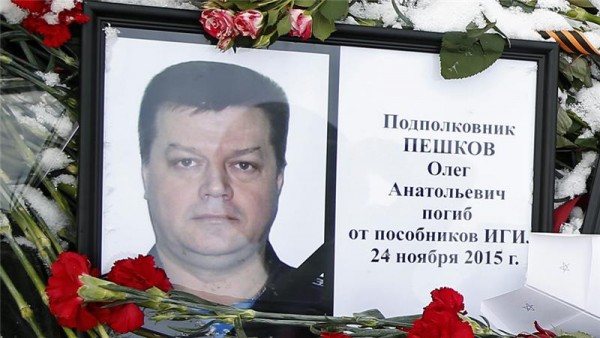 The body of Russian pilot Lieutenant Colonel Oleg Peshkov will be repatriated on Sunday [AP]
Share:
The body of the pilot killed when Turkey shot down a Russian jet was taken to Turkey late on Saturday to be handed over to Russia, Prime Minister Ahmet Davutoglu said.

The body is being treated in accordance with the Orthodox tradition, Davutoglu said in a news conference in Ankara on Sunday before going to Brussels for a meeting with EU leaders on migration.

He did not say how the body was delivered to Hatay in southern Turkey but said Russia’s military attache was going there on Sunday as part of procedures to recover the remains.

Relations between Turkey and Russia have sharply deteriorated since Tuesday’s incident, with Russia imposing economic sanctions and revoking a visa-free agreement, while Turkey has sought to cool tensions, seeing the Paris climate change talks that start this week as a chance to mend ties.

Davutoglu said that with different coalitions operating in Syria with differing objectives, similar incidents to that of the downing of the Russian jet could happen unless there was information sharing and coordination.

Both United States along with other allies, including Turkey, as well as Russia are carrying out air campaigns against Islamic State and other groups.

Russia and Turkey have accused each other of aiding Islamic State, but both say they are battling the militants who have taken swathes of land in Iraq and Syria.

However, Russia sides with Syrian President Bashar al-Assad, and has been accused by the West of using its bombing campaign to help him instead of targeting Islamic State.

Turkey meanwhile wants Assad gone and has been supporting rebels fighting him.