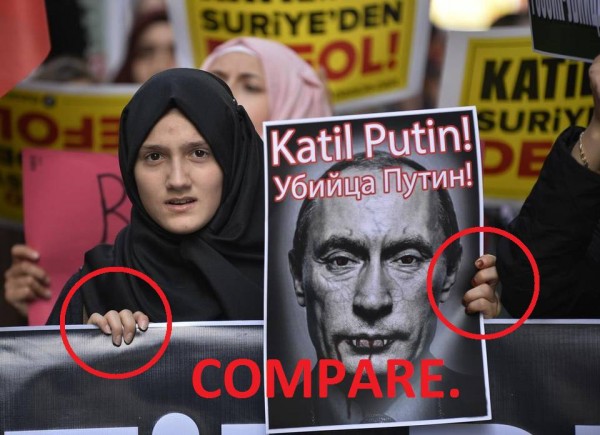 Protesters shout slogans and hold a poster depicting Russian President Vladimir Putin and reading “Putin, murderer !” during a demonstration in Istanbul against Russia on November 27, 2015
Share:
Russia said on Friday it would suspend its visa-free regime with Turkey from January, as leaders from the two countries traded tit-for-tat accusations over Ankara’s downing of a Russian bomber.

“A decision has been made to halt the visa-free regime with Turkey,” Foreign Minister Sergei Lavrov told reporters after talks with Syrian counterpart Walid Muallem. “This decision will enter into force from January 1, 2016.”

“We have more and more questions about the activity of Ankara and its real commitment to eradicating terrorism,” Lavrov told a news conference.

“We don’t want these relations to suffer harm in any way…” Erdogan told supporters during a speech in Bayburt, in northeast Turkey, before adding “Russia is obliged to prove its allegations, otherwise it will be considered a liar because of those grave and unfair accusations targeting Turkey”.

Turkey says the Russian plane strayed into its airspace and ignored repeated warnings but Russia insisted it did not cross the border and accused Ankara of a “planned provocation.”

Erdogan said that he wanted to meet his Russian counterpart, Vladimir Putin, on the sidelines of the climate summit in Paris.

“I would like to meet him face to face on Monday”, the Turkish president said.

Putin has so far refused to contact Erdogan because Ankara does not want to apologise for the downing of the jet, Putin aide Yuri Ushakov said on Friday.

Russia’s lower house speaker, Sergei Naryshkin, said on Friday that Moscow had the right to make a military response, calling the incident an “intentional murder of our soldiers”.

Relations between the former Cold War antagonists are at their worst in recent memory after Turkey shot down the jet near the Syrian border on Monday. Russia has already threatened economic retaliation against Ankara, which Erdogan has dismissed as “emotional” and “unfitting”.