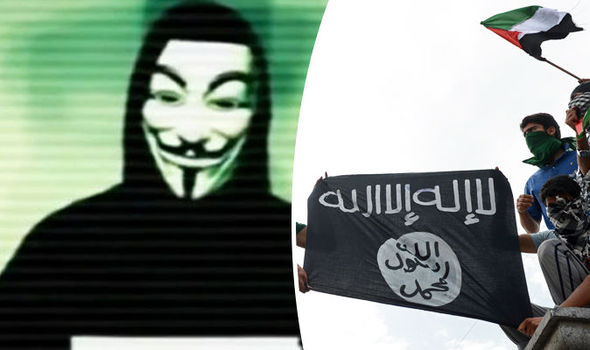 The panicked terror group has withdrawn one of its main websites onto the dark web, in a desperate bid to save it from a “revenge” attack after their horrific attack on Paris , according to a cyber-security expert.

Scott Terban said supporters of the destructive jhadi extremists are sharing the new web page’s address, which can only be accessed with special software.

Anonymous, the fearless cyber activist group, threatened to wipe ISIS off the internet in the wake of the French capital’s night of horror.

The hacking group has published details of at least 5 men it believes are ISIS-linked recruiters and has closed down 5,500 Twitter accounts.

The group has also claimed to have identified a ‘high-ranking’ recruiter living in Europe. But as of yet have not published details of his identity.

But this will be much more difficult if the depraved terror group moves to the relatively safe confines of the dark web.

Writing on his blog, Terban said: “Given that this site has popped up today in the dark net just after the attacks in Paris, one has to assume that an all out media blitz is spinning up to capitalise on the situation.

The cyber whizz said the fact ISIS has a “real site in the dark net” is “problematic” because all of its videos and files will be stored there.

He added: ”This means that trying to intercept them or tamper with the supply chain is going to be much more [difficult].”

A spokesperson for the group said after the Paris attacks: “Anonymous from all over the world will hunt you down.

“You should know that we will find you and we will not let you go.

“We will launch the biggest operation ever against you.”

After the Charlie Hebdo attacks in January, Anonymous started publishing a list of Twitter accounts it says are spreading Islamic State propaganda.

At least five men who the group claims are ISIS recruiters had their details leaked, while the hackers also took down around 5,500 Twitter accounts.