Syrian refugees not welcome here, governors of 24 US states say 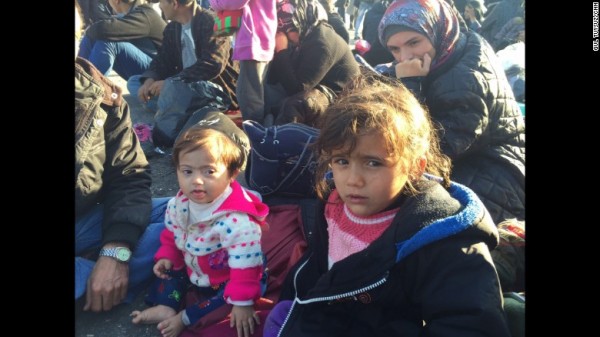 The governors of at least 24 states have announced they will not accept Syrian refugees. The states range from Alabama and Georgia, to Texas and Arizona, to Michigan and Illinois, to Maine and New Hampshire. Among these 24 states, all but one have Republican governors.

The announcements came after authorities revealed that at least one of the suspects believed to be involved in the Paris terrorist attacks entered Europe among the current wave of Syrian refugees. He had falsely identified himself as a Syrian named Ahmad al Muhammad and was allowed to enter Greece in early October.

Some leaders say they either oppose taking in any Syrian refugees being relocated as part of a national program or asked that they be particularly scrutinized as potential security threats.

Only 1,500 Syrian refugees have been accepted into the United States since 2011, but the Obama administration announced in September that 10,000 Syrians will be allowed entry next year.

The Council on American-Islamic Relations said Monday, “Defeating ISIS involves projecting American ideals to the world. Governors who reject those fleeing war and persecution abandon our ideals and instead project our fears to the world.”

Authority over admitting refugees to the country, though, rests with the federal government — not with the states — though individual states can make the acceptance process much more difficult, experts said.

American University law professor Stephen I. Vladeck put it this way: “Legally, states have no authority to do anything because the question of who should be allowed in this country is one that the Constitution commits to the federal government.” But Vladeck noted that without the state’s participation, the federal government would have a much more arduous task.

“So a state can’t say it is legally objecting, but it can refuse to cooperate, which makes thing much more difficult.”

Kevin Appleby, director of migration policy at the U.S. Conference of Catholic Bishops, said one tactic states could use would be to cut their own funding in areas such as resettling refugees. The conference is the largest refugee resettlement organization in the country.

But “when push comes to shove, the federal government has both the plenary power and the power of the 1980 Refugee Act to place refugees anywhere in the country,” Appleby said.

More than 250,000 people have died since the violence broke out in Syria in 2011, and at least 11 million people in the country of 22 million have fled their homes. Syrians are now the world’s largest refugee population, according to the United Nations. Most are struggling to find safe haven in Europe.

In announcing that his state would not accept any Syrian refugees, Texas Gov. Greg Abbott tweeted Monday on his personal account, “I demand the U.S. act similarly,” he said. “Security comes first.”

In a letter to President Barack Obama, Abbott said “American humanitarian compassion could be exploited to expose Americans to similar deadly danger,” referring to Friday’s deadly attacks in Paris.

In a statement from Georgia’s governor, Republican Nathan Deal, he said Georgia will not accept Syrian refugees “until the federal government and Congress conducts a thorough review of current screening procedures and background checks.”

“After full consideration of this weekend’s attacks of terror on innocent citizens in Paris, I will oppose any attempt to relocate Syrian refugees to Alabama through the U.S. Refugee Admissions Program,” Bentley said Sunday in a statement.

“As your governor, I will not stand complicit to a policy that places the citizens of Alabama in harm’s way.”

There is currently no credible threat against the state, the governor’s office said, and no Syrian refugees have been relocated to Alabama so far.

As the list of states blocking refugees grows, at least one state, Delaware, announced that it plans to accept refugees.

“It is unfortunate that anyone would use the tragic events in Paris to send a message that we do not understand the plight of these refugees, ignoring the fact that the people we are talking about are fleeing the perpetrators of terror,” Gov. Jack Markell said in a statement. 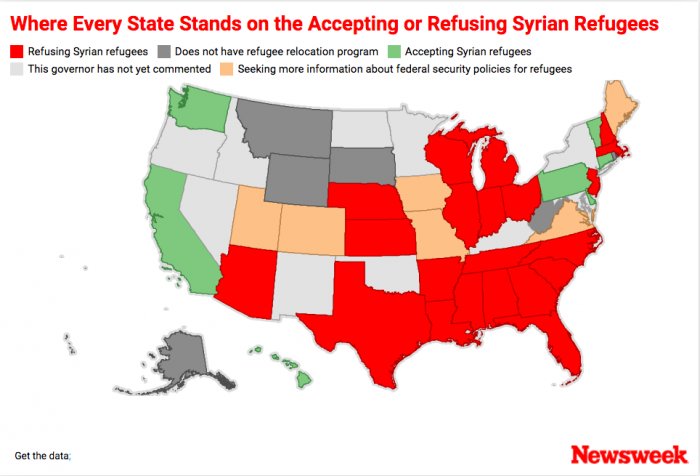 “Michigan is a welcoming state and we are proud of our rich history of immigration. But our first priority is protecting the safety of our residents,” he said in a statement.

Snyder demanded that the Department of Homeland Security review its security procedures for vetting refugees but avoided blanket suspicion of people from any region.

“It’s also important to remember that these attacks are the efforts of extremists and do not reflect the peaceful ways of people of Middle Eastern descent here and around the world,” Snyder said.

And Arkansas Gov. Asa Hutchinson posted on his official Twitter account that he would “oppose Syrian refugees being relocated to Arkansas.”

Action taken by some states is similar to several European countries who have forcefully opposed accepting refugees. Hungary built a razor-wire fence along its border, and neighboring countries have been following suit. And previously generous countries such as Sweden and Germany that welcomed thousands were already pulling back.

Massachusetts Gov. Charlie Baker said in a statement, “(At) this time, I find the idea of accepting Syrian refugees highly concerning and have no plans to accept them into our state and believe the federal government has an obligation to carry out extensive background checks on everyone seeking to enter the United States.”

In response to the backlash against refugees, a Twitter hashtag “NotInMyName” began over the weekend and is gaining traction across social media. 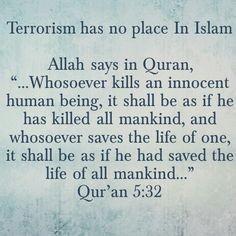 Many on social media stressed that Islam is a religion of love and peace and that the terrorists do not, in any way, represent the faith.

Mississippi, Ohio bristle at taking refugees
The governors of Ohio and Mississippi also announced their states would not allow Syrian refugees.

“The governor doesn’t believe the U.S. should accept additional Syrian refugees because security and safety issues cannot be adequately addressed. The governor is writing to the President to ask him to stop, and to ask him to stop resettling them in Ohio. We are also looking at what additional steps Ohio can take to stop resettlement of these refugees.”

Kasich is a Republican presidential candidate.

Mississippi Gov. Phil Bryant wrote on Facebook that he was working with the state’s homeland security department to “determine the current status of any Syrian refugees that may be brought to our state in the near future.

“I will do everything humanly possible to stop any plans from the Obama administration to put Syrian refugees in Mississippi. The policy of bringing these individuals into the country is not only misguided, it is extremely dangerous. I’ll be notifying President Obama of my decision today to resist this potential action.”

Louisiana: ‘Kept in the dark’

Louisiana governor and GOP presidential candidate Bobby Jindal complained bitterly in an open letter to Obama that the federal government had not informed his government about refugees being relocated to his state last week.

“It is irresponsible and severely disconcerting to place individuals, who may have ties to ISIS, in a state without the state’s knowledge or involvement,” Jindal said in his letter Saturday.

He demanded to know more about the people being placed in Louisiana to avoid a repeat of the Paris attacks and wanted to know whether screening would be intensified for refugees holding Syrian passports.

And he suggested Obama hold off on taking in more refugees.

“We all have heart and we all want people taken care of, but with the problems our country has, to take in 250,000 — some of whom are going to have problems, big problems — is just insane. We have to be insane. Terrible,” Donald Trump said at a rally in Beaumont, Texas.

The Obama administration has previously announced plans to take in 10,000 Syrian refugees next year.

While addressing reporters on Monday, Obama called out Republican candidates who have objected to admitting refugees to the United States.

“When I hear a political leader suggesting that there should be a religious test for which a person who is fleeing from a war torn country is admitted… when some of those folks themselves come from families who benefited from protection when they were fleeing political persecution, that is shameful,” the President said. “We don’t have religious tests to our compassion.”

A senior White House security official attempted to allay concerns about the vetting of Syrian refugees.

On NBC’s “Meet the Press” Sunday, White House Deputy National Security Adviser Ben Rhodes said, “We have very extensive screening procedures for all Syrian refugees who have come to the United States. There is a very careful vetting process that includes our intelligence community, our National Counter Terrorism Center, the Department of Homeland Security, so we can make sure that we are carefully screening anybody that comes to the United States.”
New York Rep. Peter King, speaking on Fox News, cast doubt on Rhodes’ comments.

“What he said about the vetting of the refugees is untrue. There is virtually no vetting cause there are no databases in Syria, there are no government records. We don’t know who these people are.”

On Sunday, investigators said that one of the Paris bombers carried Syrian identification papers — possibly forged — and the fear of Syrian refugees grew worse.

“It’s not that we don’t want to — it’s that we can’t,” Florida Sen. and Republican presidential hopeful Marco Rubio told ABC’s George Stephanopoulos. “Because there’s no way to background check someone that’s coming from Syria.”