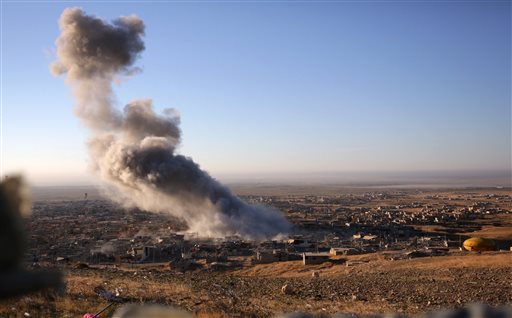 Smoke believed to be from an airstrike billows over the northern Iraqi town of Sinjar on Thursday, Nov. 12, 2015. Kurdish Iraqi fighters, backed by the U.S.-led air campaign, launched an assault Thursday aiming to retake the strategic town of Sinjar, which the Islamic State overran last year in an onslaught that caused the flight of tens of thousands of Yazidis and first prompted the U.S. to launch airstrikes against the militants. (AP Photo/Bram Janssen)
Share:
Supported by U.S.-led airstrikes, Kurdish Iraqi troops on Thursday seized part of a highway that is used as a vital supply line by the Islamic State group, a key initial step in a major offensive to retake the strategic town of Sinjar from the militants.

The town was overrun by the extremists as they rampaged across Iraq in August 2014, leading to the killing, enslavement and flight of thousands of people from the minority Yazidi community. The U.S. later launched an air campaign against the Islamic State militants, also known as ISIL, ISIS and, in Arabic, as Daesh.

Hours into Thursday’s operation, the Kurdish Regional Security Council said its forces controlled a section of Highway 47, which passes by Sinjar and indirectly links the militants’ two biggest strongholds — Raqqa in Syria and Mosul in northern Iraq — as a route for goods, weapons and fighters.

Coalition-backed Kurdish fighters on both sides of the border are trying to retake sections of that corridor as part of Operation Free Sinjar.

“By controlling Highway 47, which is used by Daesh to transport weapons, fighters, illicit oil and other commodities that fund their operations, the coalition intends to increase pressure … and isolate their components from each other,” a coalition statement said.

It said more than 150 square kilometers (95 miles) of territory had been retaken from the Islamic State group.

The coalition said 24 airstrikes were carried out over the past day, striking nine militant tactical units, nine staging areas and destroying 27 fighting positions, among other targets. Coalition aircraft have conducted more than 250 airstrikes in the past month across northern Iraq.

The Kurdish fighters also said they had secured the villages of Gabarra, on the western front, and Tel Shore, Fadhelya and Qen on the eastern front.

About 7,500 peshmerga fighters closed in on Sinjar from three sides, the Kurdish council said. In addition to taking the town and the highway, the operation aimed to establish “a significant buffer zone to protect the city and its inhabitants from incoming artillery.”

U.S. special operations forces were operating from a hill above the fighting in Sinjar, said Col. Steven Warren, the spokesman for the U.S.-led coalition in Baghdad. U.S. advisers were also positioned with Kurdish commanders, set back from the front line and behind Sinjar mountain, to remain away from the crossfire, Warren said.

According to U.S. guidelines, the U.S. forces have stay away from the front lines and the risk of enemy fire, he said, so they are operating from safe locations on Sinjar mountain.

Warren said two teams of commandos were working with the Kurds to locate enemy targets and call the information in to the Joint Operations Center in Irbil, where military officials then direct coalition aircraft flying in the area to conduct the airstrikes.

This is only the second military operation in Iraq in which U.S. special operations forces have moved closer to the front lines to help Kurdish forces identify targets and help direct airstrikes against the Islamic State. But while the strategy might be effective in northern Iraq, where the ethnic divisions are relatively clear, a similar use of commandos may not work in other parts of Iraq, such as Ramadi, where the battle lines are not as evident.

Warren said the first time that commandos worked with Kurdish peshmerga forces like this was during Operation Clover Field near Kirkuk about a month ago. The geography is flatter there, so the U.S. forces were stationed about two miles from the front lines.

Hisham al-Hashimi, an Iraqi expert on regional Islamic extremist groups, said during the current operation, Kurdish forces will aim to cut off eight unpaved roads used by the Islamic State for smuggling oil, exchanging weapons and ferrying militants between Syria and Iraq.

“Sinjar is not important for Daesh as an area. What is important is this road,” al-Hashimi said. He added that the highway is about 120 kilometers (75 miles) long and the battles are for control of about 10 percent of it.

Clouds of smoke above Sinjar were making it difficult for coalition warplanes to carry out airstrikes as thousands of peshmerga fighters moved toward the town from the east and west and massed at the outskirts, Kurdish officials said.

Aircraft struck around Sinjar ahead of the long-awaited offensive, with bombardment growing more intense at dawn.

The town, located at the foot of Mount Sinjar about 30 miles (50 kilometers) from the Syrian border, is not an easy target. An attempt by the Kurds to retake it stalled in December. The militants have been reinforcing their ranks in Sinjar recently in expectation of an assault, although the coalition was not able to give specifics on the size of the IS forces.

“On the radio, we hear (IS) calling for reinforcements from Syria,” said Rebwar Gharib, a deputy sergeant on the central front line.

A spokesman for U.N. Secretary-General Ban Ki-moon said “any efforts to push back Daesh are to be welcomed.”

But the spokesman, Stephane Dujarric, said it was critical that any operation be done with international humanitarian law.

The extremists inflicted a wave of terror in the Sinjar area against the Yazidis, members of an ancient religion whom the Islamic State views as heretics and devil-worshippers. An untold number were killed in last year’s assault, and hundreds of men and women were kidnapped. The women were enslaved and given to militants in Iraq and Syria, while many of the men were believed to be killed or forced to convert.

Tens of thousands of Yazidis fled into the mountains, where the militants surrounded them, leaving them trapped and exposed in the blazing heat.

The crisis prompted the U.S. to launch air drops of aid to the stranded. On Aug. 8, 2014, it launched the first round of airstrikes in what would mark the beginning of a broader coalition effort to battle the militant group in Iraq and Syria.

In December, Kurdish fighters in northwestern Iraq managed to drive the militants out of areas on the other side of the mountain, opening a corridor that helped many of the remaining Sinjaris to escape. Those Kurdish fighters then tried to advance into the town of Sinjar itself but were fought off by the militants.

Various Kurdish militias on the town’s edge have been fighting guerrilla battles for months with IS, damaging or destroying much of the picturesque town of ancient, narrow streets lined with modest stone homes. The factions include the Turkey-based Kurdish Workers’ Party (PKK), the Syria-based People’s Protection Units (YPG) and Yazidi-led forces billing themselves as the Sinjar Resistance. Iraqi Kurdish fighters have also held positions farther outside the town.