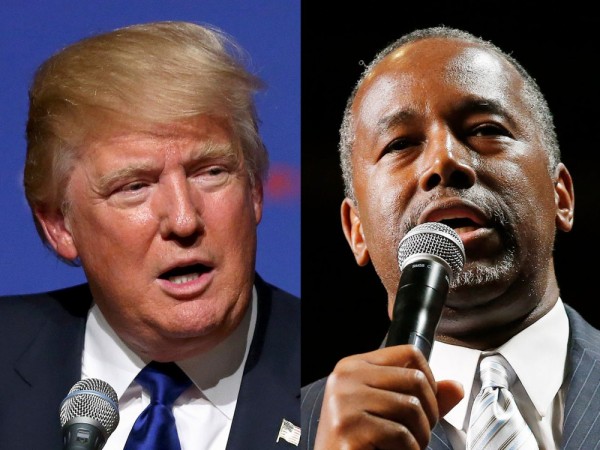 Less than three months before the kick-off Iowa caucuses, there is growing anxiety bordering on panic among Republican elites about the dominance and durability of Donald Trump and Ben Carson and widespread bewilderment over how to defeat them.

Party leaders and donors fear nominating either man would have negative ramifications for the GOP ticket up and down the ballot, virtually ensuring a Hillary Rodham Clinton presidency and increasing the odds that the Senate falls into Democratic hands.

The party establishment is paralyzed. Big money is still on the sidelines. No consensus alternative to the outsiders has emerged from the pack of governors and senators running, and there is disagreement about how to prosecute the case against them. Recent focus groups of Trump supporters in Iowa and New Hampshire commissioned by rival campaigns revealed no silver bullet.

In normal times, the way forward would be obvious. The wannabes would launch concerted campaigns, including television attack ads, against the front-runners. But even if the other candidates had a sense of what might work this year, it is unclear if it would ultimately accrue to their benefit. Trump’s counter-punches have been withering, while Carson’s appeal to the base is spiritual, not merely political. Even if someone was able to do significant damage to them, there’s no telling who their supporters would turn to, if anyone.

“The rest of the field is still wishing upon a star that Trump and Carson are going to self-destruct,” said Eric Fehrnstrom, a former adviser to 2012 nominee Mitt Romney. But, he said, “they have to be made to self-destruct. . .Nothing has happened at this point to dislodge Trump or Carson.”

Fehrnstrom pointed out that the fourth debate passed this week without any candidate landing a blow against Trump or Carson. “We’re about to step into the holiday time accelerator,” he said. “You have Thanksgiving, Christmas, New Year’s, then Iowa and a week later, New Hampshire, and it’s going to be over in the blink of an eye.”

According to other Republicans, some in the party establishment are so desperate to change the dynamic that they are talking anew about drafting Romney — despite his insistence that he will not run again. Friends have mapped out a strategy for a late entry to pick up delegates and vie for the nomination in a convention fight, according to the Republicans, who were briefed on the talks, though Romney has shown no indication of reviving his interest.

For months now, the GOP professional class assumed Trump and Carson would fade with time. Voters would get serious, the thinking went, after seeing the outsiders share a stage with more experienced politicians at the first debate. Or when summer turned to fall, kids went back to school and parents had time to assess the candidates. Or after the second, third or fourth debates, certainly.

None of that happened, of course, leaving establishment figures disoriented. Consider Thomas H. Kean Sr., a former New Jersey governor who for most of his 80 years has been a pillar of his party. His phone is ringing daily, bringing a stream of exasperation and confusion from fellow GOP power brokers.

“People usually start off in the same way: Pollyanna-ish,” Kean said. “They assure me that Trump and Carson will eventually fade. Then we’ll talk some more and I give them a reality check. I’ll say, ‘The guy in the grocery store likes Trump, so does the guy who cuts my hair. They’re probably going to stick with him. Who knows if this ends?’”

South Carolina Gov. Nikki Haley, herself an outsider who rode the tea party wave into office five years ago, explained the phenomenon.

“You have a lot of people who were told that if we got a majority in the House and a majority in the Senate, then life was gonna be great,” she said in an interview Thursday. “What you’re seeing is that people are angry. Where’s the change? Why aren’t there bills on the president’s desk every day for him to veto? They’re saying, ‘Look, what you said would happen didn’t happen, so we’re going to go with anyone who hasn’t been elected.’”

Before Tuesday’s debate in Milwaukee, Republican National Committee Chairman Reince Priebus and Wisconsin Gov. Scott Walker had a private reception at the Pfister Hotel with party leaders, donors and operatives. There was little appetite for putting a political knife in the back of either Trump or Carson, according to one person there. Rather, attendees simply hoped both outsiders would go away.

There are similar concerns about Sen. Ted Cruz of Texas, who is gaining steam and loathed by party elites, but they are more muted, at least for now.

Charlie Black, who has advised presidential campaigns since the 1970s, said he believes the 2016 contest “will eventually fall into the normal pattern of one outsider and one insider, and historically the insider always wins.”

Black said he was briefed on the findings of two recent private focus groups of Trump supporters in Iowa and New Hampshire that showed these voters knew little about his policy views beyond immigration. “Things like universal health care and other more liberal positions he’s taken in the past will all get out before people vote in New Hampshire,” he said. Black said the focus groups were commissioned by two rival campaigns, but he was not authorized to identify them.

One well-funded outside group, the Club for Growth, has aired ads attacking Trump in Iowa and more recently came out against Carson as well. “Donald Trump and Dr. Ben Carson are in over their heads,” said Club for Growth President David McIntosh, labeling both candidates as “pretenders.”

Still, the party establishment’s greatest weapon — big money — is partly on the shelf. Kenneth G. Langone, a founder of Home Depot and a billionaire supporter of New Jersey Gov. Chris Christie, said he is troubled that many associates in the New York financial community have so far refused to invest in a campaign due to the race’s volatility.

“Some of them are in, but too many are still saying, ‘I’ll wait to see how this all breaks,’” Langone said. “People don’t want to write checks unless they think the candidate has a chance of winning.” He said that his job, as a mega-donor, “is to figure out how we get people on the edge of their chairs so they start to give money.”

Many of Romney’s 2012 National Finance Committee members have sat the race out so far, including Peter A. Wish, a Florida doctor whom several 2016 candidates have courted.

“I’m not a happy camper,” Wish said. “Hopefully somebody will emerge who will be able to do the job,” but, he added, “I’m very worried that the Republican-base voter is more motivated by anger, distrust of D.C. and politicians and will throw away the opportunity to nominate a candidate with proven experience that can win.”

The concern among some party elites goes beyond electability, according to one Republican strategist, who was granted anonymity to speak frankly about the worries.

“We’re potentially careening down this road of nominating somebody who frankly isn’t fit to be president in terms of the basic ability and temperament to do the job,” this strategist said. “It’s not just that it could be somebody Hillary could destroy electorally, but what if Hillary hits a banana peel and this person becomes president?”

Concern about Trump intensified this week after he made two comments that could prove damaging in a general election. First, he explained his opposition to raising the minimum wage by saying “wages are too high.” Second, he said he would create a federal “deportation force” to remove the more than 11 million undocumented immigrants living in the United States illegally.

“To have a leading candidate propose a new federal police force that is going to flush out illegal immigrants across the nation? That’s very disturbing and concerning to me about where that leads Republicans across the board,” said Dick Wadhams, a former GOP chairman in Colorado, a swing state where Republicans are trying to pick up a Senate seat next year.

Said Austin Barbour, a veteran operative and fundraiser now advising former Florida governor Jeb Bush: “If we don’t have the right [nominee], we could lose the Senate and we could face losses in the House. Those are very, very real concerns. If we’re not careful and we nominate Trump, we’re looking at a race like Barry Goldwater in 1964 or George McGovern in 1972, getting beat up across the board because of our nominee.”

George Voinovich, a retired career politician who rose from county auditor to mayor of Cleveland to governor of Ohio to U.S. senator, said this cycle has been vexing.

“This business has turned into show business,” said Voinovich, who is backing Ohio Gov. John Kasich. “We can’t afford to have somebody sitting in the White House who doesn’t have governing experience and the gravitas to move this country ahead.”