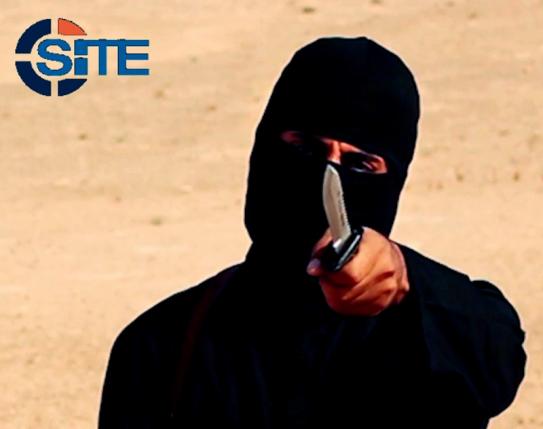 A masked, black-clad militant, who has been identified by the Washington Post newspaper as a Briton named Mohammed Emwazi, brandishes a knife in this still image from a 2014 video obtained from SITE Intel Group February 26, 2015. REUTERS/SITE Intel Group/Handout via Reuters
Share:

The United States targeted British Islamic State leader “Jihadi John” in an air attack in northern Syria which Britain said would “strike at the heart of Islamic State” if the militant’s death is confirmed.

British Prime Minister David Cameron said the death of Mohammed Emwazi, who was known as Jihadi John after appearing in videos showing the killings of U.S. and British hostages, could not yet be confirmed and the Pentagon said it was still assessing the effectiveness of the strike.

But a U.S. official said Thursday’s attack in the town of Raqqa, Islamic State’s de facto capital, probably killed Emwazi and the Syrian Observatory for Human Rights, a monitoring group, quoted sources in Raqqa as saying he had been blown to pieces.

He initially quoted sources in Raqqi as saying the body of “an important British Jihadi” was in the town’s hospital but later quoted them as saying Emwazi’s body, and those of his three militant comrades, had been left in charred pieces.

Shown in the videos dressed entirely in black, a balaclava covering all but his eyes and the bridge of his nose, Jihadi John became a menacing symbol of Islamic State brutality and one of the world’s most wanted men. He was born in Kuwait but brought up in Britain.

The British government said it had “been working hand in glove with the Americans” to defeat Islamic State “and to hunt down those murdering Western hostages.”

Speaking outside his Downing Street residence, Cameron described Emwazi as “a barbaric murderer” who “posed an ongoing and serious threat to innocent civilians, not only in Syria but around the world and in the United Kingdom too”.

“If this strike was successful — and we still await confirmation of that — it will be a strike at the heart of ISIL (Islamic State),” he said in comments shown live on television.

“It will demonstrate to those who would do Britain, our people and our allies harm, we have a long reach, we have unwavering determination and we never forget about our citizens.”

He said the U.S. air strike resulted from a combined effort between Britain and the United States and was an act of self-defense: “It was the right thing to do”.

U.S. President Barack Obama has promised justice after the deaths of American hostages and the United States is seeking to increase pressure on Islamic State fighters, who have seized parts of Syria and Iraq, and who Obama has vowed to defeat.