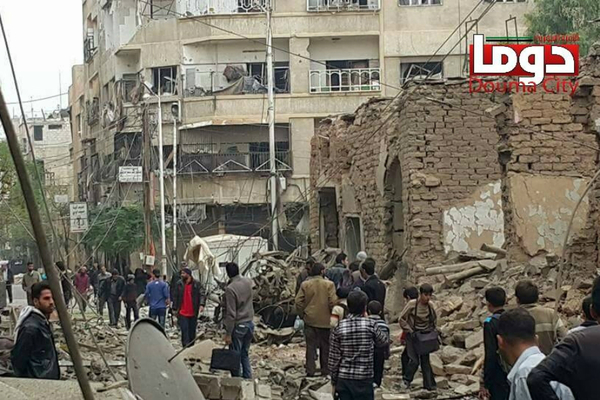 In this photo provided by the Syrian anti-government group Douma Revolution, which has been authenticated based on its contents and other AP reporting, people gather near damaged buildings in the aftermath of an airstrike that activists said was carried out by Russia, in Douma, Syria, Oct. 29. Russian airstrikes have reportedly hit at least a half dozen medical facilities in Syria, according to activists.
Share:
When it comes to gauging the impact of the Russian intervention in Syria, health workers simply point to the high-stress workdays at Bab Al-Hawa Hospital.

The emergency services facility in northern Syria has been spared by Russian warplanes. But it carried out 12,000 consultations and more than 1,300 operations in October, twice its monthly summer average. The influx came in the wake of attacks on hospitals and clinics in rebel-held areas that humanitarian and medical workers blame on Moscow.

“We are now under greater pressure,” says Amer al-Fajj, who handles public relations at the hospital, which sits near the border with Turkey. “We have a constant stream of casualties. It never stops. All the casualties from Aleppo are coming here.”

Attacks on medical facilities are hardly unusual in the context of the Syrian conflict – as of the end of September, government forces were responsible for 283 out of 313 such attacks, according to Physicians for Human Rights. These have killed nearly 700 medical personnel, pushed doctors to operate in basements, and spurred the construction of underground hospitals.

But the extent to which Russia appears to have targeted hospitals – and the force with which it has struck – has severely complicated relief efforts. One doctor and three first responders have been killed in the escalated bombing, according to the Violations Documentation Center in Syria, a monitoring group. The hospital targeting has also hastened the exodus of Syrian medical workers and made civilian life in rebel-held areas even less ​bearable​, according to relief workers.

“The active engagement of Russia in the conflict and specifically its attacks on the health care infrastructure is exacerbating an already dire humanitarian crisis,” says Widney Brown, programs director at Physicians for Human Rights. “It is inexplicable why Russia would claim it is attacking ISIS, but instead attack hospitals and clinics. All these attacks must stop.”

The advocacy group says three hospitals were hit within four days after Russian air strikes began on Sept. 30 – all of them more than 30 miles from areas held by the Islamic State, which Moscow claims is its primary target. Russia’s defense ministry consistently reports carrying out “precision strikes” in areas where hospitals have allegedly been attacked. That suggests Russian forces are either actively targeting these hospitals or that claims of precision are propaganda, the group says.

While field hospitals have adopted tactics to avoid aerial detection, their coordinates – like those of major hospitals – are generally known to the regime. The positions of medical structures have been flagged to the international coalition against the Islamic State but many are reluctant to directly share such sensitive data with Russia, which backs Damascus.

Sitting in his office in the Turkish town of Reyhanli, across the border from Bab Al-Hawa, Dahar Zedan counts at least 14 Russian attacks on medical points since Sept. 30. Mr. Zedan, a member of the Union of Medical Care and Relief Organizations (UOSSM), says that aside from the apparent targeting, Russian strikes cause far more damage than those of the Syrian regime.

The Al-Watan hospital and Bab Al-Hawa have been struck by the Syrian Air Force multiple times but remain operational and standing, he points out. But large sections of a costly new medical facility, built in underground caves in Hama Province to protect doctors and patients from bombings, crumbled under a presumed Russian air strike.

“When a hospital is targeted by the Russians, it is either completely or partially destroyed,” says Zedan, listing the differences in flight patterns and aircraft that allow Syrians to distinguish Moscow’s planes from those of Assad’s regime or the US-led coalition against the Islamic State.

UOSSM has sent a letter to the UN Security Council outlining the damage. But “the Russians’ first reaction to our letter was to say that we are liars,” says Zedan. “They said if you don’t want us to hit the hospitals give us the coordinates. We are still debating whether to give them.”

Russian air strikes have supported regime ground operations in Aleppo, Idlib, Homs, Hama, and Daraa in the south, displacing more than 100,000 people. On Oct. 20, Russia mimicked Syrian tactics, carrying out a double-tap strike in Sarmin, Idlib – an event captured on camera by a White Helmet first responder who was seriously wounded in the second strike.

The Syrian Institute for Justice and Accountability says that Russian fighter jets fired 815 surface-to-air missiles and dropped 24 cluster bombs on the Aleppo region in October. Out of the 200 individuals killed, it says, 20 were armed men. The toll includes 66 children and 16 women. The Syrian Network for Human Rights counted at least 254 civilians killed in the Russian offensive.

Abdullah Mustafa, a lanky man with a stern stare, says he barely survived a bombing run by a Sukhoi, Russia’s answer to the American F-15 and F-16. Three of his friends, who had been drinking coffee at the time, were killed instantly. He woke up days later at a hospital in Turkey with a long scar across his stomach and shrapnel still lodged in his cheeks.

“It was easier before,” says Mr. Mustafa, who wants to return to Syria as soon as he recovers. “When the regime came with barrel bombs, you could spot them, and everyone would rush to the ground floor. Today everyone is already living on the ground floor. When the Russians hit, you don’t hear them coming and the destruction is large scale.”

“The Russian war planes are not hitting IS areas or targets,” says Abdelaziz Kanaan, a colonel who defected from the regime to join the rebel Free Syrian Army. “Anything that is an obstacle to the Syrian regime is targeted by the Russian warplanes. They are putting pressure on the FSA and civilians to come to the table on the regime’s terms.”

But those who support the regime welcome that strategy, among them Fadila, a pseudonym for a ​resident of the Al-Jadeeda neighborhood in Aleppo.

“Russia and Syria have been friends for a very long time,” she says. “There is nothing wrong if they stand and fight with us. Look at how many countries are supporting the other side – Qatar, Turkey, and so many others.
CSM