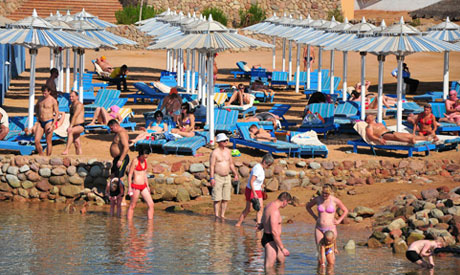 Russian tourists sunbathe and stand in the shallow waters at the Egyptian Red Sea resort of Sharm El-Sheikh . Russia airlifted 11,000 tourists home from Egypt over the weekend, most of them in a 24-hour period, according to the BBC.(Photo: AP )
Share:

Russia airlifted 11,000 tourists home from Egypt over the weekend, most of them in a 24-hour period, according to the BBC.

A stream of special flights evacuated the holidaymakers who were stranded since Moscow suspended all flights from Egypt on Friday, following the Oct. 31 crash of Metrojet Flight 9268 that broke up over the Sinai Peninsula, the BBC reported.

All 224 aboard the Airbus A321-200 were killed in the crash just 23 minutes after the plane took off from the Egyptian resort Sharm el-Sheikh on route to St. Petersburg. Most were Russian.

The Vice Chair of the U.S. Senate Select Committee on Intelligence, Sen. Dianna Feinstein, said there was a “strong probability” that a bomb took down the jet.