Pope reveals childhood dream, wanted to be butcher as a boy 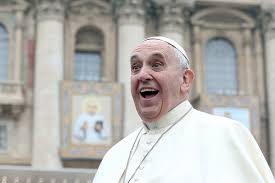 Pope Francis, who has vowed to reform the Roman Catholic Church, making it leaner and simpler, has disclosed that as a little boy he wanted to become a butcher.

He made the comment in an interview with Straatnieuws, a Dutch newspaper written by and for homeless people.

Asked if he ever dreamed of becoming pope when he was young, Francis recalled that he often went with his mother and grandmother to shop at a local market because there were no stores in the Argentine neighbourhood where he grew up.

“I’ll tell you a secret,” he said. “I was very little. I was four years old. One time they asked me what I wanted to be when I grew up and I said: ‘a butcher,'” he said.

Since his election in 2013 as the first non-European pope in 1,300 years, the pope has stressed that he wants a Church that is poor and for the poor.

He has urged Church leaders to live simpler lives and set the example himself by relinquishing the spacious papal apartments for a small suite in the Vatican guest house.

Francis told the paper that he would not have been able to live in the papal apartments, which he called big but not luxurious, “simply for mental reasons”.

“It would have meant being isolated … this place does me good because I feel free,” he said, adding that his current lifestyle made the Vatican feel “less of a gilded cage”.

“I miss the street,” he told the interviewers but declined their offer to step out of the Vatican for a pizza, something he said in a previous interview that he missed being able to do.

“I would love to but we would not be able to do it. The moment I step outside, people would mob me,” he said.

Asked if he ever felt pressure to sell some of the treasures of the Church, such as artistic treasures like Michelangelo’s Pieta, which is in St. Peter’s Basilica, he said he could not because they belonged to the whole world.

“I cannot put it (the Pieta) up for auction because it is not the property of the Church. It is in a church but it belongs to humanity. That is true for all the treasures of the Church,” he said, repeating what Church leaders have said about many of its artistic treasures.

The Vatican has auctioned off gifts given to the pope in lotteries and give the proceeds to the poor.