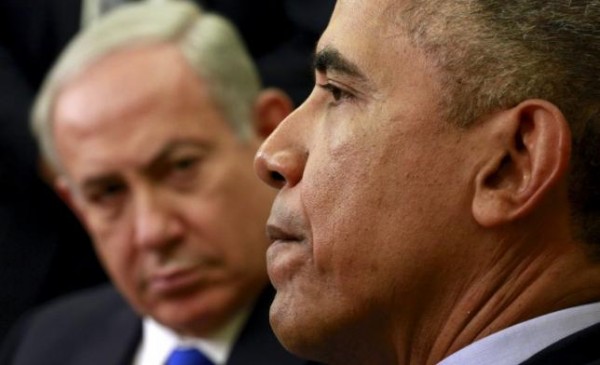 Israeli Prime Minister Benjamin Netanyahu assured U.S. President Barack Obama on Monday that he remained committed to a two-state solution to the Israeli-Palestinian conflict as they sought to mend ties strained by acrimony over Middle East diplomacy and Iran.

Meeting Obama for the first time since the signing of the Iran nuclear deal, Netanyahu said he backed a vision of “two states for two peoples” but maintained that any Palestinian state must be demilitarized and recognize Israel as the homeland of the Jewish people, a condition Palestinians have rejected.

Patching up relations could help smooth the way for a new 10-year U.S. military aid package, which Obama told Netanyahu he wanted to get a “head start” on negotiating. Israel, Washington’s chief Middle East ally, is seeking a record $5 billion a year, according to U.S. congressional sources.

Obama and Netanyahu, who have a history of testy White House encounters, showed no outward sign of tension, looking cordial and businesslike as they held their first face-to-face talks in 13 months.

The meeting was clouded by an ongoing wave of Palestinian stabbing and shooting attacks that have Israelis on edge at a time when Obama has concluded that a peace deal is beyond reach during the final 14 months of his presidency.

Obama condemned the latest wave of Palestinian violence and backed Israel’s right to defend itself but said he wanted to hear Netanyahu’s ideas for lowering tensions and “how we can make sure that legitimate Palestinian aspirations are met.”

Netanyahu’s recommitment to the two-state solution, the bedrock of U.S. diplomacy on the conflict for decades, could satisfy the Obama administration’s desire that he clarify his position after he appeared to backtrack on his pledge during a hard-fought re-election campaign earlier this year.

“I want to make it clear that we have not given up our hope for peace,” Netanyahu told reporters allowed in at the start of talks with Obama.

U.S.-sponsored peace talks between Israel and the Palestinians collapsed in 2014. The eruption of violence between the two sides last month has made an end to that bloodshed a more immediate priority.

The meeting was widely seen as an effort to move beyond tensions over U.S.-led nuclear diplomacy with Iran, Israel’s arch-foe, and differences over how to resolve the Israeli-Palestinian conflict.

Though Obama and Netanyahu sought to play down their disagreements, no one expected that the two leaders would have much success in overcoming their poor personal chemistry. Their worst public moment was a 2011 Oval Office encounter when Netanyahu lectured Obama on the suffering of the Jewish people through the ages.

This time, neither leader wanted a diplomatic blow-up. Netanyahu leaned forward listening intently as Obama spoke, sometimes nodding. Obama, his legs crossed, sometime cradled his chin in one hand. The two exchanged smiles at times and shook hands twice for the cameras.

Some of Obama’s aides believe, however, that beyond working to firm up security cooperation, Netanyahu is content to wait out the final stretch of Obama’s presidency, hoping for a better reception for his hardline approach from the next occupant of the White House.

U.S. voters will elect a new president in November 2016.

The meeting was seen as an important step in negotiations for a new 10-year U.S. defense aid pact, which could help burnish the right-wing prime minister’s security credentials, challenged by the violence at home.

Israel receives $3.1 billion from the United States annually and wants $5 billion per year for the next package, for a total of $50 billion over a decade, congressional officials have told Reuters. One U.S. official predicted the sides would settle for an annual sum of $4 billion to $5 billion.

Obama’s tangible support for Israel’s security could help deflect accusations from Republican presidential hopefuls that he and any Democratic successor are less pro-Israel than they profess to be.

“The security of Israel is one of my top foreign policy priorities, and that has expressed itself not only in words, but in deeds,” Obama said.

Netanyahu thanked Obama for that commitment.

The dispute over the deal that Iran reached in July with world powers, which calls for curbs on its nuclear program in return for sanctions relief, had driven an already rocky relationship between the two leaders to a new low.

Obama refused to see Netanyahu in March when the Israeli leader accepted an invitation from Republican leaders, without consulting the White House, and gave a speech to Congress in which he harshly criticized Obama’s negotiations with Iran.

“It’s no secret that the prime minister and I have had a strong disagreement on this narrow issue, but we don’t have a disagreement on the need to making sure that Iran does not get a nuclear weapon,” Obama said.

Now that Netanyahu has lost his fight against the Iran accord, he and Obama appeared determined to try to put relations on an even keel.

At the same time, Netanyahu was seeking to use his visit to patch up relations with some Democrats, who felt his fight against the Iran deal damaged the bipartisan consensus in Congress on Israel’s security, and heal a rift with more liberal segments of the American Jewish community.

He was due to address the conservative American Enterprise Institute on Monday as well as the liberal Center for American Progress on Tuesday.