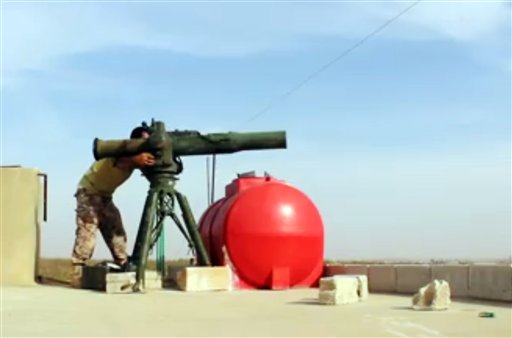 In this photo released on October 18, 2015, and provided by the Fursan al-Haq Syrian rebel brigade, which has been authenticated based on its contents and other AP reporting, a Free Syrian Army fighter of Fursan al-Haq brigade prepares to fire a U.S.-made anti-tank Tow missile, at Skeek village, in the country side of Hama province, Syria. Despite a month of heavy battering by Russian airstrikes, Syrias rebels have so far been able to fend off offensives by government forces trying to retake territory from the rebels heartland. The fierce fighting shows how even greater backing from Syrian President Bashar Assads international allies is not swiftly tipping the conflict in his favor. (Fursan al-haq Rebel Brigade via AP)
Share:

Despite a month of heavy battering by Russian airstrikes, Syria’s rebels have so far been able to fend off offensives by government forces trying to retake territory from the rebel’s heartland. The fierce fighting shows how even greater backing from Syrian President Bashar Assad’s international allies is not swiftly tipping the conflict in his favor.

Assad’s military has launched assaults on several fronts in the north and northwest the past weeks, supported by Russian airstrikes pummeling rebel positions that government forces are trying to retake. Assad’s troops have also been backed by the tougher fighters of Lebanon’s Hezbollah guerrilla army and combat advisers from Iran’s elite Revolutionary Guard — and top commanders from both Hezbollah and the Iranians have been killed, a sign of the intensity of the battles.

The rebels say they have been able to hold out because of support from their own allies: An increasing flow of American anti-tank TOW missiles that have allowed their fighters to blunt attempted advances by Assad’s forces. Despite more than 1,000 combat sorties by Russian aircraft hitting more than 2,000 targets, government forces’ gains have been minimal.

“We don’t deny that the airstrikes are effective, but they (troops) will not advance on the ground,” Lt. Col. Fares al-Bayoush, commander of the 1,300-strong Fursan al-Haq Brigade, told The Associated Press, speaking in the Turkish border city of Reyhanli.

The TOW rockets have been instrumental, he and other commanders said. The United States has been supplying the missiles to select rebel factions for months, part of its program alongside Saudi Arabia, Turkey and Qatar to boost the insurgency.

Al-Bayoush, a defector from Assad’s army, said his fighters have a constantly replenished supply and use them not only against tanks but also against troop formations and other positions. “We fire 15 TOWs and we get 15 TOWs in return,” he said.

The combination of Russian strikes and Assad’s ground offensives have also rallied the multiple rebel factions to defend northwest Idlib province, which they wrested completely from government control over the spring. The territory is now the heartland for the rebels, a mix of moderate nationalist factions and others with hard-line Islamic ideologies.

“There is a sort of competition now among the factions to excel in defending the areas so none of them can get accused of being a traitor for losing a strip of land,” said Hadi Abdullah, an opposition activist who travels with the rebels to the front lines to report on fighting. “They come to the rescue of each other on their different turf.”

The fighting suggests the Russians may run into the same reality as the 13-month-old American-led air campaign against the Islamic State group in Syria: Air power doesn’t automatically translate into victories on the ground. It also points to how international patrons have ensured each side can keep fighting in a war grinding toward the 5-year mark with more than 250,000 killed and millions displaced.

Nikolay Kozhanov, a fellow with the Russia and Eurasia Programme at the international affairs think tank Chatham House, said Russia’s intervention is “not enough to completely change the situation in the favor of the regime. … When it comes to urban fighting the Syrian army is still quite limited in its capacities to advance.”

Soon after the Russian air campaign began on Sept. 30, Assad’s forces launched several ground offensives. One campaign is aimed at taking back territory in Idlib to carve out a belt separating the province from neighboring Hama province and connect government-held areas in Hama with Assad’s stronghold on the Mediterranean coast.

Moscow says its air campaign is intended to crush the Islamic State group and other Islamic militants, not to help Assad in the war. But while some strikes have targeted IS forces, more often they have battered rebels factions that are rivals of IS and seem directly intended to help the Syrian military’s offensives.

For example, Russian strikes have hit the rebel-held town of Kfar Naboudeh almost daily, according to Rami Abdurrahman, head of the Britain-based Syrian Observatory for Human Rights, which monitors the Syrian war. The town, in Idlib, is near the border with Hama province, and Assad’s troops and Hezbollah fighters have been battling to try to seize it as part of a campaign aimed at increasing protection to a string of Alawite-majority, pro-government towns in Hama.

Backed by the strikes, Assad’s forces briefly captured the town, but days later rebel forces retook it. During the fighting, Hezbollah commander Hassan Hussein al-Haj was killed, believed to be the highest-ranking figure lost by the group since it joined Syria’s civil war in 2012.

The Russian airstrikes have been punishing for the rebels, several commanders said. The more advanced Russian warplanes pack a far more powerful and accurate punch and have better observation capabilities than Assad’s air force. Al-Bayoush said he sent home 130 fighters who had been undergoing training because if a missile hit their training camp, “there would be a massacre.”

Another local commander, Murhaf Anjeer from the small Al-Arbaeen Battalion, said the Russian strikes were “wearing out” his fighters, leaving them constantly on edge that they are about to be hit from the air.

But the rebels have adapted by avoiding fixed positions and hiding their movements better. Factions rely more on small groups of fighters that fire TOWs and retreat to avoid drawing attention of warplanes.

The battles have continued in the farmland and villages all along the Idlib-Hama border. A video released by Fursan al-Haq last month showed one of its fighters using a TOW to destroy a government tank at Tell Skeik, a hill that has gone back and forth between the two sides. In parts of Hama, jihadi fighters from Uzbekistan and other parts of Central Asia with the hard-line Syrian rebel group Army of Conquest have played a big role in repelling government attacks, Abdurrahman said.

Another government campaign that has stalled aimed to open the highway linking Hama with the city of Homs, further south. In weeks of fighting, troops have been unable to advance despite Russian strikes on the rebel-held towns of Talbiseh and Rastan.

The Russian campaign has also been hitting the Islamic State group, which controls a large stretch from the outskirts of the northern city of Aleppo east across the country to Iraq.

Russian warplanes have been striking almost daily around Kweiras, a base of Assad’s military in Aleppo province that IS fighters have been besieging for months. Backed by the strikes, Syrian troops have been trying to reach Kweiras and break the siege. They have so far reached about 5 miles away in heavy fighting that killed a senior Iranian Revolutionary Guard commander, Gen. Hossein Hamedani.

IS fighters have lashed back. They captured several towns north of Aleppo from rebels. They also launched a surprise attack south of Aleppo, capturing part of a main highway used by the military to supply government-held parts of the city. Assad’s forces battled for two weeks and finally took back the road Wednesday.

Several rebel commanders said Russia’s entry in to the battle only encourages them by showing how reliant Assad is on his allies. In July, Assad acknowledged in a speech that his troops had lost territory and were running short on manpower

“The regime is collapsing and only the Russians are propping them up,” said Ahmed Saoud, a commander in the 13th Division, another American-based FSA faction that has gotten new infusions of TOWS and ammunition. “Even though we are the weakest link in the Syrian conflict, we will win with our weapons.”