Libya warns it could flood Europe with migrants 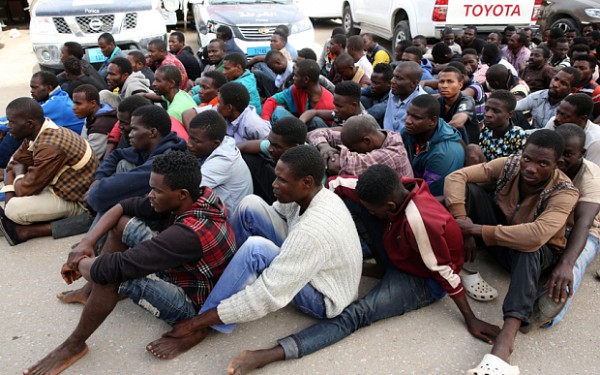 illegal immigrants who were intercepted by Libyan coast guards off Tripoli coast Photo: Xinhua/REX Shutterstock
Share:
Libya has issued a veiled threat to send “hundreds of thousands” of extra migrants to Europe if Brussels does not give official recognition to its self-declared Islamist government.

Officials say they could hire boats to send large numbers of African migrants across the Mediterranean, massively adding to the numbers already reaching Europe’s borders.

The warning was made by a spokesman for Libya’s General National Congress in an interview with The Telegraph in the Libyan capital, Tripoli.

The Congress took control of Tripoli last year after fighting against forces loyal to the internationally- recognised House of Representatives government, and is not recognised by the European Union as Libya’s legitimate government. A fortnight ago, both factions also rejected the terms of a United Nations-brokered peace deal.

Jamal Zubia, the Congress’s foreign media spokesman, told The Telegraph that Libya was currently spending tens of millions of pounds a year stopping migrants from crossing the Mediterranean, through the use of detention centres and repatriation programs.

He said that if Europe continued to refuse to recognise the Congress’s authority, the Libyan government could reverse the policy.

“To be honest, I have advised my goverment many times already that we should hire boats and send them to Europe,” he said. “We are protecting the gates of Europe, yet Europe does not recognise us and does not want to recognise us. So why should we stop the migrants here?”

Libya has long been a major transit country for migrants from sub-Saharan Africa, but the numbers have grown much greater thanks to the security vacuum that followed Colonel Gaddafi’s fall in 2011.

Last year alone, an estimated 170,000 migrants arrived by boat from Libya in Italy. Between January and September this year the figure was 130,000, although that reflects greater use of the so-called “Aegean” route via Turkey and Greece, where 360,000 people have so far crossed in 2015.

On Monday, the UN said that in total, more than 218,000 migrants and refugees crossed the Mediterranean to Europe in October – the highest monthly figure on record, and more than during the whole of 2014.

Contrary to popular impression, the Libyan government does not turn a complete blind eye to people-smuggling.

Its Department for Combating Illegal Immigration employs around 8,000 staff and detains large numbers of migrants for entering the country illegally, as well as working with the International Organisation for Migration on voluntary repatriation programmes.

However, the sheer number of migrants vastly outweighs the capacity of the authorities to deal with them, even though Libya spend around £80m a year on the issue.

With the country still in the process of rebuilding its government after Col Gaddafi’s overthrow, many officials also resent deploying resources at what they see as a European problem.

Mr Zubia stressed that his government had no immediate plans to stop its efforts to half the flow of migrants, or to start hiring ships to speed their passage to Europe.

But his comments will be seen as a reminder to Europe that the GNC in Tripoli has ways it can retaliate for the EU’s refusal to recognise it as a government.

The Congress is the political wing of the Libya Dawn coalition, a range of both moderate and more radical Islamist fighting groups that were involved in Col Gaddafi’s overthrow.

A rival government, known as the House of Representatives, now operates out of the small eastern city of Tobruk and has no effective control over Tripoli, despite being internationally recognised.

Mr Zubia added: “If we were not a responsible state, we would hire boats and send the migrants to Europe. Every day we catch hundreds of them, even though we do not have the necessary resources, and pay for their food and medical services, even when hundreds of thousands of them are here. It is a strategic threat, yes, but I would not rule out us doing it one day.”

He acknowledged that his comments were an echo of those made in 2005 by Col Gaddafi, who infamously threatened to “turn Europe black” if Brussels did not pay him billions of euros in aid grants.

“Gaddafi did this threat and brought Europe to its knees,” Mr Zubia added. “You need to remember that we are doing your protection for you. We cannot stay forever doing this craziness, spending lots of money on nothing.”

Last week, the UN backed the appointment of a new UN special envoy to Libya who will continue efforts to end the political deadlock in the country, which is still causing sporadic fighting. Martin Kobler will take over from Bernardino Leon, who has spent months trying to get the Congress and House of Representatives factions to form a national unity government.

Hardliners on both sides have so far resisted the power-sharing deal, despite the fact that it would open the door to foreign aid and help with nation-building.

Who are Libya’s rival powers?

Why has Libya got two governments?
It doesn’t officially. But since Col Gaddafi’s fall in 2011, two rival factions have emerged that want power.
Who are they?
One is the General National Congress (GNC) which is allied to the Libya Dawn Islamist coalition. Some are moderate and some aren’t. The other faction is a coalition generally referred to as the House of Representatives, (HoR) which is more secular.
So they share an office?
Certainly not. The GNC runs Tripoli, having pushed the HoR out of the Libyan capital last year. The HoR then moved to the eastern city of Tobruk, where it’s now a government in exile, even though it’s recognised internationally.
Why don’t they get along?
The GNC thinks the HoR is made up of ex-Gaddafi loyalists bent on returning the old regime to power. The HoR thinks the GNC wants hardline Islamic rule.
Who’s right?
There are actually moderates on both sides. But so far, a UN-backed peace deal has been turned down by hardliners in each camp.
The Telegraph