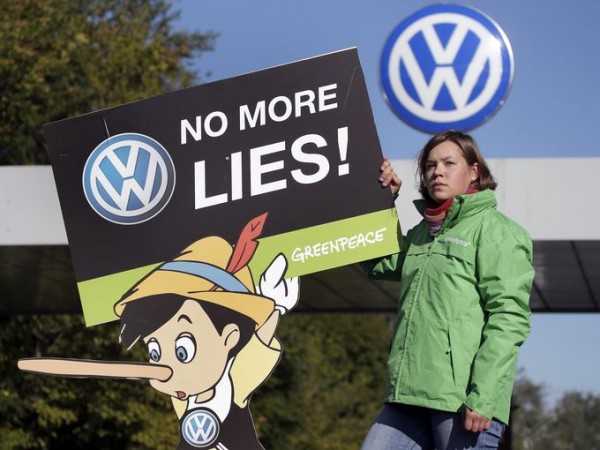 Volkswagen has said up to 11 million vehicles worldwide across several of its brands contain the diesel engine with the software used to cheat on U.S. emissions tests, here an activist of the environmental protection organization Greenpeace protests Sept. 25, 2015, in front of a factory gate of the German car manufacturer Volkswagen in Wolfsburg, Germany. Michael Sohn, AP
Share:

Volkswagen Group’s emissions scandal on Monday broadened to include a range of sport-utility vehicles — including luxury Audi and Porschemodels — in a revelation that casts doubt on the company’s past statements about the situation.

The U.S. Environmental Protection Agency accused the company of installing so-called defeat-device software on SUVs and additional luxury cars not previously implicated in the scandal.

The allegation raises questions about the breadth of the German automaker’s response to the scandal since the EPA first accused the company of cheating emissions regulations on diesel cars on Sept. 18.

After the initial accusations, Volkswagen Group quickly admitted that it had flouted regulations on up to 11 million diesel cars worldwide, such as certain versions of the Jetta, Passat, Golf and Beetle.

But Monday’s announcement broadens the scandal to more than 10,000 new vehicles in the U.S.: the 3-liter diesel engine versions of the 2014 Volkswagen Touareg, the 2015 Porsche Cayenne, and the 2016 Audi A6 Quattro, A7 Quattro, A8, A8L, and Q5. Those vehicles are among Volkswagen Group’s most profitable.

The worldwide figure could be much higher since the company is a relatively small player in the U.S. auto market. It also marks the first time the Porsche sports car brand has been implicated in the scandal.

The additional vehicles could expose the automaker to more than $375 million in Clean Air Act penalties — on top of the $18 billion in penalties the company could incur from the diesel car violations.

“We have clear evidence of these additional violations and we thought it was important to put Volkswagen on notice and to inform the public,” Cynthia Giles, assistant administrator for EPA’s Office of Enforcement and Compliance Assurance, told reporters on a conference call.

The EPA, California Air Resources Board and Environment Canada discovered the additional cheating while testing Volkswagen’s vehicles. They have found nothing similar while conducting tests of other car companies.

Volkswagen engineers took a sneaky approach when fitting these vehicles with the “defeat device” software, the EPA alleged.

“At exactly one second after the completion” of those tests, Giles said, the vehicles flip back into “normal mode” and continue emitting nitrogen oxides are high levels.

Volkswagen representatives did not immediately respond to requests seeking comment.

Just five days ago, Volkswagen’s new CEO, Matthias Mueller, told reporters he would leave “no stone unturned to find out what exactly happened and to ensure nothing like this happens again.”

He acknowledged “a great need for change … in how we communicate with each other, in how we collaborate within the group, in our understanding of leadership, in how we deal with problems and mistakes.”

The global crisis has already spawned a U.S. Justice Department criminal probe, a cascade of consumer lawsuits, the EPA’s ongoing investigation and various probes in Germany. The cost of the scandal could balloon into the tens of billions, analysts say.

EPA had already identified 482,000 VW diesel cars in the U.S. emitted harmful pollutants at rates of 10 to 40 times U.S. standards.

The models involved in the new revelation are spewing nitrogen-oxide emissions at rates of up to nine times the allowed standard, the EPA alleges.

Among the immediate questions is whether Volkswagen will be forced to stop selling the latest diesel models implicated in the scandal, which could deal a severe blow to the finances of dealers.

The company likely will also have to recall the vehicles. But developing a fix for the first round of cars has proven vexing. The earliest models require hardware and software fixes — and it could take years to fix all the cars, Volkswagen U.S. CEO Michael Horn recently told Congress.