Trump: Obama doesn’t know what he is doing in Syria 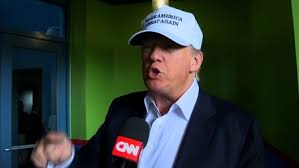 Donald Trump on Saturday knocked President Barack Obama’s decision to deploy fewer than 50 Special Operations forces on the ground in Syria, suggesting the strategy is a half-measure.

“I think we have a president who just doesn’t know what he’s doing,” Trump told CNN. “You either do it or you don’t do it. Fifty people. He puts 50 people.”

Trump did not say whether he would deploy more troops to Syria as president, but simply said, “You either do it or you don’t do it.”

The remarks are the first time Trump has reacted to Obama’s decision to deploy fewer than 50 Special Operations forces to Syria, which the White House announced Friday. The announcement came two years after Obama addressed the American public and said emphatically: “I will not put American boots on the ground in Syria.”

“The fact is, our strategy in Syria hasn’t changed,” White House Press Secretary Josh Earnest told reporters Friday. “The core of our military strategy inside of Syria is to build up the capacity of local forces. To take the fight to ISIL on the ground in their own country … This is an intensification of a strategy that the President announced more than a year ago.”

Trump spoke briefly with CNN on Saturday as he arrived at a campaign rally in Norfolk, Virginia, where his podium is stationed in front of the USS Wisconsin.

Trump, along with other 2016 GOP contenders, has been highly critical of Obama’s handling of the war against ISIS.

Trump has said that he would deploy American troops back to Iraq to combat ISIS but has argued against deepening U.S. involvement in Syria.

Instead, Trump has said that he would be in favor of allowing Russian President Vladimir Putin to continue his bombing campaign in the country, which has been met with objection by Washington, which believes Putin is trying to bolster the Syrian regime rather than attacking ISIS.

Trump also told CNN he would end super PACs if he became president.

Trump earlier this month called on other candidates to disavow their super PACs, days after a super PAC supporting his candidacy shut down amid Trump’s rejection of the group.