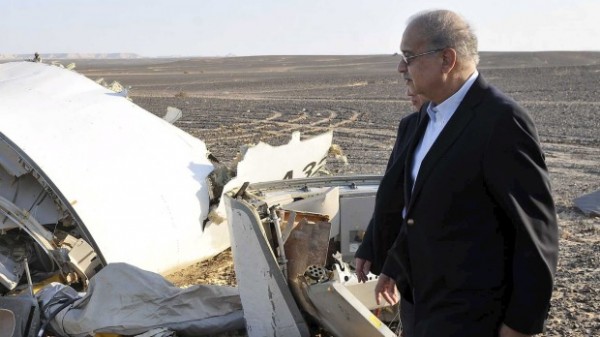 Egypt’s Prime Minister Sherif Ismail looks at the remains of the Russian plane which crashed on the Sinai peninsula.
Share:
Two black boxes from a Russian airliner that crashed in the Sinai Peninsula has been found, as officials dismiss claims it was shot down by IS jihadists.

All 224 people on board the Airbus A-321 died when it crashed shortly after it took off from the Red Sea resort of Sharm el-Sheikh bound for St Petersburg on Saturday.

A group affiliated to Islamic State claimed it downed the plane as revenge for Russian air strikes against IS in Syria, but Russia scoffed at the claim and Egyptian Prime Minister Sharif Ismail said it wasn’t technically possible to shoot down a plane at the altitude at which the airliner had been flying.

“The fighters of the Islamic State were able to down a Russian plane over Sinai province that was carrying over 220 Russian crusaders. They were all killed, thanks be to God,” a militant affiliate of Islamic State said in a statement on Twitter.

The claim of responsibility was also carried by the Aamaq website which acts as a semi official news agency for Islamic State. But the group gave no evidence, and was not believed to have the capability to bring down the jet at that altitude.

The claim is at odds with Egyptian security sources, who said early investigations suggested the plane crashed due to a technical fault.

Officials said the pilot reported a technical problem before before losing contact with air traffic controllers.

Russian Transport Minister Maxim Sokolov brushed off the IS claim, telling the Interfax news agency that such reports “must not be considered reliable.”

The Airbus A321, operated by Russian airline Kogalymavia, was flying from the Sinai Red Sea resort of Sharm el-Sheikh to St Petersburg in Russia when it went down in a desolate mountainous area of central Sinai soon after daybreak, the aviation ministry said.

Ayman al-Muqadem, a member of Egypt’s Aviation Incidents Committee, said the pilot had reported his intention to attempt to land at the nearest airport before the crash happened.

Security sources in North Sinai said an initial examination of the crash site showed a technical fault was the cause.

Two of Europe’s largest airlines have decided to avoid flying over the Sinai peninsula while they wait for clarity on the cause.

German carrier Lufthansa and Air France-KLM have decided to avoid the area for safety reasons, spokeswomen for the carriers said on Saturday.

Lufthansa has less than 10 flights a day that cross the area, she said.

“Air France confirms it has set up, as a precaution, measures to avoid flights over the zone of Sinai,” the spokeswoman for the carrier said.

About 150 bodies, including burnt corpses, were found in a 5km radius from the crashed aircraft.

The plane fell vertically, which led to large parts of it burning, the sources said.

A security officer at the scene initially said search and rescue teams heard voices in a section of the plane.

However, officials later confirmed that there were no survivors.

“I now see a tragic scene. A lot of dead on the ground and many who died whilst strapped to their seats,” the security officer said, speaking on condition of anonymity.

“The plane split into two, a small part on the tail end that burned and a larger part that crashed into a rock. We have extracted at least 100 bodies and the rest are still inside.”

Adel Mahgoub, chairman of the state company that runs Egypt’s civilian airports, said all passengers and crew were Russian citizens.

The Russian aviation authority Rosaviatsiya said in a statement that flight 9268 left Sharm el-Sheikh at 06:51 Moscow time (03:51 GMT) and was due into St Petersburg’s Pulkovo airport at 12:10.

The authority added that the aircraft failed to make scheduled contact with Cyprus air traffic control 23 minutes after take-off and disappeared from the radar.

The plane went down in a mountainous area in central Sinai and poor weather conditions have made it difficult for rescue crews to get to the scene, the officer said. Survivors and bodies of those on board would be flown to Cairo, the security source said.

Sinai is the scene of an insurgency by militants who support Islamic State. The rebels have killed hundreds of Egyptian soldiers and police and have also attacked Western targets in recent months.

Russia launched air raids against Syrian opposition groups including Islamic State on Sept. 30. Civil Aviation Minister Mohamed Hossam Kemal was quoted in a cabinet statement as saying it was too soon to determine the cause of the crash, but security sources said there was no indication the Airbus had been shot down or blown up.

The A321 is a 185-seat medium-haul jet in service since 1994, with over 1100 in operation worldwide and a good safety record. It is a highly automated aircraft relying on computers to help pilots stay within safe flying limits.

Within hours of the crash, Russia’s top Investigative Committee launched a criminal case against the airline, Kogalymavia.

RIA news agency reported that the Investigative Committee’s case had been brought under an article regulating “violation of rules of flights and preparations for them”.

Interfax reported committee spokesman Vladimir Markin as saying that the case had been brought under Article 263 of the Criminal Code: “Violation of the safety rules for movement and exploitation of air, sea or internal water transport”.

Markin also said that a group of investigators and crime experts had been formed and would head to Egypt.

“They will operate in agreement with the competent organs and together with the representatives of the Republic of Egypt in accordance with the norms of national and international law,” Markin said, according to Interfax.

The airline had previously been in trouble with Russian state transport regulator Rostransnadzor, which found violations when it last conducted a routine flight safety inspection of Kogalymavia, Interfax news agency quoted the watchdog as saying.

But after the inspection, which took place in March 2014, the airline remedied the breaches within the deadlines it had been set, Interfax reported.