Flight 7K9268: Russian plane broke up high in the air over Sinai, Egypt 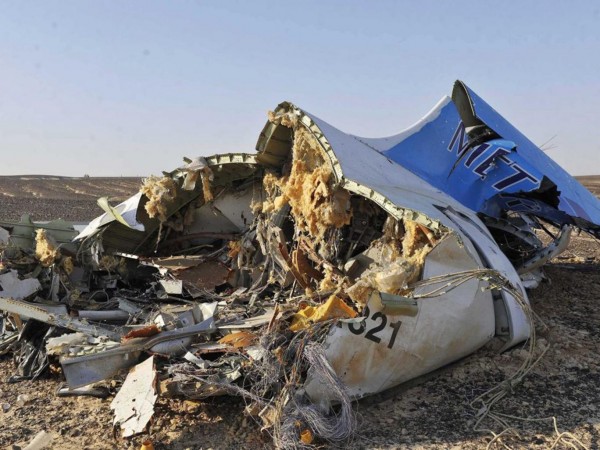 The Metrojet plane, bound for St. Petersburg in Russia, crashed 23 minutes after it took off from Egypt’s Red Sea resort of Sharm el-Sheikh on Saturday morning. The 224 people on board, all Russian except for four Ukrainians and one Belarusian, died.

Fragments of the plane were found scattered over a large area, indicating it disintegrated high in the air, said Alexander Neradko, head of Russia’s federal aviation agency. Neradko, along with two Russian Cabinet ministers, were in Egypt inspecting the crash site in a remote part of the northern Sinai Peninsula, where Egypt is fighting an Islamic insurgency.

However, Neradko wouldn’t comment on a possible reason for the crash, saying the probe was ongoing.

On Sunday, an Egyptian ground service official who conducted a pre-flight inspection of the Airbus A321-200 said the plane appeared to be in good condition.

The Egyptian official, who spoke on condition of anonymity because he was not authorized to speak to the media, said he was a member of a technical inspection team that included two Russians.

“We are all shocked. It was a good plane. Everything checked out in 35 minutes,” the official told The Associated Press. The closest the plane came to being in trouble, he said, was three months ago when the pilot aborted takeoff halfway through because of a system error.

“That’s almost routine though,” he said.

However, a Russian TV channel late on Saturday quoted the wife of the co-pilot as saying her husband had complained about the plane’s condition. Natalya Trukhacheva, identified as the wife of co-pilot Sergei Trukhachev, said a daughter “called him up before he flew out. He complained before the flight that the technical condition of the aircraft left much to be desired.”

Another Egyptian official had previously said that before the plane lost contact with air traffic controllers the pilot had radioed and said the aircraft was experiencing technical problems and that he intended to try and land at the nearest airport.

Despite the order, Metrojet said it will not fully suspend the flights of its six remaining A321s. It said it will check the planes one by one and continue operating them if they pass inspections. The conflicting claims couldn’t be immediately explained.

A local affiliate of the extremist Islamic State group claimed it “brought down” the aircraft, but Russia’s transport minister dismissed the claim. The militants did not offer any evidence to back up their claim.

In St. Petersburg, hundreds of people were bringing flowers and pictures to the city’s airport to commemorate the 224 victims.

Elena Vikhareva, 48, went with her son to lay flowers, saying “pain is piercing her heart” even though she had no relatives on the plane. Vladimir Povarov, 19, brought flowers with a friend, saying “we couldn’t remain indifferent.”

Other people were bringing planes made of paper, stuffed toys and pictures of the victims.

Meanwhile, Dubai-based Emirates, the Middle East’s largest carrier, said Sunday it has stopped flying over Egypt’s Sinai until more is known about the crash of the Russian airliner.

It joins two major European airlines, Germany’s Lufthansa and Air France, that announced following the crash Saturday that they would immediately stop flying over Sinai for safety reasons until the cause of the crash was determined.

The officials will also be shown the plane’s data and cockpit voice recorders, she said.

Also joining the effort on Sunday were officials from France’s BEA accident investigation agency, involved because the Airbus A321-200 jet was designed in France. The team included six technical advisers from Airbus. The BEA said the team would also be joined by two investigators from its German counterpart BFU, because the plane was manufactured in Germany, and four investigators from its Russian counterpart MAK, because the plane was operated by a Russian company.

More than 100 workers with Russia’s Emergencies Ministry were at the crash site helping to search for bodies and examine debris. Russian officials said the rescue teams need to comb 16 square kilometers (over 6 square miles) to search for victims’ bodies and plane wreckage.

The Egyptian Cabinet said Sunday that 163 bodies have so far been recovered and sent to morgues in Cairo.