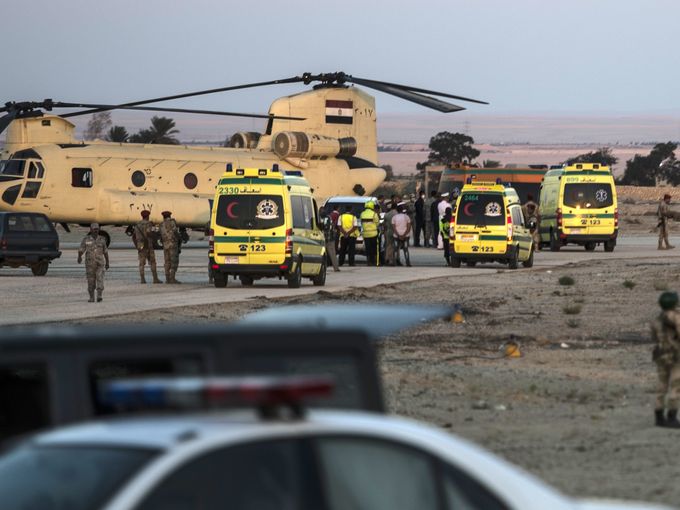 Egyptian ambulances carrying the corpses of Russian victims of a Russian passenger plane crash in the Sinai Peninsula, off load the bodies into a military aircraft at Kabret Military Base by the Suez Canal. Khaled Desouki, AFP/Getty Images
Share:

A militant group affiliated to Islamic State in Egypt claimed responsibility for the downing of a Russian passenger plane that crashed in Egypt’s Sinai peninsula on Saturday, the group said in a statement circulated by supporters on Twitter.

The claim of responsibility was also carried by the Aamaq website which acts as a semi official news agency for Islamic State.

“The fighters of the Islamic State were able to down a Russian plane over Sinai province that was carrying over 220 Russian crusaders. They were all killed, thanks be to God,” the statement circulated on Twitter said.

The Airbus A321, operated by Russian airline Kogalymavia under the brand name Metrojet, was flying from the Sinai Red Sea resort of Sharm el-Sheikh to St Petersburg in Russia when it went down in a desolate mountainous area of central Sinai soon after daybreak, the aviation ministry said.

According to FlightRadar24, an authoritative Sweden-based aviation tracking service said the aircraft, having made an apparently smooth take off, lurched into a rapid descent shortly at about 6,000 (2,000 metres) feet per minute after approaching cruising altitude.

“I now see a tragic scene,” an Egyptian security officer at the scene told reuters by telephone. “A lot of dead on the ground and many who died whilst strapped to their seats.

“The plane split into two, a small part on the tail end that burned and a larger part that crashed into a rock. We have extracted at least 100 bodies and the rest are still inside,” the officer, who requested anonymity, said.

Sinai is the scene of an insurgency by militants close to the IS militant group, who have killed hundreds of Egyptian soldiers and police and have also attacked Western targets in recent months.

Russia, an ally of Syrian President Bashar Al Assad, launched air raids against opposition groups in Syria including IS on September 30.

Civil Aviation Minister Mohamed Hossam Kemal was quoted in a cabinet statement as saying it was too soon to determine the cause of the crash. Security sources said there was no indication the Airbus had been shot down or blown up.

Egyptian Prime Minister Sherif Ismail was heading to the crash site in the Hassana area 35 km (22 miles) south of the Sinai Mediterranean coastal city of Al Arish with several cabinet ministers on a private jet, the tourism ministry said.

The A321 is a 185-seat medium-haul jet in service since 1994, with over 1,100 in operation worldwide and a good safety record. It is a highly automated aircraft relying on computers to help pilots stay within safe flying limits.

Emergency services and aviation specialists quickly began an inspection of the wreckage for any patterns of damage that could point to the cause. One of two flight recorders was quickly found, but wreckage was scattered over a wide area.

The security officer said 120 intact bodies had been found.

“We are hearing a lot of telephones ringing, most likely belonging to the victims, and security forces are collecting them and putting them into a bag,” he said.

The aircraft took off at 5:51 a.m. Cairo time (0351 GMT) and disappeared from radar screens 23 minutes later, Egypt’s Civil Aviation Ministry said in a statement. It was at an altitude of 31,000 feet (9,400 metres) when it vanished from radar screens.

The Russian RIA news agency, citing sources at Sharm El Sheikh, said: “The pilot contacted the dispatcher and reported technical problems, asking for a change of the route and a landing at Cairo airport, after which communication was broken.”

State-run television station Rossiya 24 reported that officials were searching the airline’s offices in Moscow and had seized some documents.

Russia has a poor air safety record, with charter operators often under pressure to book to capacity on ageing jets in a bid to cut costs. 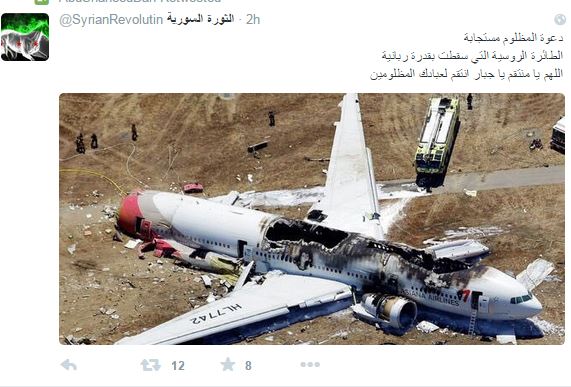