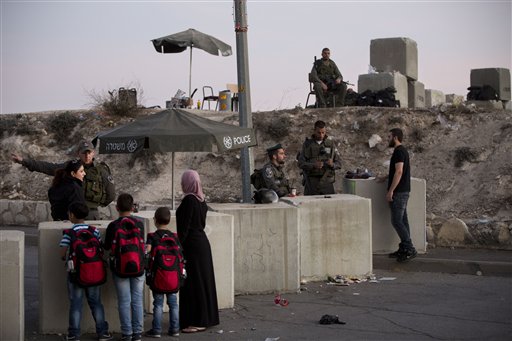 The government’s review of the status of these neighborhoods, home to tens of thousands of people, illustrates the fragile position of Palestinians in a city where they have long suffered discrimination and are caught between the pragmatic conveniences of living under Israeli control and the loyalties to the Palestinian cause.

With few exceptions, Jerusalem’s Palestinians are not Israeli citizens, and instead hold residency status that can be revoked. Removing residency rights en masse appears highly unlikely due to legal hurdles and domestic and international opposition. But government critics said the fact that it is even being discussed sent an ominous message to Palestinians.

“There is nothing permanent about permanent residency,” said Yudith Oppenheimer, executive director of Ir Amim, an advocacy group that promotes coexistence and equality in the city. “This is another reminder for them how conditional that status is.”

Prime Minister Benjamin Netanyahu ordered the review at a recent meeting called to discuss a wave of Israeli-Palestinian violence that has roiled the area in the past month. About a third of the city’s 300,000 Palestinians live in these neighborhoods.
An official who attended the meeting said the review would look at “all the issues” affecting these neighborhoods, including residency rights, which are coveted by Palestinians because they allow them to work and move freely inside Israel and gain access to Israeli health care and social services. The official, speaking on condition of anonymity because he was not authorized to discuss internal deliberations, said the latest violence had exposed a “vacuum” in these outlying neighborhoods, which have a minimal Israeli presence but are not considered West Bank territory.

Israel has responded with a crackdown in Palestinian neighborhoods, deploying thousands of security forces and placing roadblocks and military-style checkpoints at the entrances. The new review of those areas that lie outside the separation barrier has increased Palestinian fears that they are not wanted.

“We are part of the Palestinian people. We are Jerusalemites, and we will remain in Jerusalem until a political solution is found,” said Munir Izghayer, a community leader in the Kufr Aqab neighborhood.

Israel captured then-mainly Arab east Jerusalem in the 1967 Middle East war. After the war, it redrew Jerusalem’s municipal boundary, expanding it into the West Bank to encompass what were then small Palestinian communities, and annexed the lands that were made part of the city as part of its capital.

The annexation was never internationally recognized, and few Palestinians applied for Israeli citizenship, viewing it as acceptance of an illegitimate occupation.

Today, Jerusalem is an open city, and thousands of Palestinians work in the more affluent western part. But interaction between Jews and Arabs is largely superficial, and Arab neighborhoods suffer from neglect and poverty, with overcrowded classrooms, pothole-ridden roads and limited municipal services.

The situation is especially dire in neighborhoods outside the separation barrier.

Israel built the barrier in the 2000s in response to a wave of suicide bombings and other deadly attacks. In Jerusalem, the structure slices through some Arab neighborhoods and places others on the West Bank side altogether.

With development tightly restricted by Israel, Arab neighborhoods inside the barrier have seen real estate values skyrocket in recent years due to a housing crunch.

As a result, areas outside the barrier have experienced a wave of unregulated construction as people search for cheaper housing within municipal boundaries, since leaving the city for nearby West Bank communities could result in a loss of residency rights.

“They are building everywhere here to find places for poor Jerusalemites to live in because if they move to the West Bank, their IDs will be taken” said Mohammed Samarah, a 59-year-old unemployed restaurant worker, pointing to a new 12-story high-rise in Kufr Aqab.

Although these outlying neighborhoods are considered part of the city, residents must pass through checkpoints in order to reach jobs, hospitals and holy sites in the heart of east Jerusalem. Israeli work crews rarely venture beyond the barrier, fearing confrontations with the local population. Last year, some areas had limited or no running water for weeks.

Samarah, who grew up in Jerusalem’s Old City, said he now fears that Israel is plotting to take away his residency rights, which include unemployment assistance of about $600 a month. Since 1967, Israel has stripped some 14,000 Palestinians of residency, mostly in cases of people who have moved away, even to the West Bank, for more than seven years.

“I’m very concerned about my ID. The only way to protect it is to go and live inside Jerusalem, but I don’t have money. It’s very expensive to live out there. I will wait and see,” he said.

But most important, he said he was concerned about losing his connection to the Old City — site of the Al-Aqsa Mosque, an important Palestinian national symbol that has been at the center of the latest unrest.

“I want the ID to go to the Old City, to the Al-Aqsa Mosque, to the place of my childhood,” he said.

Netanyahu’s office declined to comment on his plans. Mayor Nir Barkat’s office also refused to discuss Netanyahu’s latest proposal, though in the past the mayor has said he has worked hard to narrow the gaps between the city’s western and eastern sections.

The odds of Israel actually taking action appear slim. Israeli leaders often brag about keeping Jerusalem unified, and dividing the city, even its outlying parts, would likely run into opposition from nationalists who dominate Netanyahu’s coalition.

Emanuel Gross, a law professor at the University of Haifa, said the plan would require passage of a new law in parliament and could also violate international law. “This is not a simple thing,” he said.

Asked about the proposal on Monday, U.S. State Department spokesman John Kirby urged Israel to avoid “provocative actions and rhetoric,” and said stripping people of their rights “would certainly be of concern to us.”

Oppenheimer, the coexistence activist, said suggestions that these neighborhoods could simply be turned over to the West Bank failed to recognize the deep Palestinian connection to Jerusalem.

“They moved to these areas because they insisted on being Jerusalemites, and this is the only way they can maintain their Jerusalem status,” she said. “We cannot deny all these ties to the city, cut them off from the city, and think they will become something else.”
ASSSOCIATED PRESS