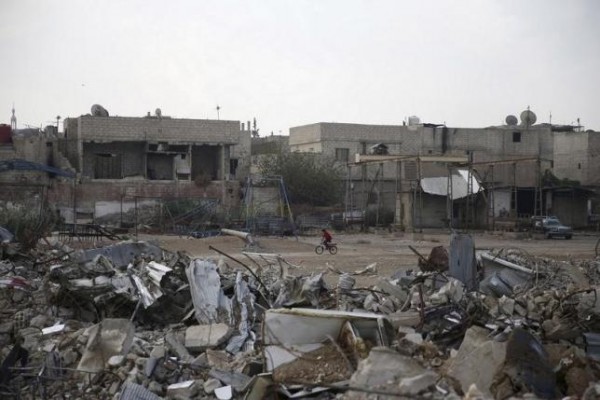 A resident rides a bicycle near damaged buildings in the town of Douma, eastern Ghouta in Damascus, Syria October 26, 2015. REUTERS/Bassam Khabieh
Share:

France will host talks on the Syria conflict on Tuesday with representatives from the United States, Europe, Jordan and Turkey but without Syria’s allies Russia and Iran, the foreign ministry said.

So far all diplomatic efforts to end the Syrian conflict have foundered over the demand by the United States, European countries, Arab states and Turkey that Syrian President Bashar al-Assad leave power as a pre-condition for peace, which he refuses to consider.

The three-way war between Assad, rebels and Islamist militants has killed more than 250,000 people and driven millions from their homes, triggering Europe’s biggest refugee crisis since World War Two.

France was not involved in the latest round of Syria talks in Vienna last Friday.

Along with counterparts from allies Saudi Arabia and Turkey, U.S. Secretary of State John Kerry met for two hours in Vienna with Sergei Lavrov, foreign minister of Russia, which has transformed the momentum in the 4-year-old Syrian civil war by bombing Assad’s enemies.

The U.S. State Department’s number two official Anthony Blinken will be in Paris for the meeting.

The meeting is expected to focus on the fight against the Islamic State, the protection of civilians, and the proposal for a United Nations Security Council resolution France plans to put on the table this week.

The resolution is aimed at stopping Syrian President Bashar al-Assad’s forces from using barrel bombs against his population. Barrel bombs are steel drums full of shrapnel and explosives dropped from the air.