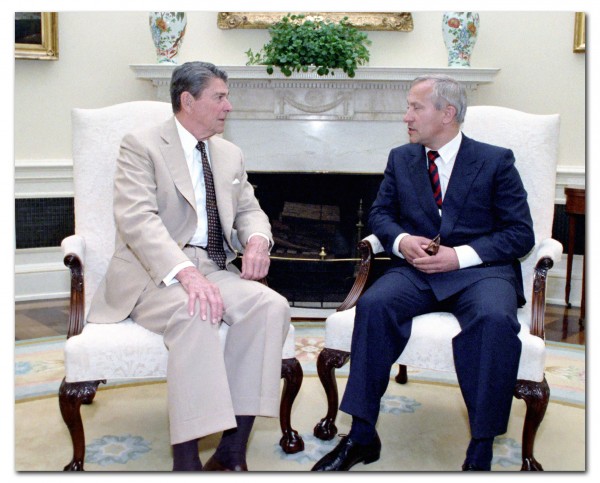 By David E. Hoffman
A nuclear weapons command exercise by NATO in November 1983 prompted fear in the leadership of the Soviet Union that the maneuvers were a cover for a nuclear surprise attack by the United States, triggering a series of unparalleled Soviet military re­sponses, according to a top-secret U.S. intelligence review that has just been declassified.

“In 1983, we may have inadvertently placed our relations with the Soviet Union on a hair trigger,” the review concluded.

That autumn has long been regarded as one of the most tense moments of the Cold War, coming after the Soviet Union shot down a South Korean civilian airliner in September and as the West was preparing to deploy Pershing II intermediate-range and ground-launched cruise missiles in Europe in November. But there has been a long-running debate about whether the period known as the “war scare” was a moment of genuine danger or a period of bluster for propaganda purposes.

The review concluded that for Soviet leaders, the war scare was real, and that U.S. intelligence post­mortems did not take it seriously enough.

Soviet leaders were particularly alarmed about the NATO exercise, known as Able Archer, carried out in early November 1983 involving forces­ that stretched from Turkey to Britain. Conducted annually to practice the procedures involved in the run-up to a nuclear conflict, the exercise had some new wrinkles that year, including planes that taxied out of hangars carrying realistic-looking dummy warheads, the review said.

The 109-page document, titled “The Soviet ‘War Scare,’ ” was dated Feb. 15, 1990, and written for the President’s Foreign Intelligence Advisory Board, a White House unit that examined intelligence issues. The authors of the review scrutinized classified documents and conducted 75 interviews with U.S. and British officials.

Originally stamped “Top Secret” and containing sensitive signals intelligence, the review was declassified this month in response to a request from the National Security Archive, a non­governmental organization affiliated with George Washington University.

The PFIAB review found that the Soviet Union took unusual military and intelligence precautions at the time of Able Archer that previously had been employed only in actual crises. This included placing air forces­ in East Germany and Poland on higher alert, conducting significantly more reconnaissance flights, and tasking Soviet KGB and military intelligence officers around the world to be on the lookout for signs of nuclear war preparations.

The Soviet actions “strongly” suggest that “Soviet military leaders may have been seriously concerned that the US would use Able Archer 83 as a cover for launching a real attack,” the review concluded. It added that the evidence “strongly indicates that the war scare was real, at least in the minds of some Soviet leaders.”

Some details of the Soviet paranoia about a nuclear attack had come to light earlier, including reports from Oleg Gordievsky, a KGB officer who was an agent for British intelligence. Gordievsky revealed to the British the existence of a KGB intelligence-collection effort to detect indications that the West was preparing for nuclear war. Gordievsky, who defected to Britain in 1985, later published the text of some KGB directives, part of a program known as ­RYAN or ­VRYAN, the acronyms in Russian for sudden nuclear missile attack.

Andropov’s worries
Yuri Andropov, the KGB chief who later became Soviet leader, was a major source of the anxiety in Moscow about a surprise nuclear attack. In 1981, Andropov declared to a major KGB conference that the Reagan administration was actively preparing for war and that a nuclear first strike was possible. According to the review, Andropov put “strategic military intelligence” at the top of KGB collection priorities, and he hastily created a special “institute” within the KGB in 1981 to handle it.

His worries about a surprise attack were amplified by “one peculiar mode of intelligence analysis,” a KGB computer model to measure perceived changes­ in the “correlation of ­forces” between the super­powers, according to the review. The computer went online in 1979 to warn Soviet leaders when “deterioration of Soviet power might tempt a US first strike,” the review says. The computer was at the heart of the ­VRYAN system, according to the review, and thousands of pieces of security and economic data were fed into the machine. The computer model assigned a fixed value of 100 to the United States, and Soviet leaders felt they would be safe from a nuclear first strike as long as they were at least at 60 percent of the United States, and ideally at 70 percent. Reports were sent to the ruling Politburo once a month.

Soon, the computer model produced bad news. According to the review, it calculated that Soviet power had declined to 45 percent; it was felt that below 40, the Soviet Union would be “dangerously inferior.” Although “it may seem absurd” to think the Soviet leaders would put stock in such a computer model, the review concluded, “this approach may have been especially appealing to top Soviet leaders at the time” because they craved some kind of scientific evidence of the strategic balance.

By 1983, Andropov had become Soviet leader, succeeding Leonid Brezhnev, and super­power tensions were deepening. According to the review, in January 1983, the Soviet armed forces­ added a fifth level of readiness to the existing four: “Surprise Enemy Attack Using Weapons of Mass Destruction in Progress.” This fifth condition “could be declared regardless of the readiness stage in effect at the time,” the review said.

On March 8, 1983, President Ronald Reagan called the Soviet Union an “evil empire.” By late that summer, the Soviet leadership “appeared to be bracing the population for the worst.” Signs were posted everywhere showing the location of air raid shelters; broadcasts suggesting the possibility of a U.S. attack were on radio and television “several times a day,” the review says.

Soviet spokesmen accused Reagan and his advisers of “madness,” “extremism” and “criminality.” After the Korean airliner was downed, tensions grew over NATO plans to deploy the Pershing II and ground-launched cruise missiles in Europe. Near the end of 1983, the 4th Air Army, a Soviet air force unit in Poland, received orders to speed up the transfer of nuclear weapons from storage to the aircraft, with a maximum time of 25 minutes for one weapon, 40 minutes for two, according to the review.

New procedures in 1983
Able Archer was conducted every year and “routinely monitored by Soviet intelligence.” But the November 1983 version had new procedures “which we believe probably fueled Soviet anxieties,” the review found. NATO tested new communications methods, with a more graduated escalation. The Able Archer exercise also used live mobilization exercises from U.S. military forces­ in Europe, the review said. All this may have looked more realistic to Soviet spies, who were watching. Both the KGB and Soviet military intelligence were ordered on Nov. 8 or 9 to report on increased alert at U.S. bases in Europe and to check for other indications of an impending nuclear attack.

The Warsaw Pact, the Soviet-dominated defense alliance, also launched an “unprecedented” reconnaissance effort, including 36 intelligence flights, “significantly more than in previous” years. The review said these included flying over the Norwegian, North, Baltic and Barents seas “probably to determine whether US naval forces were deploying forward in support of Able Archer.” Also, the Warsaw Pact imposed a suspension of all military flight operations between Nov. 4 and 10, except for the intelligence flights, “probably to have available as many aircraft as possible for combat.”

The review notes that Soviet doctrine had called for pre­empting a NATO attack by striking first — and that the Warsaw Pact forces­ had long assumed a NATO offensive would start under cover of an exercise. “There is little doubt in our minds,” the review concluded, “that the Soviets were genuinely worried about Able Archer; however, the depth of that concern is difficult to gauge.” Some Soviet units were probably preparing a preemptive counter­attack, but at the same time, there was no overall, large-scale mobilization. This “mixed” approach reflected the deep uncertainty in the Kremlin over Western intentions, the review found.

“This situation could have been extremely dangerous if during the exercise — perhaps through a series of ill-timed coincidences or because of faulty intelligence — the Soviets had mis­perceived US actions as preparations for a real attack,” the review concluded.

In the aftermath of Able Archer, the U.S. intelligence community commissioned two post­mortems, in May and August 1984, looking back at the events. Both intelligence estimates declared: “We believe strongly that Soviet actions are not inspired by, and Soviet leaders do not perceive, a genuine danger of imminent conflict or confrontation with the United States.” This conclusion was based on the fact that the West had not seen widespread Soviet mobilization for war.

But the PFIAB review was sharply critical of both of these intelligence estimates for being “overconfident” and overly sanguine. The U.S. intelligence community, the board said, “did not at the time, and for several years afterwards, attach sufficient weight to the possibility that the war scare was real.”

This criticism goes to the heart of a long-running debate about the war scare. Intelligence officials who worked on the 1984 estimates say they were correct: The Soviet Union was making noisy gestures, not war preparations. The PFIAB review challenged that conclusion and said the estimates should not have been so categorical, that “strongly worded interpretations were defended by explaining away facts inconsistent with them.”

The PFIAB review repeatedly criticized U.S. intelligence on Soviet leaders, saying at the time of the 1984 post­­mortems that “the US knew very little about Kremlin decision­making.” It added, “Our own leadership needs far better intelligence reporting on and assessments of the mind­set of the Soviet leadership — its ideological/political instincts and perceptions.” And the review said the 1984 estimates “were over­confident, particularly in the judgments pertaining to Soviet leadership intentions — since little intelligence, human or technical, existed to support them.”

Reagan: ‘Really scary’ events
On a separate track from the two estimates, the director of central intelligence, William Casey, sent a more alarming message to Reagan in June 1984 about the war scare events. Casey’s information came from the intelligence warning staff and showed “a rather stunning array of indicators” of an “increasing aggressiveness in Soviet policy and activities.” Reagan “expressed surprise upon reading the Casey memorandum and described the events as ‘really scary,’ ” former national security adviser Robert McFarlane was quoted in the review.

The war scare marked a turning point for Reagan. He acknowledged that Soviet leaders may have harbored true fears of attack.

He wrote in his diary on Nov. 18, 1983: “I feel the Soviets are so defense minded, so paranoid about being attacked that without being in any way soft on them, we ought to tell them no one here has any intention of doing anything like that. What the h–l have they got that anyone would want.”

Reagan later recalled in his memoir, “Three years had taught me something surprising about the Russians: Many people at the top of the Soviet hierarchy were genuinely afraid of America and Americans. Perhaps this shouldn’t have surprised me, but it did. In fact, I had difficulty accepting my own conclusion at first.”

He said he felt that “it must be clear to anyone” that Americans were a moral people who, since the founding of the nation, “had always used our power only as a force for good in the world.”

“During my first years in Washington,” Reagan said, “I think many of us in the administration took it for granted that the Russians, like ourselves, considered it unthinkable that the United States would launch a first strike against them. But the more experience I had with the Soviet leaders and other heads of state who knew them, the more I began to realize that many Soviet officials feared us not only as adversaries but as potential aggressors who might hurl nuclear weapons at them in a first strike; because of this, and perhaps because of a sense of insecurity and paranoia with roots reaching back to the invasions of Russia by Napoleon and Hitler, they had aimed a huge arsenal of nuclear weapons at us.”