New Russian military might on full display in Syria 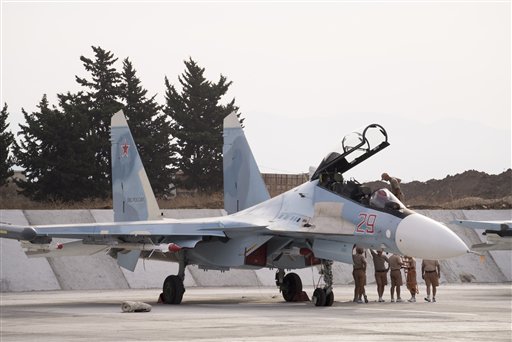 In this photo taken on Thursday, Oct. 22, 2015, Russian air force personnel stand near a Russian war plane at Hemeimeem airbase, Syria. Nearly a quarter of a century after the Soviet collapse, the air campaign in Syria has proven that the resurgent Russian military machine could again operate far away from the nation’s borders. (AP Photo/Vladimir Isachenkov)
Share:

Sleek combat jets loaded with precision bunker-buster bombs roar into the skies as soldiers in mint desert-style uniforms march past rows of neat housing at this Russian military base at one of Syria’s largest airports.

The air campaign in Syria, Russia’s first military action outside the former Soviet Union since the war in Afghanistan, shows a revamped Russian military, which sharply differs in both capability and mindset from the old, Soviet-style force.

It is capable of quickly projecting power far from Russian borders, widely uses drones and precision weapons, and cares about soldiers’ comfort.

The thunder of Syria’s civil war couldn’t be heard at Hemeimeem, located in the coastal province of Latakia which has largely been spared the chaos and destruction of more than 4 1/2 years of fighting.

A small group of foreign journalists visiting the base this week could see a dozen Su-24 bombers taking off into the night with a deafening roar, piercing the darkness with scarlet flames from their engines.

Such missions were impossible just a few years ago, when the Russian air force had few planes capable of hitting targets at night.

As part of President Vladimir Putin’s sweeping military modernization program, the air force received hundreds of new and modernized aircraft, all equipped with state-of-the art electronics on a par with U.S. and other NATO jets.

“All aircraft here at the base are equipped with targeting systems that allow hitting targets with pinpoint precision,” said Defense Ministry spokesman, Maj.-Gen. Igor Konashenkov.

He dismissed Syrian opposition claims that the Russian airstrikes killed civilians as “sheer nonsense,” saying that the aircraft hit ammunition depots, bunkers and other targets away from populated areas.

The ministry has released cockpit video to support its claims, just as the Pentagon did during the two Gulf wars.

Latakia, the heartland of Syrian President Bashar Assad’s Alawite minority, offers the Russian military a safe environment — and a warm welcome from people blaring car horns and chanting “thanks” in Russian.

At a refugee camp in Latakia, which houses several thousand mostly Alawite refugees from other provinces of Syria, smiling kids shouted: “Thank you, Putin!”

Warmly greeted by the locals and at a safe distance from the frontline, soldiers at the base look calm and relaxed.

Soldiers at the base are visibly proud of their crisp new uniforms and comfortable sand-colored high boots, a stark contrast with the drab Soviet-style military attire worn until recently.

On a typical day, each jet flies several sorties during the day and at night.

Konashenkov shrugged off U.S. criticism of targeting moderate rebel groups fighting Assad instead of focusing on the Islamic State group, the main goal declared by the Kremlin.

He argued that it doesn’t matter which of the myriad militant groups owns facilities making suicide belts and rigging trucks with explosives for suicide missions, which the Russian warplanes target.

In another break with the old Russian military tradition, the Hemeimeem base’s planners took care of the troops, a marked departure from Soviet-style neglect of soldiers’ comfort.

The neat rows of housing units, each holding from two to eight men depending on rank, are equipped with air-conditioning, a must in scorching heat. There are plenty of wash cabins available too.

A field kitchen and a canteen look immaculately clean, a sight to shock anyone familiar with crude ways of the old-style Russian military.

At the base’s water treatment unit, Lt.-Col. Alexander Yevdokimov spoke enthusiastically about a multi-layer filter system that purifies Syrian tap water to the highest drinking standard and prevents any threat of chemical or bacteriological contamination. “Please try it, it tastes really good!” he told reporters.

The base bakes its own bread, and cooks prepare no-frills but filling Russian dishes. An army store offers souvenirs, cosmetics and clothing, and smiling attendants at a nearby coffee shop sell candies, cookies and ice cream delivered from Russia.

Konashenkov, a veteran of the war in Chechnya and other post-Soviet conflicts, is keen to point at the progress the military has made.

“Remember Chechnya, where everything was covered in dirt,” he says, pointing at the base’s freshly paved grounds that help keep uniforms and housing units clean.

Officers at the base say its comfortable layout and well-thought of logistics reflect personal care of Russian Defense Minister Sergei Shoigu, who is widely popular in the ranks unlike his predecessor, Anatoly Serdyukov.

Serdyukov, who was ordered by Putin to streamline the bloated and under-funded military after the 2008 Russian-Georgian war, conducted painful cuts of the officer corps and some other radical changes, but was eventually sacked amid growling in the ranks.

The military welcomed the appointment of Shoigu, who had served as Russia’s emergencies minister for two decades and won a reputation as one of the few officials who could actually get things done.

A latecomer to Putin’s inner circle, Shoigu has developed strong personal ties with the president. They went fishing together, and the defense minister now seems to be one of the few officials whom Putin particularly trusts.

Spending on the military increased under Shoigu’s leadership, financing hundreds of new aircraft and missiles and the commissioning of numerous other new weapons.

The armed forces have held a series of massive exercises, engaging hundreds of thousands of troops and hundreds of aircraft across vast areas from the Baltics to the Pacific and from the Caspian to the Arctic.

The drills paid off when Putin moved to annex Crimea. Within hours, waves of Russian transport planes airlifted special forces that quickly blocked Ukrainian troops at their bases without firing a shot. The swift operation took the West by surprise.

Unlike the past, when the military’s post-Soviet meltdown forced the Kremlin to rely increasingly on nuclear weapons, it has grown more confident about its conventional forces.

The rapid deployment of a sizable expeditionary force by sea and air, an air campaign in which dozens of jets relentlessly pounded targets round the clock for weeks and the launches of long-range cruise missiles from the Caspian were intended to send a clear message: Russia’s military could rival U.S. operational capability.

In recent remarks, Putin pointed at the launch of 26 cruise missiles from Russian navy ships in the Caspian at targets in Syria 1,500 kilometers away as a signal to the U.S. that Russia can pack a similar punch.

Konashenkov, the Russian Defense Ministry spokesman, shrugged off the Pentagon’s claim that four of the missiles crashed in Iran.

“All those targets (in Syria) must have exploded all by themselves then,” he said with a sardonic smile, insisting that every missile hit its target.