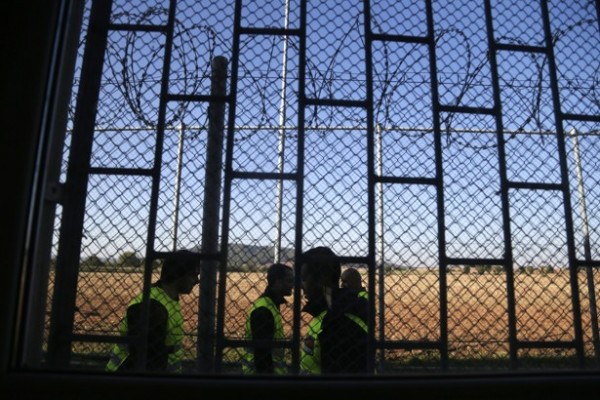 Guards walk past a razor wire fence securing a former prison in Drahonice, Czech Republic, Friday, Oct. 2, 2015. Anticipating a possible influx of migrants in the country, the Czech Republic is turning the prison into a new detention center for up to 240 of them. (AP Photo/Petr David Josek)
Share:

U.N. human rights chief Zeid Ra’ad al-Hussein accused the Czech Republic on Thursday of committing systematic human rights violations by detaining refugees for up to 90 days and strip-searching them for money to pay for their own detention.

Human rights violations “appear to be an integral part of a policy by the Czech Government designed to deter migrants and refugees from entering the country or staying there,” he said in a statement.

The Czech Republic lies to the north of the main migration routes taking refugees through the Balkans to Germany. It has seen only a fraction of the hundreds of thousands passing through Hungary and Austria on their flight from war or poverty.

Those who come through the Czech Republic have mostly been detained, some for weeks if authorities do not manage to return them to the country they arrived from. Very few claim asylum in the Czech Republic. Many continue their journey to Germany upon release.

The Czech government says the detentions are legal and they are continuously trying to improve conditions in the centers.

“We are improving conditions for refugees and we do not think that we are breaching any directives or rules that bind us by international treaties,” Interior Minister Milan Chovanec told reporters in reaction to the U.N. statement.

“I expect that we will get a written report (from the U.N.) from which we will be able to define what (the criticism) is about.

The Czechs voted last month in a small minority against quotas to distribute asylum seekers across the European Union, putting them on collision course with EU partners.

Zeid expressed alarm that the country’s detention policy was accompanied by increasingly xenophobic public statements, including “Islamophobic” statements by President Milos Zeman and a public petition “Against Immigration” launched by his predecessor Vaclav Klaus.

Zeman rejected the criticism and his spokesman said: “The president has long warned of the threat of Islamic fundamentalism. He stands by his opinion and he will not change it under pressure from abroad.”

The U.N. refugee agency UNHCR says the vast majority of those making the northward journey from Turkey through Greece, often hoping to reach Germany, are refugees rather than economic migrants, and have a right to protection and asylum.

Most come from Syria, and Zeman has warned that they would impose sharia law once they had reached their destination, stoning women to death for adultery and chopping thieves’ hands off.

“We will lose women’s beauty because they will be covered head to toe in burqas, with only a fabric net over the face,” the CTK news agency quoted him as saying last week.

Zeman’s views reflect those of Hungarian Prime Minister Viktor Orban, who has vowed to protect Christian values by fighting to stem immigration from Muslim countries.

The center-left Czech government has not used similar rhetoric to that of the 71-year-old president, but remains unique in detaining refugees for so long – routinely for 40 days and sometimes for 90, Zeid said.

“International law is quite clear that immigration detention must be strictly a measure of last resort,” he said. Detaining children “on the sole basis of their migration status, or that of their parents, is a violation, is never in their best interests, and is not justifiable,” he said.

Courts had released people who had challenged their detention, but most did not know their rights and were unable to exercise them, partly because their mobile phones were taken away when they were detained, Zeid said.

They were often destitute on their release after being strip-searched for money to pay the daily cost of 250 Czech crowns ($10.46) for their detention, often in poor conditions, he said.