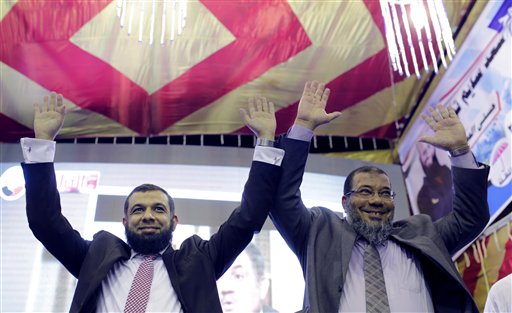 In this Wednesday, Oct. 14, 2015 photo, Amr Mekky, left, and Ashraf Thabet, parliamentary candidates of the Al-Nour Party, greet their supporters during a campaign rally in Alexandria, a stronghold of the ultraconservative Salafis, Egypt. The Al-Nour Party, ultraconservative Muslims who supported the army’s overthrow of an Islamist president in 2013, are aiming for the political center to gain votes, trying to appear more open while glossing over their role in suppressing the Islamists. (AP Photo/Amr Nabil)
Share:
Democracy International said on Friday it would monitor Egypt’s parliamentary elections but has scaled back its plans after having trouble getting visas for all its staff.

Egyptians will begin voting on Sunday in long-awaited elections, the final step in a process that aimed to put the country back on a democratic course but which critics say has been undermined by state repression.

The voting will take place over two rounds on Oct 18-19 and Nov 22-23, with two sets of run-offs in constituencies where no clear winner has emerged.

It said that without the necessary and appropriate visas for its accredited observers it would not be able to conduct the comprehensive observation it originally expected to carry out.

Egypt’s foreign ministry did not immediately respond to requests for comment.

Independent monitoring of Egypt’s parliamentary election is expected to be limited because of pressure from the government on non-governmental organizations and civil society groups.

The Carter Center, for example, closed its Egypt office a year ago and said at the time it would not be monitoring future polls as the political space had narrowed to the extent that elections could not advance a genuine democratic transition.

Egypt has been without a parliament since June 2012 when a court dissolved the democratically elected main chamber, then dominated by the Muslim Brotherhood, reversing a major accomplishment of the 2011 uprising that ended Hosni Mubarak’s 30-year rule.

As army chief, Abdel Fattah al-Sisi ousted elected President Mohamed Mursi of the Brotherhood the following year, banning Egypt’s oldest Islamist movement, and jailing thousands of its members alongside the youth activists at the forefront of the 2011 revolt. Sisi went on to win a presidential vote in June last year.

The Brotherhood is banned and not taking part in the latest polls and smaller opposition parties are struggling to make their voices heard.