Palestinians set fire to Jewish shrine, as Hamas calls for a day of rage 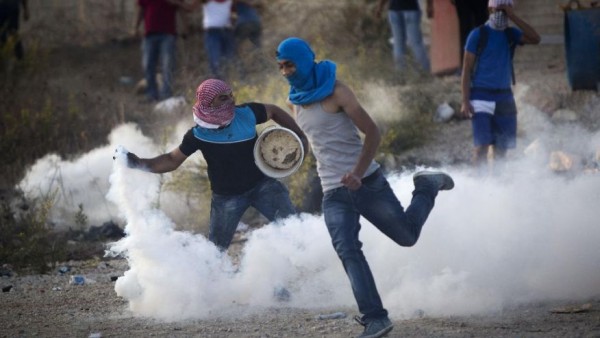 A Palestinian protester throws back a tear gas canister that was fired by Israeli troops during clashes near Ramallah, West Bank, Thursday, Oct. 15, 2015. In the current wave of violence, eight Israelis have been killed in stabbing and shooting attacks, as of Thursday. Thirty-one Palestinians have been killed, including 14 identified by Israel as attackers, and the others in clashes between stone-throwers and Israeli troops. (AP Photo/Majdi Mohammed) (The Associated Press)
Share:

Palestinians set fire to a Jewish shrine in the West Bank on Friday as the Islamist group Hamas called for a day of rage against Israel, with tensions still running high after two weeks of violence.

Israel’s military said about 100 people converged on the tomb of the biblical patriarch Joseph, which is located in the Palestinian city of Nablus. They were pushed back by Palestinian security forces who arrived on site, but not before setting parts of it ablaze.

“We view this incident with gravity and strongly condemn any attack on holy sites. We will find and arrest those who set the fire,” the military said in a statement.

Palestinian President Mahmoud Abbas, in his clearest call yet to end the renewed violence, condemned the attack. He ordered the damage to be repaired and opened an investigation into the arson.

A statement from his office said Abbas “stressed his rejection of these actions and all actions that violate law and order, and which distort our culture, our morals and our religion.”

The unrest that has engulfed Jerusalem and the occupied West Bank, the most serious in years, has claimed the lives of 33 Palestinians and seven Israelis.

The Palestinian dead include 10 knife-wielding assailants, police said, as well as children and protesters shot during violent demonstrations. One man died in Gaza on Friday from wounds sustained in a clash a week ago.

The Israelis were killed in random attacks in the street or on buses. There was, however, a respite from the near-daily attacks on Thursday.

The U.N. Security Council will hold a special meeting to discuss the situation. No resolution is planned for Friday, but there might be an attempt to get the council to issue a statement aimed at urging the two sides to curb the violence.

Hamas, which controls the Gaza Strip, called for “rallies of anger and confrontations” on Friday in all West Bank cities.

The unrest has been triggered in part by Palestinians’ anger over what they see as increased Jewish encroachment on Jerusalem’s al-Aqsa mosque compound, which is also revered by Jews as the location of two destroyed biblical Jewish temples.

The director-general of Israel’s foreign ministry, Dore Gold, said: “The burning of Joseph’s tomb forcefully demonstrates what would happen in the holy places in Jerusalem if they were in the hands of the Palestinian leadership.”

U.S. Secretary of State John Kerry has said he plans to travel to the Middle East soon to try to calm the violence.