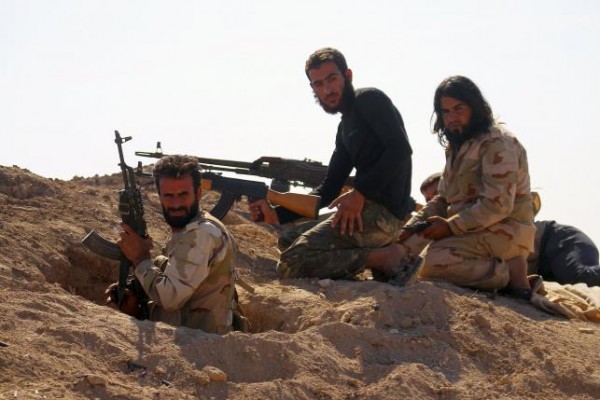 Rebel fighters carry their weapons as they take positions in the town of Kafr Nabudah, in Hama province, Syria, on which forces loyal to Syria’s President Bashar al-Assad are carrying out offensives to take control of the town, October 11, 2015. REUTERS/Ammar Abdullah
Share:
U.S. forces airdropped small arms ammunition and other supplies to Syrian Arab rebels, barely two weeks after Russia raised the stakes in the long-running civil war by intervening on the side of President Bashar al-Assad.

Last week, Washington shelved a program to train and equip “moderate” rebels opposed to Assad who would join the fight against Islamic State.[:nL1N1221MR]

The only group on the ground to have success against Islamic State while cooperating with the U.S.-led coalition is a Kurdish militia, the YPG, which has carved out an autonomous zone in northern Syria and advanced deep into Islamic State’s stronghold Raqqa province.

On Monday, the YPG announced a new alliance with small groups of Arab fighters, which could help deflect criticism that it fights only on behalf of Kurds. Washington has indicated it could direct funding and weapons to Arab commanders on the ground who cooperate with the YPG.

Syrian Arab rebels said they had been told by Washington that new weapons were on their way to help them launch a joint offensive with their Kurdish allies on the city of Raqqa, the de facto Islamic State capital.

The U.S. military confirmed dropping supplies to opposition fighters vetted by the United States but would say no more about the groups that received the supplies or the type of equipment in the airdrop.[:nL1N12C115]

The Russian intervention in the four-year Syrian war has caught U.S. President Barack Obama’s administration off guard. Washington has been trying to defeat Islamic State while still calling for Assad’s downfall.

Russian President Vladimir Putin was rebuffed in his bid to gain support for his country’s bombing campaign, with Saudi sources saying they had warned the Kremlin leader of dangerous consequences and Europe issuing its strongest criticism yet.

The head of Syria’s Nusra Front, an offshoot of al Qaeda, took aim on Monday at the Russian intervention, urging insurgents to escalate attacks on the strongholds of Assad’s minority Alawite sect in retaliation for what he called Russia’s indiscriminate killing of Muslim Sunnis.

Describing Russia’s action as a new Christian crusade from the east that was doomed to fail, the audio message from Abu Mohamad al-Golani posted on YouTube said: “The war in Cham (Syria) will make the Russians forget the horrors of what they faced in Afghanistan.”

“The new Russian invasion is the last dart in the weaponry of the enemies of Muslims and the enemies of Syria,” said Golani, whose extremist Muslim Sunni fundamentalist group is one of the most powerful forces fighting Assad’s government.

Putin met Saudi Defense Minister Mohammed bin Salman on the sidelines of a Formula One race in a Russian resort on Sunday.

On Monday, Russian Foreign Minister Sergei Lavrov said those talks, along with discussions with the United States, had yielded progress on the conflict, although Moscow, Washington and Riyadh did not agree in full “as yet”.

A Saudi source said the defense minister, a son of the Saudi king, had told Putin that Russia’s intervention would escalate the war and inspire militants from around the world to go there to fight.

Riyadh would go on supporting Assad’s opponents and demand that he leave power, the source said, speaking on condition of anonymity.

They were unable to agree on whether Assad should have any role in ending the crisis, but they did decide to extend sanctions by essentially freezing the assets of the spouses of senior Syrian figures.

“The recent Russian military attacks … are of deep concern and must cease immediately,” ministers said in a strongly worded statement. The war has taken 250,000 lives and caused a refugee crisis in neighboring countries and Europe.

Moscow says it targets only banned terrorist groups in Syria, primarily Islamic State. In its briefings, it describes all of the targets it strikes as belonging to Islamic State.

But most strikes have taken place in areas held by other opposition groups, including many that are supported by Arab states, Turkey and the West in a war that has also assumed a sectarian dimension with Shi’ite Iran at odds with Saudi Arabia’s Sunni rulers.

Syrian government forces and their allies from the Lebanese Shi’ite militia Hezbollah, backed by Iranian military officers, have launched a massive ground offensive in coordination with the Russian air support.

They fought their fiercest clashes on Monday since the assault began, advancing in strategically important territory near the north-south highway linking Syria’s main cities.

Russian warplanes carried out at least 30 air strikes on the town of Kafr Nabuda in Hama province in western Syria, and hundreds of shells hit the area.

The Syrian army announced the capture of Kafr Nabuda and four other villages in Hama province. It also said the army had seized Jub al-Ahmar, a highland area in Latakia province that will put more rebel positions in the nearby Ghab Plain within range of the army’s artillery.

The U.N. diplomat trying to convene talks to end the war said he would hold talks in Russiaon Tuesday and then in Washington.