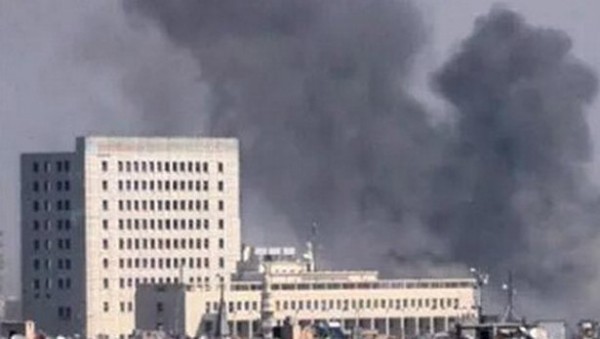 Russian President Vladimir Putin slammed Washington for refusing to cooperate on Syria, saying “some of our partners simply have mush for brains”.

“How is it possible to work together?” he asked in Moscow, adding that the United States declined to share intelligence on Syria.

He pledged that Moscow’s air war, which began on September 30, would have dire consequences.

“The war in Syria will make the Russians forget the horrors that they found in Afghanistan,” Jolani said, adding: “They will be shattered, with God’s permission, on Syria’s doorstep.”

Russia has said its raids are targeting Al-Nusra’s jihadist rival the Islamic State group and other movements, and the defence ministry said it had hit 86 “terrorist” targets in Syria since Monday.

Putin took issue with the arms drop, saying the weapons could end up in the wrong hands.

Jolani urged armed opposition groups to shelve their differences until both air campaigns had been defeated.

“Delay the disputes until the demise and smashing of the Western Crusader and Russian campaign on Syrian land,” he said.

He also called on armed groups to “hurl hundreds of rockets” daily at villages of Assad’s Alawite minority sect.

Tuesday’s rocket attack on the Russian embassy in Damascus sparked panic among some 300 demonstrators waving Russian flags and pictures of Putin.

The Britain-based Syrian Observatory for Human Rights said the rockets were fired from the eastern edges of the capital, where Islamist rebels are entrenched.

“Two rockets hit embassy territory at 10:15 am. No one was killed or wounded,” Russian news agency Interfax quoted an embassy official as saying.

Foreign Minister Sergei Lavrov told reporters in Moscow it was an “act of terror”.

On Tuesday he was meeting the UN’s Syria envoy Staffan de Mistura in Moscow for the first time since the Kremlin launched its bombing campaign.

According to the Observatory, 12 civilians including two children were killed and dozens wounded in government air strikes on Eastern Ghouta, a rebel stronghold east of Damascus.

It said seven civilians including four children were killed in a village in northern Aleppo province in what were probably Russian air strikes.

Elsewhere, fierce overnight fighting in the key village of Kafr Nabuda in the central province of Hama forced pro-regime forces to retreat and killed 25 of them.

The Observatory also said Hezbollah fighters arrived in the strategic Sahl al-Ghab plain to reinforce a regime offensive there.

Sahl al-Ghab, at the intersection of Hama, Latakia and Idlib provinces, has been a major target for Russian air strikes.

The Observatory said thousands of Iranian fighters and supplies had reached Hmeimim airport in Latakia province, where all civilian flights have ceased and which is now used for military operations.

A military source told AFP the decision was taken because of the high levels of “traffic” from military aircraft.

On the Israeli-occupied sector of the Golan Heights, the Jewish state’s military said it responded to two stray rockets from Syria by targeting two regime military posts.

It warned Israel would not tolerate rockets fired across the border, “intentional or not”.