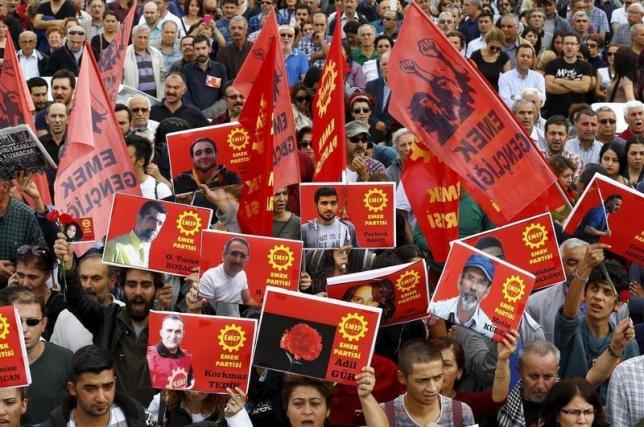 Members of the left-wing Turkish Labour Party (EMEP) shout slogans as they carry pictures of the victims of Saturday’s bomb blasts during a commemoration in Ankara, Turkey, October 11, 2015. REUTERS/Umit Bektas – RTS3YMR
Share:

Turkey is targeting Islamic State in investigations of a double suicide bombing in Ankara that killed up to 128 people, officials said on Sunday, while opponents of President Tayyip Erdogan blamed him for the worst such attack in Turkish history.

Government officials made clear that despite alarm over the attack on a rally of pro-Kurdish activists and civic groups, there would be no postponement of November polls Erdogan hopes can restore an overall majority for the AK Party he founded.

Thousands of people gathered near the scene of the attack at Ankara’s main railway station, many accusing Erdogan of stirring nationalist sentiment by his pursuit of a military campaign against Kurdish militants, a charge Ankara vehemently rejects.

“Murderer Erdogan”, “murderer police”, the crowd chanted in Sihhiye square, as riot police backed by water cannon vehicles blocked a main highway leading to the district where parliament and government buildings are located.

The pro-Kurdish Peoples’ Democratic Party (HDP), a major presence at Saturday’s march and holding seats in parliament, said police attacked its leaders and members as they tried to leave carnations at the scene. Some were hurt in the melee, it said in a statement.

The attacks have shocked a nation beset by resurgent conflict with the militant Kurdistan Workers Party (PKK) in its southeast and increasingly threatened by spillover from the war in neighboring Syria.

Islamic State fighters are encamped close to its borders, which mark also the frontier of the NATO alliance, and last week Russia launched air strikes in Syria, its planes violating Turkish air space on several occasions.

Two senior security sources said initial signs suggested Islamic State was behind the Ankara attack, and that it bore striking similarity to a July suicide bombing in Suruc near the Syrian border, also blamed on the radical Islamists.

“All signs indicate that the attack may have been carried out by ISIL (Islamic State). We are completely focused on ISIL,” one of the sources told Reuters.

CHP opposition leader Ahmet Kilicdaroglu, speaking after a meeting with Prime Minister Ahmet Davutoglu, said he had been told both suicide bombers were men.

State-run Anadolu Agency said police detained 43 suspects in operations targeting the Islamic State across Turkey from Sanliurfa in the southeast to Izmir in the west and Antalya on the south coast. It was not clear when they were held.

The Haberturk newspaper reported police sources as saying the type of explosive and the choice of target pointed to a group within Islamic State known as the ‘Adiyaman ones’, referring to Adiyaman province in southeast Turkey.

Turkey is vulnerable to infiltration by Islamic State, which holds swathes of Syrian land abutting Turkey where some two million refugees live. But the group, not normally reticent about its attacks, made no claim to the Suruc bombing and has made no reference to the Ankara attack in internet postings

The HDP, which expanded beyond its Kurdish voter base and drew in mainly left-wing opponents of Erdogan at June elections, said the death toll had risen to 128 and that it had identified all but eight of the bodies.

The prime minister’s office said late on Saturday that 95 people had been killed.

The scale of the casualties eclipsed attacks blamed on al Qaeda in 2003 when two synagogues, the Istanbul HSBC Bank headquarters and the British consulate were hit, killing 62 people. Questions have been raised over whether a parliamentary election due on Nov. 1 can be safely held.

Some direct their suspicions at militant nationalist groupings, with or without ties to the state, who are opposed to any concession to Kurdish demands for greater minority rights.

HDP leader Selahattin Demirtas said the government had blood on its hands, accusing it of failing to fully investigate the Suruc bombing or another attack on an HDP election rally in the southeastern city of Diyarbakir on the eve of the last parliamentary election in June.

But government officials made clear that, despite the security concerns, elections would go ahead.

“Postponing the elections as a result of the attack is not on the table at all, even as an option. The elections will be held on Nov. 1 as planned,” one senior official told Reuters, speaking on condition of anonymity as the government observes three days of national mourning.

“Because of the rising risks, the security at election rallies, which is already being increased, will be raised further. The election will be held in a secure way.”

Erdogan hopes the AK Party he founded will regain the overall majority it had held since 2002, but lost at June elections, partly because of the success of the HDP.

After meeting Davutoglu on Sunday, main opposition CHP leader Kemal Kilicdaroglu said he told the prime minister that the interior and justice ministers must resign over the bombings and that the HDP’s Demirtas should not be sidelined.

The bombs struck seconds apart as crowds gathered for a planned march to protest over the deaths of hundreds since the collapse in July of a ceasefire between security forces and the rebel PKK, which is deemed a terrorist group by the United States and the EU as well as Turkey. Some 40,000 have been killed since the insurgency began in 1984.

The government has shown no sign of stopping its war against the PKK, even after the militant group on Saturday ordered its fighters to halt attacks on Turkish soil. The government dismissed the declaration as a ploy.

Turkish warplanes struck PKK targets in northern Iraq and southeastern Turkey on Saturday and Sunday, and security sources said some 30-35 PKK guerrillas were killed in the northern Iraqi raids on Sunday alone.

“The PKK ceasefire means nothing for us. Operations will continue without a break,” a senior security official said.

Newspaper headlines reflected a mixture of grief and anger.

“We are in mourning for peace,” said the front-page headline in the secularist Cumhuriyet newspaper. “Scum Launch attack in Ankara,” said the Haberturk newspaper. “The goal is to divide the nation,” said the pro-government Star.