Russia steps up air strikes against rebels (not I.S.) in Syria, monitors 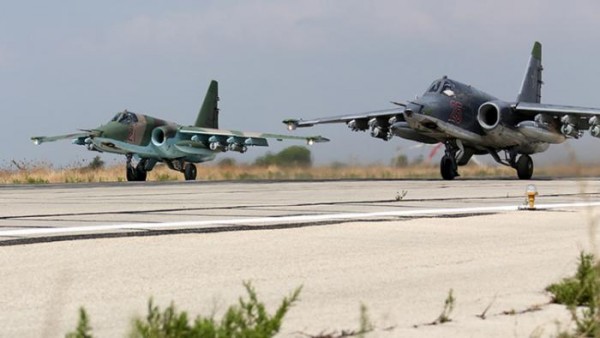 Russia said on Saturday it had stepped up its bombing campaign against Islamic State militants in Syria, while local observers said several of the air strikes had hit areas in western Syria where the hardline group has little presence.

Russia, a top ally of President Bashar al-Assad, started bombing in Syria on Sept. 30 saying it was targeting Islamic State and other opposition groups, a campaign that has drawn Moscow deeper into Syria’s more than four-year-old conflict.

Rebels on the ground and Western states have said Moscow’s air campaign, which has been combined with ground attacks by pro-government forces, have mainly targeted rebel groups not associated with Islamic State, including U.S.-trained fighters.

Defense officials from the United States and Russia held a 90-minute video conference call on Saturday to discuss safe flight operations over Syria, according to the Pentagon, which is concerned that dueling bombing campaigns could lead to accidental clashes without the proper precautions.

Already, at least one U.S. warplane has had to change its route to avoid a close encounter with Russian planes, the Pentagon has said.

“The discussions were professional and focused narrowly on the implementation of specific safety procedures,” the U.S. Department of Defense said in a statement released on Saturday. “Progress was made during the talks, and the U.S. agreed to another discussion with Russia in the near future.”

The representative, Major-General Igor Konashenkov, described the targets hit as controlled by Islamic State, also referring to them as belonging to “militants” and “terrorists”.

He said they included command and control centers, weapons depots and training bases, located in the Syrian provinces of Raqqa, Hama, Damascus and Aleppo.

The first of those provinces is in eastern Syria and the main Islamic State stronghold, while the other three are in Western Syria where the group is typically weak.

However, Islamic State militants have been advancing on Aleppo in recent days, seizing villages in the province from rival insurgents.

Konashenkov said one of the targets hit near Aleppo was a concealed base for military vehicles, which he said had received a direct hit from an Su-24M bomber.

More than ten vehicles had been destroyed, including two tanks and five infantry vehicles, he said in comments cited by Interfax.

There was no immediate information on casualties.

The Observatory says Islamic State has no real presence in these areas. However, there were other militants in northern Syria, such as Chechens, that Russia might want to attack.

Syrian state television said in a newsflash that attacks carried out by government forces in the area had killed and wounded a number of “terrorists”, a term it uses to describe all insurgents in Syria.

The Observatory said a large explosion hit a building on the outskirts of the town of al-Bab in northern Syria, which is held by Islamic State.

It was not immediately clear what caused the blast in the building, which Islamic State had used to store explosives, according to the British-based Observatory, which tracks the conflict using sources on the ground.

The Observatory also said Syrian government forces backed by militia had captured the village of Atshan from insurgent fighters in Hama province after Russian airstrikes in surrounding areas.

Atshan sits to the east of the north-south highway running through major western cities inSyria. Towns and villages around the road have been a focus of Russian air strikes.

Human Rights Watch said late on Friday that the first Russian air strikes on northern Homs last month killed at least 17 civilians and should be investigated for possible violations of the laws of war.

Russian President Vladmir Putin said earlier this month that reports of civilian deaths in Russian air strikes on Syria were an “information attack”.