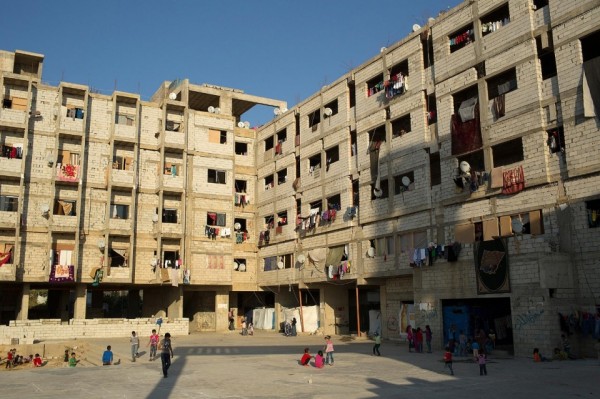 They fled Syria as a community but now face the threat of being once again displaced, this time from sanctuary they have found in Lebanon.

In Lebanon’s southern city of Saida, also known as Sidon, more than 130 refugee families take shelter in a half-built university.

Some have lived there for more than three years, with most hailing from a small village near Daraa in southwestern Syria.

Yet with the owners of the site keen to re-start building imminently, and Lebanon’s laws making life tough for refugees seeking a place to live, this precarious existence is once again under threat.

Little more than a shell

The university site first became a home shortly after the start of the Syrian war and is now among the biggest permanent sites housing refugees in Lebanon.

Though initially little more than a shell, with the help of aid agencies it gradually became liveable.

Temporary partitions were put up to create homes for the families, who also had on-site access to a mosque and – until recently – education.

And amid news of hundreds of thousands of refugees desperately risking their lives to make it into Europe, one of the residents explained he was grateful for the space.

“Even though we have narrow rooms, it works for us,” said Walid Abu Hafez.

“This is better than dying in the sea or being homeless somewhere.”

But now, Walid and his community face the threat of eviction.

The owners of the site, which was to be a new campus for the Imam Ouzai University, had initially allowed the refugees to live in the space rent-free.

Last year, as pressure grew for some kind of payment, the UNHCR and NGO Premiere Urgence-Aide Medicale Internationale (PU-AMI), stepped in.

After that, if they cannot pay, the families will be expected to leave.

A representative of the owners explained that the Islamic university – which offers low-cost courses aimed at the underprivileged – could not attract funding unless the site was vacant.

Accommodating the refugees was “originally only supposed to be for a month,” he said, adding “we are not against the refugees, but their demands [for accommodation].”

The Ouzai complex community is but a large-scale example of the many ways Syrians have had to find shelter in Lebanon since fleeing the war.

Over a four year period, some 1.2 million refugees have sought sanctuary in the country.

But the legacy of the permanent settlement of Palestinian refugees in Lebanon has left the state wary, and formal camps are illegal.

As such, refugees are spread across both informal tented settlements, or, more commonly, living among Lebanese in often poor accommodations.

Many lived in homes “not applying to a good standard of living,” leading to health problems, said PU-AMI’s Tarek Daher, who added that the host community was also negatively affected by the influx of demand for accommodation.

But though the site owners said they would accept significantly increased rent, PU-AMI’s wider model for helping refugees find adequate shelter was based on paying one year’s rent alone.

A small number of the most vulnerable families would be assisted in finding new housing.

But Daher said his aid agency could not make an overall exception for refugees at Ouzai, noting that the families there had been given advance notice to find new homes and explaining that many refugee families living in the rest of Lebanon have to pay rent as a matter of course.

With one deadline for eviction already past, residents are left wondering what will happen at the end of November.

Khaled Turki said it was beyond him and others living in the complex to come up with the money themselves.

Pointing to sharp cuts in cash assistance from aid agencies, and recent rules introduced by the government that required them to pledge not to work, he asked:

“What can we do? I have no money, and how can I get the money? Stealing? I just want shelter.”

Meanwhile, Walid Abu Hafez fears that being kicked out of Ouzai will mean he and his family will be forced to sleep on the streets.

All he wants, he told VOA, is some certainty and stability.

“We don’t know what’s going to happen from one day to the next. I have seven children. How will I raise them?”
VOA