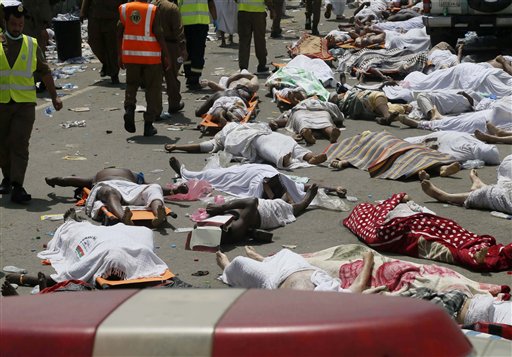 FILE – In this Thursday, Sept. 24, 2015 file photo, bodies of people who died in a crush in Mina, Saudi Arabia during the annual hajj pilgrimage lie in a street. Hundreds were killed and injured, Saudi authorities said. The crush happened in Mina, a large valley about five kilometers (three miles) from the holy city of Mecca that has been the site of hajj stampedes in years past. A new tally shows last months crush and stampede at the Saudi hajj was the deadliest event to ever strike the annual pilgrimage. The Associated Press count Friday, Oct. 9, 2015, shows at least 1,453 people died Sept. 24 in Mina. Saudi officials have said their official figure of 769 killed and 934 injured in the disaster remains accurate. (AP Photo, File)
Share:
One survivor of last month’s crush and stampede at the hajj in Saudi Arabia recalled seeing so many bodies that he couldn’t tell how many there were.

The Associated Press sought to answer that question, arriving at a death toll of at least 1,470. That made the Sept. 24 disaster the deadliest accident ever at the annual pilgrimage. And hundreds remain missing.

The AP count is 701 higher than Saudi Arabia’s official tally of 769 killed and 934 injured in the Sept. 24 disaster in Mina, a few miles from the holy city of Mecca.

Saudi officials, who could not be immediately reached for comment Friday, previously have said their tally remains accurate, although an investigation into the causes of the tragedy is ongoing. Authorities have not updated their casualty toll since Sept. 26.

The hesitancy to acknowledge a higher toll may reflect the leadership’s reflex to clamp down on information as it struggles with multiple pressures. The kingdom is dealing with a war in Yemen, Russia’s entry into the Syrian conflict and low oil prices that are straining the budget — and the hajj tragedy is already opening it up to sharp criticism from opponents, particularly Iran.

The previous deadliest-ever incident at the annual hajj happened in 1990, when a stampede killed 1,426 people. Stampedes and crushes are a major danger at the hajj since it attracts more than 2 million pilgrims a year, all moving simultaneously in close quarters through a number of rituals over the course of five days.

The AP figure comes from statements and officials’ comments from 19 of the over 180 countries that sent citizens to the five-day annual pilgrimage.

Authorities have said the crush and stampede occurred when two waves of pilgrims converged on a narrow road, causing hundreds of people to suffocate or be trampled to death.

Mohammed Awad of Sudan told the AP at the time that he and his 56-year-old father were separated in the pushing and shoving. The 36-year-old pilgrim later found him alive under at least 10 bodies.

“You can’t count how many bodies there were. They were stacked high,” Awad said.

Any disaster at the five-day hajj, a pillar of Islamic faith, could be seen as a blow to the kingdom’s cherished stewardship of Islam’s holiest sites. This season saw two tragedies — the stamped and the Sept. 11 collapse of a crane at Mecca’s Grand Mosque that killed 111 people.

Shiite-led Iran, the kingdom’s top rival in the region, has blamed the disaster on the kingdom’s “mismanagement” of the pilgrimage. The Islamic Republic also has called for an independent body to take over the hajj.

Experts say there’s no way that will happen. Patronage of Mecca and Medina is one cornerstone of the Al Saud family’s legitimacy. Among King Salman’s titles — as it was for his predecessors — is the Custodian of the Two Holy Mosques, referring to sites in the two cities.

“The Saudis are not for a nanosecond going to entertain any proposals to share management of the hajj with other states,” said Hani Sabra, the head of the Middle East practice at the Eurasia Group. Still, he said, the hajj deaths “reinforces a view that at this moment, Saudi Arabia looks weak.”

The delay in announcing new figures may come from wanting not wanting to fuel more criticism from Iran, or because of the kingdom’s traditional top-down governance.

Despite Iran’s sharp rhetoric over the deaths, other countries have been far more muted. That is likely due to Saudi Arabia’s powerful influence, including years of patronage using its oil wealth, and because the kingdom can set the quota of pilgrims each country can send to the hajj.

“This is really unfortunate that in an event where people are dead, the families don’t have any kind of transparency,” said Madawi al-Rasheed, a visiting professor at the London School of Economics and Political Science’s Middle East Center.

“Unfortunately for these Muslim countries, they are at a weaker position,” he said, “and a lot of them worry about future pilgrimages, where they might not get the full quota allocated to them.”

That kind of hesitancy about criticism has been seen in Pakistan. Earlier this week, Pakistan’s Electronic Media Regulatory Authority sent text messages to executives at independent television networks, warning them that criticism of Saudi Arabia could be viewed as illegal under the country’s constitutional prohibitions on affecting relations with “friendly countries.”

But Saudi Arabia will maintain its “monopoly” over the hajj, even though it will likely face larger and larger crowds as time goes on, said Jon B. Alterman, a senior vice president at the Washington-based Center for Strategic and International Studies.

“The challenge is not so much that it happened but how do you respond?” Alterman said. “Saudi Arabia has a consistent problem developing a managerial culture. Decisions are kept very, very high in the system and people aren’t always held accountable for their failures. There have been a lot of signs over the last 20 to 30 years of trying to change that culture, but it’s very hard.”