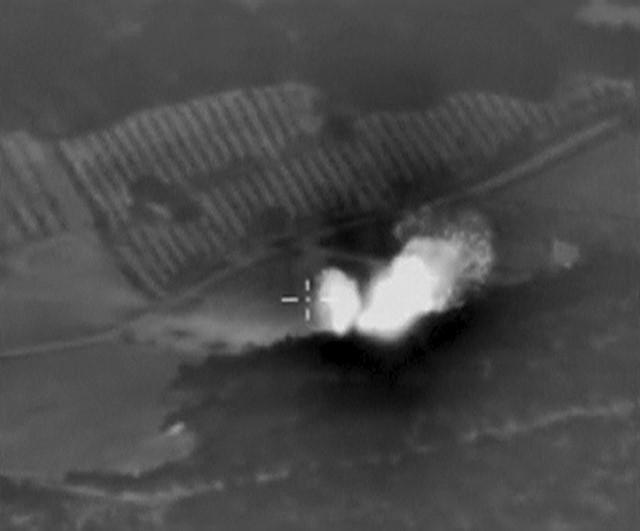 A frame grab taken from footage released by Russia’s Defence Ministry October 5, 2015, shows airstrikes carried out by the country’s air force in Syria. REUTERS/Ministry of Defence of the Russian Federation/Handout via Reuters
Share:

The Syrian army and allied militia carried out ground attacks on insurgent positions in Syria on Wednesday backed by Russian air strikes, in what appeared to be their first major coordinated assault since Moscow intervened, a monitor said.

Ground attacks using heavy surface-to-surface missile bombardments targeted at least four insurgent positions in the area and there were heavy clashes on the ground, the head of the Observatory Rami Abdulrahman said.

“There is no information yet of any (government) advances on the ground, but the air strikes have hit vehicles and insurgent bases,” Abdulrahman said.

Reuters reported last week that allies of Syrian President Bashar al-Assad, including Iranians, were preparing a ground attack in Syria.

Abdulrahman, who tracks the conflict using sources in Syria, said the ground assault was being carried out by “regime forces” and their allies, with no immediate sign of Russian involvement on the ground.

Syrian state media and regional pro-government channels made no mention of new Russian strikes or the ground attacks on Wednesday.

Russia, a top ally of Assad, started air strikes in Syria a week ago, saying they were targeting hardline Islamic State militants.

But fighters on the ground and Western countries have said the Russian campaign is mainly focusing on other rebel groups that have seized government-held areas in the west in recent months, and is aimed at shoring up Assad rather than combating hardliners.

Russia’s strikes on Wednesday targeted the towns of Kafr Zita, Kafr Nabudah, al-Sayyad and the village of al-Latamneh in Hama province and the towns of Khan Shaykhun and Alhbit in Idlib, the Observatory said.

Most of Idlib province is held by an insurgent alliance that includes al Qaeda’s Syria wing Nusra Front and other Islamist factions.