Russia to step up air strikes in Syria 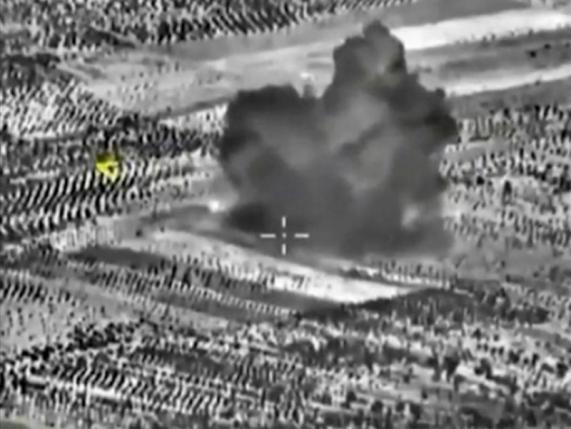 A frame grab taken from footage released by Russia’s Defence Ministry October 3, 2015, shows smoke rising after airstrikes carried out by Russian air force on what Russia says was a bomb factory in Maarat al-Numan, south of the town of Idlib, Syria. REUTERS/Ministry of Defence of the Russian Federation/Handout via Reuters
Share:

Russia said on Saturday it will step up air strikes in Syria, escalating a military intervention which Moscow says is weakening Islamic State militants but which Western powers say aims to support President Bashar al-Assad.

A senior Russian military officer said Russian jets based in western Syria had carried out more than 60 sorties in 72 hours across Syria. “We will not only continue strikes… We will also increase their intensity,” said Andrei Kartapolov from the Russian army General Staff.

Russia’s air campaign in Syria, where a U.S.-led air coalition and fighters on the ground from regional states are already entangled in a four-year-old civil war, has drawn strong criticism from the United States and its allies.

President Barack Obama, wary of military commitments in the Middle East after America’s costly war in Iraq, warned President Vladimir Putin he was defending a crumbling authoritarian ally and could be sucked into a “quagmire”.

Britain’s defense minister said that only one in 20 Russian air strikes in Syria were aimed at the hardline Islamic State forces, which control large parts of eastern Syria and western Iraq.

Michael Fallon accused Russia of dropping unguided munitions on civilian areas, and against Assad’s Western and Gulf-backed enemies. Russia says that it is targeting Islamic State with precision bombs, and that the raids are having an impact.

“The strikes were carried out around the clock from the Hmeymim air base along the whole depth of the territory of Syria,” Kartapolov said, referring to an airport near Syria’s Mediterranean coast where Russian jets are based. “Over three days we were able to undermine the terrorists’ infrastructure and significantly reduce their military potential.”

The British-based Syrian Observatory for Human Rights said at least 39 civilians had been killed since the start of the Russian air strikes on Wednesday. It said 14 fighters, mostly Islamic State militants, had also been killed.

Russia said in the last 24 hours it had targeted a command post and underground weapons bunker near Raqqa, the eastern Syrian stronghold of the Islamic State militants, as well as a weapons store in Maarat al-Numaan.

Maarat al-Numaan, in Syria’s northern province of Idlib, is not known as an Islamic State base. Most fighters in the area are from the al Qaeda-linked Nusra Front, the Islamist Ahrar al-Sham and other insurgent groups, according to the Syrian Observatory for Human Rights monitoring group.

A Syrian military source, quoted by state media, said Russian and Syrian planes destroyed a command center in Latamneh, in Hama province, where Western-backed rebels operate. They also hit a training camp and weapons depot in Maarat al-Numaan, and weapons and ammunitions stores in Jisr al-Shughour.

The Russian air strikes have hit at least four rebel factions operating under the umbrella of the Free Syrian Army which had received significant military support from states that oppose Assad, rebel fighters said this week.

Some have been trained in the use of guided anti-tank missiles as part of an assistance program that has in some cases included training overseen by the Central Intelligence Agency in countries including Qatar and Saudi Arabia.

This program is separate to the U.S. Defense Department’s train and equip program aimed at fighting Islamic State.

The anti-tank weapons, supplied by states opposed to Assad, were an important factor in insurgent advances this year.

In Maarat al-Numaan, a guided KAB-500 bomb destroyed seven vehicles as well as other facilities and weapons stores, the statement said, adding that the type of bomb was accurate to within 5 meters of its assigned target.

Rescue workers in opposition-held areas in western Syria say the strikes have killed at least several dozen civilians, including children.

In the town of Ihsim, northwest of Maarat al-Numaan, 11 people were killed in two raids, the rescue workers said. Nine of the dead were from one family. The Observatory put the casualties at 12 people killed or wounded.

A fighter operating in the Al-Ghab region in north-west Syria reported several air strikes there. “Russian warplanes hit a number of areas in the Ghab plain. They are hitting all the factions fighting Assad. The only casualties are civilians,” said Abu el Baraa al Hamawi, from Ajnaad al-Sham rebel group.

He said there were “Russian experts” at a Syrian army base in the area, as well as increasing numbers of personnel from Iran and the Lebanese group Hezbollah.

Residents in the northwestern countryside of Homs province said leaflets were dropped calling on fighters to give themselves up and promising them they would be well treated.

A Syrian military source said an Islamic State attack on the airport in the eastern city of Deir al Zor had failed, and the army had killed a large number of “terrorists”.