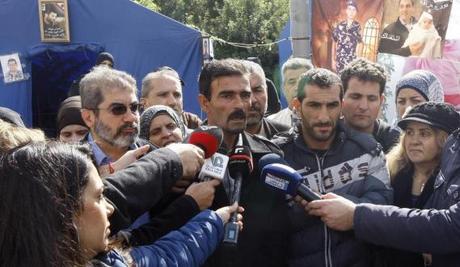 “We have heard nothing about our sons since eight months. We have information that the crisis cell is exerting no efforts currently to try and free them ,” they stated.

“Our move today is to bring the file of our kidnapped sons back to the table of dialogue until a solution is reached”.They added

“The dialogue session has convened three times and we are sure that our cause has not been addressed,” they added, in reference to the national dialogue table that Speaker Nabih Berri has been chairing

The relatives have warned a day earlier that they will take escalatory measures starting Sunday to pressure the authorities into bringing the hostages  back home.

In a statement they released on Saturday, the families accused the authorities of neglecting the cause of the soldiers and policemen who were taken hostage in the northeastern border town of Arsal in August 2014.

They said they would resort to “painful escalatory measures to reprioritize their cause.”

A few of the captives have been released and four were executed.

Negotiations  through the State of Qatar aimed at their release have stalled.